​In the midst of the flailing global economy, Philippine fast food giant Jollibee is no exception. However, Jollibee Foods Corp, responsible for 56% of the US$5 billion fast-food market in the Philippines, was struggling long before the coronavirus outbreak started.

Jollibee has captured the Filipino market since inception and trounced McDonald’s on its home turf with its signature fried chicken. On a quest to rapidly expand abroad, the company acquired US chains Smashburger and Coffee Bean & Tea Leaf Co. for a total of US$540 million. While the accelerated growth strategy succeeded in enlarging the company’s footprint to 35 countries and 6,000 stores, both acquired chains are still unprofitable in 2020. Investors’ patience is wearing thin as Coffee Bean and Smashburger continue to burn cash, and now the coronavirus outbreak is heavily weighing on sales.

Last year was already sluggish for Jollibee, as shares sank by 26% over the course of 2019. From only January to March of this year, however, shares had already nosedived almost 25% even before coronavirus had become a global pandemic. By the first week of March, Jollibee shares saw their worst performance in two decades, with $2.90 billion of market value erased since the beginning of 2019.

In 1975, an ice cream parlor was opened in Metro Manila by Tony Tan Caktiong and his family. By popular request from customers, the shop added sandwiches and meals to its menu, eventually becoming the first Jollibee restaurant by 1978. Growth followed rapidly, even when the global giant McDonald’s entered the Philippines in 1981. Jollibee firmly held its own against this first challenge, armed with its signature fried Chickenjoy, unconventional sweet spaghetti with hotdog pieces, and other dishes specifically tailored toward Filipino tastes. Now, Jollibee still controls a majority of the Philippine fast-food market with 56% of the market share, and Tan has become a forerunner of the Philippine consumer growth story.

After successfully penetrating other Asian countries, including China, the chain chased growth in the U.S. by buying Denver-based Smashburger for $210 million in 2018 and California-based Coffee Bean for $330 million in 2019. According to Jollibee President Ernesto Tanmantiong in 2017, “the ambition was to become one of the world’s top five restaurant operators and cut dependence on the Philippines.” Unfortunately, Smashburger’s unsuitable store locations and inconsistent quality were some of the contributors behind Jollibee’s 25% drop in net income in 2019.

Coffee Bean, meanwhile, is anticipated to be unprofitable until around October 2020 (perhaps longer considering the ramifications of COVID-19), and thus was consolidated into Jollibee’s financial accounts last quarter. "The deal will bring international business’ contribution to 36% of worldwide sales and will bring Jollibee closer to its vision to be one of the top five restaurant companies in the world in terms of market capitalisation,” stated Tan, Jollibee's founder and chairman, about the purchase of Coffee Bean.

Regardless of this “vision” and Coffee Bean’s contribution of 14% of Jollibee’s worldwide sales, stockholders were not convinced — shares fell 8% after the acquisition was publicized. "There is market skepticism that this purchase will be earnings accretive considering Coffee Bean’s 2018 loss is about 12% of Jollibee’s profit last year,” Rachelle Cruz, an analyst at AP Securities, told Bloomberg at the time. 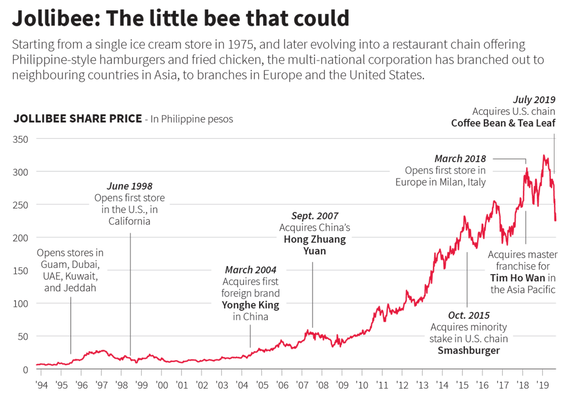 To reach Smashburger’s goal to break even by 2021, the chain is closing unprofitable stores and planning to open locations in areas with higher traffic. To lessen losses at Coffee Bean, Jollibee is beginning to address the high administrative costs. These actions are convincing some investors, such as Julian Tarrobago, the manager of $2.6 billion in equities at ATR Asset Management in Manila. He believes that these initiatives will start seeing results later this year, and that the market is undervaluing Jollibee’s actions to build wealth and a valuable brand, arguing that investors should focus on the long-term.

Tarrobago appears to be among the minority, however, as Jollibee is currently among the least-liked stocks in the Philippines. On a scale of 1-5, with 5 being a unanimous buy rating, analyst consensus tumbled to 2.67 this year, its lowest since May 2013. In 2018, it had reached a 14-year high at 4.2. The company’s valuation, with a 10-year average of 31.4 times 12-month estimated earnings, has now been discounted to 28 as of March 9th. Previously, its two-year low had been a multiple of 28.2 when Coffee Bean was acquired last July.

The coronavirus outbreak has been hitting sales in China (responsible for 7.4% of Jollibee’s sales) since the beginning of the year, and now this is continuing globally as more regions are locked down. This outbreak, in addition to consolidating Coffee Bean into its accounts, will likely erase any boost from an improvement at Smashburger or Jollibee’s Philippine locations, especially now that Luzon is strictly locked down (the region that contains Manila and over half of the Philippine population).

After this pandemic has passed, Jollibee will still have much work to do to become one of the world’s top five restaurant operators. Its capability to reverse losses at Smashburger and Coffee Bean will indicate whether it can truly become a global brand, or whether its role will always be serving homesick Filipinos overseas.