While the landscape for dealmaking is rapidly changing in the Far East, Japan is dominating the charts and taking the lead in Asia. In fact, surprisingly, Japanese firms has been the most aggressive acquirer after the US in the first nine months of the year. Companies from Japan spent a record $147 billion in overseas deals as of September, and especially deals into the US from Japan are on pace to hit the highest value ever. Overall, according to Reuters, the value of deals involving Asia Pacific companies hit a record at $801.2 billion in the first half of 2018.

Excluding Japan, value of deals in the APAC region rose by 20 percent to almost $565 billion in the first half of this year, with global dealmaking reaching $2.5 trillion, according to Reuters data. Concerns about commercial wars between the United States and China partially cooled down in the past weeks.  Even if a slowdown in China’s outbound deals was caused not just by politics in the West but also by policy changes in China, “the impact of domestic policy has now normalized” JPMorgan’s co-head of Investment Banking coverage for Asia Pacific John Hall said. 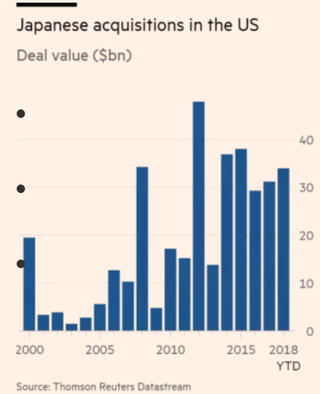 Despite the fact that the deal flow of Japanese firms has been increasing since 2014, according to advisors it seems we are transitioning to a new era. The deals rush led also Western banks such as Credit Suisse and JPMorgan to bulk up in Japan, a market which has typically been dominated by local banks with deeper local roots. To confirm these claims, Morgan Stanley’s Japan joint venture with Mitsubishi UFJ claimed the top spot in the country’s ranking for the first half. The U.S. bank also topped the Asia ex-Japan M&A league table, followed by UBS and Bank of America Merrill Lynch. Even SoftBank Group, for example, has chosen a US bank like as Goldman Sachs, alongside other Asian banks such as Nomura, Mizuho and the SMBC Nikko Securities, as underwriter for the initial public offering of its mobile-phone unit. A clear proof of the progressive rootedness of Western banks in Japan. SoftBank operation serves also as a perfect example of a not negligible feature of Japanese current deals: their size. In fact, Bloomberg News reported that the Japanese investment and technology firm aims to sell around 3 trillion yen ($27 billion) worth of shares. This would represents the biggest IPO ever, listing on the Tokyo Stock Exchange in December, as it would surpass the $25 billion Alibaba aimed to raise during its IPO back in 2014.

In Japan, the three industries driving M&A activities in the front row are pharma, tech and industrials. The key drivers of the increasing M&A activity are mainly three macroeconomic factors: shrinking home market, the stimulus of the central bank to keep low rates and the situation of domestic banks. In fact, Bank of Japan’s negative interest rate policy cut significantly the borrowing costs for Japanese companies and it deeply incentivated them to cheaply borrow money, and use it in order to finance big and ambitious deals. Cash and debt financing are also the two preferred sources of financing in Asia. Moreover, having had their margins negatively hurt by Japan Central Bank’s monetary easing program, Japanese banks started playing an active role in pushing companies to carry out important deals, promising them competitive pricing for acquisition finance. Also, a government that since 2013 has been explicit, through its ministry of economy, in its support for overseas deals, allowed the process to speed up. Moreover, Japanese corporations are realizing the fact that because of a rapidly ageing population, long-term growth has to be found outside the nation. This growth, Japanese firms’ CEO are deciding it has to be bought in.
“Currently the companies are looking overseas because they are healthy enough to purchase overseas assets. Many of the CEOs are aware that they need to make investments while they can,” says Yuki Oi, partner at law firm Nishimura & Asahi said. “Overseas M&A is definitely beginning to become a natural instinct for Japanese companies and hurdles to outbound deals are starting to disappear,” says Koichi Iida, chief executive of Mizuho Securities. Analysts reports predict that the volume of deals will keep increasing. If these previsions will be confirmed true, among possible winners there would be for sure Japanese banks.

In 1988, in the middle of a financial bubble, the $2.6bn purchase of the US tyremaker Firestone by Bridgestone was the biggest overseas deal Japan had ever done. It forced a worldwide rethink of the shared belief that Japan was only committed to internal growth. Today, in 2018, exactly 30 years later, Japan has done it again. With a 25 times bigger deal, in fact, Takeda’s $65 billion takeover offer for Shire marked a cornerstone of this new era for Japan. While Firestone was a “nice to have” overseas purchase, everything Japan does from now on is more of a “must have”. 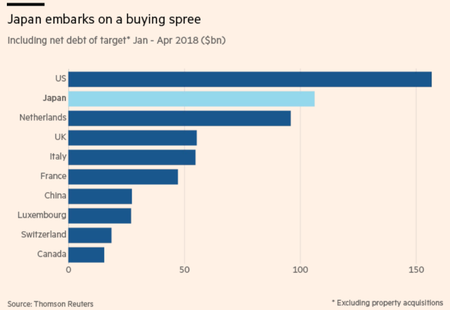 Japanese firms feel they have to act now, if they do not want to miss the opportunity to take advantage of the cheap financing. However, if as finance always tells us “there ain't no such thing as a free lunch”, nothing comes without a price.  In fact, as some analysts point out, the risk over-reach is remarkable. Critics say that too aggressive bank loans might end up creating a moral hazard where companies stretch their resources in order to acquire their targets. For instance, according to Moody’s, Takeds’s takeover of Shire will increase its debt six-fold.

Two years after Bridgestone bought Firestone, its acquisition drove to a $350 million loss. The year after that, Firestone’s losses hit $500 million, dragging the parent’s profits close to zero. However, today, thirty years later, Bridgestone is the largest tyremaker in the world by sales, and that deal was regarded as its key driver. Eventually, in order to draw proper macro-conclusions from this Japanese developing market situation, we might have to wait another 30 years.