In the wake of the WHO’s recognition of Coronavirus as a “global pandemic”, including over 3.045 confirmed cases and 60 linked deaths in 49 out of 50 American states, Trump administration declares the state of National Emergency.

Doors are open to a special legislation aimed at allocating initial 50 billion dollars of federal aids in public health available to affected cities, as well as providing paid sick leave, arrange support teams and making the testing accessible to the large-scale population. N.B.A. and Major league were suspended, schools shut down for several weeks, Broadway and Disneyland turned their lights off. It follows the presidential ban on flights from Continental Europe and travel restrictions imposed to non-American citizens.

Throughout this haywire week, financial markets have been in involved in days of tumultuous trading, as the fear-based equities sell off deepens, retrieving memories from the Great Recession. These shockwaves, besides being an explicit symptom of the Coronavirus outbreak, are also a critical cause of harm for the US economy in its entirety, light years away from the outmoded initial 2020 U.S. outlook of a Goldilocks economy. Differently from other countries, the Federal Reserve promptly responded with colossal initiatives, but additional anti-infective fiscal and financial measures might be necessarily implemented.

Following this, Donald Trump’s primetime European travel restriction, and Lagarde’s decision to hold interest rate, had severe repercussion in terms of global markets volatility and uncertainty. As a matter of fact, on March 12, US stocks collapsed in the worst day since Black Monday in 1987. Shortly after its opening, the S&P 500 tumbled by 7% and forced a 15-minutes halt in trading. The tremendous share prices fall persisted: despite the Fed first promises to respond through the revival of Repo operations, the benchmark index experienced its quickest fall into bear market territory since its last market peak, dated Feb 19, plunging by 9.5% to 2,480.64. Likewise, Nasdaq Composite slid of 9.4% to 7,201.80.
Downturns were reported also in Crude oil. Given its scarce demand, an additional shock is added to the already escalating tensions among OPEC + members. Saudi Arabia intention to suddenly increase supply by 25% dragged WTI weekly price down of 30%, to 31.50 USD per barrel, an all-time low since the Gulf War.
This wild week of trading ended on Friday with an upward correction of stocks fueled by Trump and world leaders' pledge to adopt serious stimulus to counteract the contagion economic impact. However, this final rebound in US equities exemplifies how volatility is reverberating across the entire market, and it is unreasonable to believe it will subside in the immediate future. Indeed, the week's last half hour of trading clearly showed a surge of risk appetite, sending the S&P 500 up to 2,711, DJIA to 23,185.62, and the Nasdaq Composite up by +7.86%. Sign of revival have been shown in commodities, with the WTI costlier of 1.43 USD per barrel, and Natural Gas raise in share value of 2.28% despite the precedent week.

On March 16, the Cboe Volatility Index, known as the “fear gauge,” which measures expected volatility in pricing the S&P 500 out-of-the-money options, jumped to 82.69, hovering around the highest levels since November 2008. 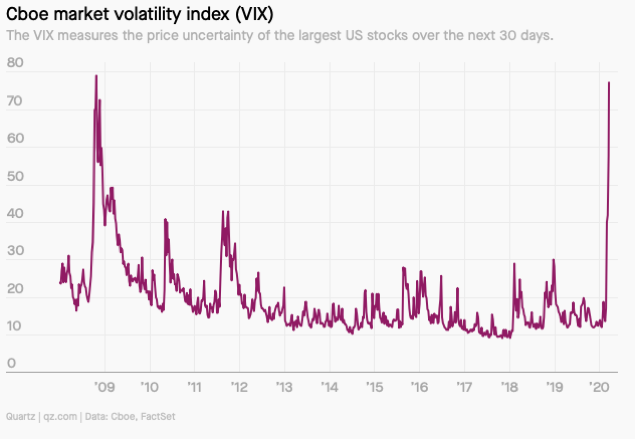 Source: Factset
Despite having always been highly demanded as a "safe haven" to hedge risk against stock investments, the most desired one jointly with US treasuries, even the Comex Gold's climb slowed down of 3.85% selling at 1.529,10 USD. Correspondingly, the rising anxiety and investors' retreats is a clear measure of non-negligible exposure of the debt market.

Wild swings in yield and liquidity shortages in US Treasuries market
​
Concerns over economic activity and expectations of looser monetary policy by the FED triggered a flight towards US treasuries whose yields eventually started to head down.
The US Treasury markets represents the bedrock of all other financial markets since interest rate for other types of bonds are based on the treasury yields and it’s also a fundamental instrument through which the US government can fund itself. March 3 marked an historical event for global finance since the 10-year treasury yield dipped below the threshold of 1% for the first time ever and has hit its all-time low of 0.318% on March 9.

Nevertheless, during this last week it has been increasingly affected by unusual and unexpected trains. Indeed, many analysts point out that, being treasuries the easiest tradable assets, investors unloaded them to offset losses and hedge risk in stock investments. This should hold as an explanation for a very unusual pattern we observed for two consecutive sessions, on Feb 11 and 12: the 10-year Treasury yield climbed up to the current +0.98 and stocks prices plummeted.

Sharp swings in yields contributed to widen significantly the spread between the prices at which dealers were willing to buy and sell US government debt and exposed the treasury market to severe liquidity shortages. This creates strong uncertainty for the position of UST leveraged investors that buy cash Treasury securities and sell interest rate futures to speculate on difference in price between these two assets since the former usually trade at a slightly cheaper value. However, BoA Corp. strategists highlighted that, as the decline in liquidity worsens, UST investors are forced to leave their positions in treasuries and prompted similar investors to do the same.

Major banks and asset managers are also concerned that the trading distress may be also induced by the prevalence of work-from-home arrangements as a numerous trader are isolated at home and they will hardly step in by taking risk to provide liquidity.

The deterioration and malfunctions of the US sovereign bond market finds confirmation in one key gauge of Treasury liquidity, market depth, that fell to levels last seen during the 2008 financial crisis in 10-year and 30-year Treasury markets.

Source: Bloomberg
For what concerns the US Treasury Department, strategists from JP Morgan and BofA suggested the initiation by the government, for the first time after 2002, of the Buy-Back program, essential to restore access into the UST market. This consists in large scale buybacks of old bonds (off-the-securities) that are more difficult to trade in an illiquid market using the proceeds from newly issued debt (on-the-run securities).

Fed’s response: “QE4 is here”
​
The Fed prefers to promote growth than preventing inflation. Its underlying funds rate controls short-term interest rates, such as the Libor and banks’ prime rate. Consistently, alongside with US stocks, repo rates have gyrated with the virus outbreak, and in order to lift them up to 1.28 %, an emergency rate cut was levied last March 3. The reduction amount to 0.5%, lowering the current value to a range of 1-1.25%. The Federal Open Market Committee, in order to creates favorable conditions for federal aids, further eased the stance of monetary policy in its yesterday’s meeting, by pushing down the target rate to 0-0.25%.

In response to those highly unusual disruption, setting aside routinely weighted and calm tones when facing a declared alarm, Chairman Jeremy Powell opted for adopting extraordinary funding, injecting 1.5 trillion dollars split in three tranches. In fact, the cash will be added to money markets through 2 three-month market repurchase agreement and 1 one-month repos for $500 billion each, conducted between last Thursday and Friday. The manoeuvre will prance the assets portfolio in the Fed balance sheet of 35 % more compared to the actual 4.2 trillion dollars, reaching an all-time high.

Its main objective is to foster smooth Treasury market functioning and efficient and effective policy implementation, given the severe imbalances hitting US treasuries and the debacle of stock exchanges by the day. The priority is to avoid crisis such that, if not dammed, would become potential panic tides capable of triggering contractions. 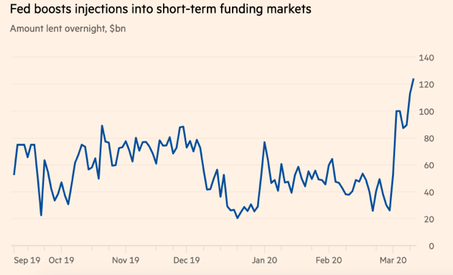 Source: Financial Times
On top of raising at least at $175 billion daily overnight repo operations until April 13, the New York arm commits to expand its current $60 billion reserve-management purchase to assets at different range of maturities, for instance Treasury bills, floating-rate notes, nominal coupons and mortgage-backed securities. In addition to its toolkit, it will issue a minimum of $45 billion in two-week loans twice a week, for the same timeframe.

Need for a fiscal bazooka?
​
In a scenario of financial turmoil, investors completely entrusted central bankers in providing support and stimulus to financial markets by leveraging on their monetary policy toolkit, mainly interest rate cuts and quantitative easing. Nevertheless, it seems this era is now probably over as investors are questioning the effectiveness of the interventions put in place by the FED to calm market volatility and solve the cracks in the US Treasury market.
Skepticism arises from the fact that a dovish monetary policy will not reduce the rate of infection nor will reconstruct a disrupted supply chain and, along with expectations of a recession, may only contribute to increase the risk premia without having a concrete effect on consumer demand.

These doubts are reinforced by those who believe that the economic impact of the virus could only be tackled through a multi-faceted intervention that, besides central bankers, include governments and health-care professionals.

The burden thus passes to the US government that now has the duty to tailor a stimulus package based on coordinated fiscal policies, considered more effective in protecting consumers and businesses. The most possible measures of government assistance are tax cuts, cash payments to household and increase federal spending. On March 14, the House of Representative approved a new “multi-billion” legislation that expand unemployment and federal spending for Medicaid as well as granting two weeks of sick leave and paid family and medical leave up to three months.