O​n October 13th, 2018, L3 and Harris Corp, two of the main US providers of defense electronics and communication technology, agreed on an all-stock merger that will create the United States’ sixth-largest defense contractor with a combined market value of $34 billion.

Source: United States Defense Budget Overview 2019
According to the two groups involved, the combined company will be a leader in defense technology with estimated net revenues in 2018 of $16 billion, customers in over 100 countries and about 48,000 employees. The deal is expected to be closed in mid-year 2019, they added.

One of the main reasons for the merger is the increased defense spending under U.S. President Donald Trump, a strong rationale to pursue consolidation for aerospace and defense contractors in order to take advantage of more scale to bid on bigger projects. Indeed, the deal in question is the third significant in the sector in 2018, after the $9.6 billion acquisition of cyber security group CSRA by US defense contractor General Dynamics in April and the $9.2 billion acquisition made by defense group Northrop Grumman of rival Orbital ATK in June. 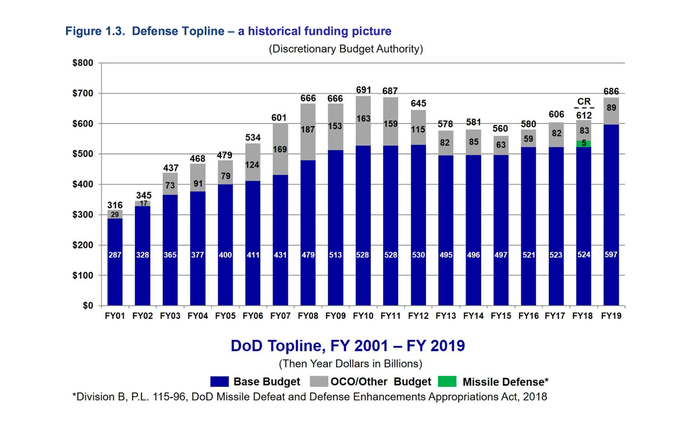 Source: gpsworld.com, Fact Sheet by Harris and L3 Technologies
​“This highly strategic combination creates a company with greater scale and a well-balanced portfolio of complementary businesses that will strengthen our capabilities across multiple domains: air, maritime, land, space and cyber,” said William Brown, Harris Chairman and CEO. “Bringing together our two engineering- and technology-focused companies will accelerate our ability to innovate and create solutions to solve our customers’ toughest mission-critical challenges in a cost-competitive and affordable way.”

The deal is expected to generate $500 million of annual pre-tax cost synergies, which will come from reducing spending, rationalizing footprint and consolidating corporate headquarters, among other things. According to Christopher Kubasik, L3 Chairman and CEO, the majority of the cost savings will come from addressing the combined company’s supply chain.

The deal will be cash EPS accretive in the first full year after the deal will be closed.
The merged group, to be called L3 Harris Technologies, will target $3 billion in Free Cash Flow by year 3, driven by organic growth, cost synergies, working capital improvements and capital expenditure efficiencies.

Under the terms of the merger agreement, L3 shareholders will receive a fixed exchange ratio of 1.30 shares of Harris common stock for each share of L3 common stock. Given the firms’ closing prices on the Friday before the deal was announced, this implied a buyout price on L3 of $201.33 per share, 2.83% above where the company had closed at previously. In response to the announcement, shares of both firms surged, with L3 soaring 11.7% and Harris climbing 10.6%.
Upon completion of the deal, Harris shareholders will own approximately 54 percent and L3 shareholders will own approximately 46 percent of the combined company on a fully diluted basis.

Furthermore, Brown will assume the role of Chairman and CEO for the first two years, with Kubasik working as Vice Chairman, President and Chief Operating Officer. Kubasik will succeed Brown as CEO after two years and as chairman after three years. The company will have a Board with 12 members, six from Harris and six from L3.

Morgan Stanley acted as financial adviser to Harris and Sullivan & Cromwell LLP served as principal legal counsel. On the other side, L3 hired Goldman Sachs as advisor and Simpson Thacher & Bartlett LLP as legal counsel.