Following the 2007-2008 subprime crisis and the consequent stringent regulation, big US banks (those that managed to survive) halted B-and-C-Paper lending by shutting down their relative departments. This is what occurred at Wells Fargo, the US-based financial services giant, where the subprime subsidiary was shut down in 2010, two years after the painful $2.5bn in write-offs and the $25bn bailout by the US Government to avoid bankruptcy.

But has the involvement of big banks in this sector really come to an end? The answer is no. According to the Wall Street Journal, it has just passed through “a back door”: nonbank financial firms. 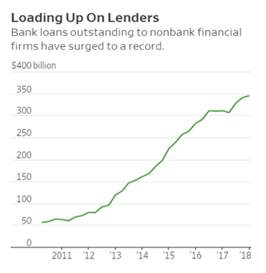 Source: Federal Deposit Insurance Corp.
An example is Exeter Finance LLP, a Texas-based nonbank lender specialized in auto loans. In the relevant assessment scale (the FICO score, ranging from 300 to 850) the average Exeter borrower scores 570: customers below 600 are considered subprime borrowers, too low to receive a loan from regular banks. Moreover, charged-off loans are 9% for Exeter, compared with a mere 1% for Wells Fargo. But where does Exeter get the money (more than $1.4 billion by now) to finance these risky loans? From the same big banks who refuse to give out subprimes directly: Citigroup and Wells Fargo are the main lenders, along with Barclays and Deutsche Bank.
Source: Federal Deposit Insurance Corp.
Recently, credit has been extended also to areas where it crumbled in the wake of the Great Recession: in particular, for the first time the majority of mortgage deals were backed by nonbank lenders. This means that risky borrowers have easier access to mortgages indirectly financed by the same banks which caused an economic disaster 10 years ago. LoanDepot Inc., one of the largest mortgage providers, said future business was promising because of the inadequacy of banks in satisfying consumer needs. Indeed, the $250 million line of credit from Bank of America is not bad either.

Nonbank lenders make a profit charging a higher rate than the one paid to the bank, which in turn funnels money through deposits. Since these cost almost nothing, the difference in the rates represents pure profit for the bank. Banks state that, thanks to a credit restructuring, this new lending process is safer than giving money directly to consumers and firms. This version is (obviously) backed by the nonbank financial firms: Jason Grubb, Exeter’s CEO, said his company has “consistently strong credit performance”, meaning that “the banks are well protected”.

Since it’s risky loans we’re talking about, where’s the catch? The hot potato, i.e. the defaulting loans, is passed on to the nonbanks, which must be well capitalized to absorb any possible loss. This makes the bank “safer”: since both firms are capitalized, depositors are pretty sure they will have their money available too.
​
A spontaneous question arises: how can intermediaries, which are smaller, less capitalized and entirely dependent on bank loans, guarantee more efficiency and less risk than the previous system, which has already caused an economic cataclysm 10 years ago?
​Andrea Gasco