“A champion, one of those born once every ten years in the world”: these are the words pronounced by Andrea Guerra, former CEO of Luxottica, to describe Leonardo Del Vecchio. Italian entrepreneur, Mr Del Vecchio founded Luxottica in 1961 and now he is considered one of richest men in Italy and in the world. At the moment, his company Luxottica is the biggest producer of frames for eyeglasses and sunglasses in the world and supplies frames for brands such as Ray-Ban, Vogue, Prada and Chanel. However, Del Vecchio has not limited his influence to the world of eyewear alone, but in the years he has woven a dense network of influences on the Italian finance scene.

The stake in Mediobanca
At the beginning of this year, Mr Del Vecchio received the approval from the ECB to increase his stake in Mediobanca just under 20 per cent. Through his financial company Delfin, the eyeglasses tycoon revised its stake from 11.92 per cent to 13.2 per cent, thanks to his recent investment of €80 million. The powerful homegrown investment bank has not had a single non-banking shareholder with a stake greater than 10 per cent since it was founded in 1946. Del Vecchio increased his shareholding with the aim of imposing his view on the future shape of the bank. Indeed, he expressed his discontent for an over-reliance on consumer lending activity and dependence on dividends from its 13 per cent stake in Italian insurer Generali. Apparently, Luxottica’s chief view on the future of Mediobanca has been embraced by Alberto Nagel, long-time CEO of the bank. Actually, Del Vecchio wants to shift the activity towards wealth management, confident to attract the great riches of the Italians, that are traditionally still very insecure on investing their money.
Recently, the Italian Banking Association published the numbers of the banking deposits in Italy. This year the banking liquid deposits almost reached the amount of €2tn, and this is impressive considering that every year Italian economy produces €1.6tn. So, heading towards the potential growth of the wealth management division of the bank could be a valid strategy and bring great profits for Mediobanca.

Holdings in Italian financials
The billionaire holdings in the Italian finance landscape are not limited to Mediobanca. Indeed, Mr Del Vecchio owns a roughly 5 per cent stake in Generali and a 2 per cent stake in UniCredit, which itself participates in the Italian investment bank. He has been the main influence in Mediobanca’s boardroom over its investment in insurer Generali and through this twist of stakeholdings Leonardo Del Vecchio has built a complex web that links Italy’s largest bank by assets, Italian biggest investment bank and the most powerful insurer. 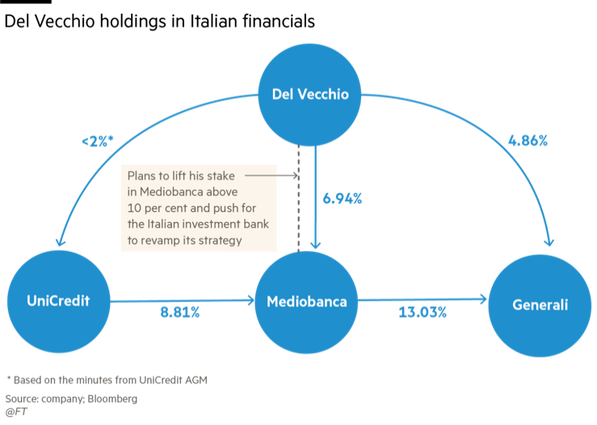 Del Vecchio has always been very influential on relevant corporate and strategy decisions and some recent important changes in the financial companies he backs have been taken with his consensus now and in the future.
The Italian businessman, a top-10 shareholder at UniCredit, had an influential voice among other investors in favor of Andrea Orcel as new CEO for its global banking experience. Moreover, as an influential voice in the shareholders meeting, he will make his voice heard against the possible political takeover of the majority state-owned lender Monte dei Paschi di Siena, a deal that is strongly opposed by shareholders. However, the designation of Italy’s former finance minister Pier Carlo Padoan as new chairman of the bank is a clear sign that UniCredit will play a fundamental role in the consolidation of the banking sector demanded by regulators and political institutions, still unknown whether it will be with MPS or with Banco BPM.
Another possible scenario could see UniCredit, led by the M&A experienced manager Orcel, as an acquirer of Mediobanca or Generali. In the first case, Del Vecchio will be the the first shareholder with a stake of 6 or 7 per cent, controlling in actual fact Generali too. Deutsche Bank has prepared recently a report with the details of a possible merger between the two banks, with UniCredit launching a takeover bid with a premium of 25 per cent (€11,4 per share). That implies a MBV multiple of 1,2, with 25 per cent of cash (€2,8 per share) and the remaining 75% in shares (1 UniCredit’s share for 1 Mediobanca’s share). DB analysts value the impact on Cet1 for UniCredit manageable (-20 bps, from 12,8 per cent to 12,6 per cent) and possible synergies for €604 millions.

The merger with Mediobanca would be the one that creates the greatest value of the three and give a great impact to the growth of the Corporate & Investment Banking division of UniCredit, but now is too early to say. One thing is certain, Leonardo Del Vecchio will play a crucial role in the future consolidation movements of the Italian financial scene and will move the wires of future financial entities.