Lyft IPO: Will the first ride-hailing company listing be a success?

On March 1, Lyft disclosed its S-1 filing, revealing its IPO plans and kicking off what is expected to be a memorable year for Silicon Valley listings, both in terms of value and number of IPOs.

The company is planning to start the roadshow on March 18 and is expected to debut on NASDAQ by the end of March under the stock symbol LYFT, becoming the first U.S. publicly traded ride-hailing company. Indeed, this move officially puts Lyft in a winning position in its IPO competition with Uber, which, as reported by Reuters, is still working on its listing plans.

In the IPO, Lyft will offer Class A common stocks with 1 voting right per share. The co-founders Logan Green and John Zimmer will hold 0.05% and will continue to exercise voting control thanks to supervoting shares. After the offer there will be 240,597,591 Class A (1 voting right per share) and Class B (20 voting right per share) shares outstanding, in addition to 6.8 million shares subjected to option exercise and 31.6 million restricted shares for employees. At the moment, Lyft’s main investors are Rakuten (13%), General Motors (7.8%), Fidelity (7.7%), Andreessen Horowitz (6.3%) and Alphabet (5.3%).
​
The San Francisco based company, Lyft, started a movement to revolutionize transportation in summer 2012, launching its peer-to-peer marketplace for on-demand ridesharing as a service of Zimride, a ride sharing company focused on longer trips founded by Logan Green and John Zimmer in 2007. Since then, Lyft revenues have been growing at an incredible pace - they tripled in 2017 and doubled in 2018 - reaching $2.1 billion. Still, the company seems to be struggling with profitability and is reporting huge losses as it grows.

Source: S-1 Filing (SEC)
However, this trend is not new in the business and the other ride-sharing companies around the world - such as Uber, Ola (India), Didi (China) and GrabTaxi (Malaysia) - are all experiencing the same profitability issue. Indeed, probably because of their business model based on independent contractor drivers (that are not employees) and on low capital intensity (ride sharing companies don't invest in cars), economies of scale are not doing their job properly.
​
On the other hand, growth has never been a real problem. A strong example is the US, where ride-sharing is becoming part of the daily routine, disrupting the taxicab business, which is continuing to lose market share, with the price of a taxi cab medallion in New York that has fallen by $1.3 million in 2013 to $160,000 in 2018. 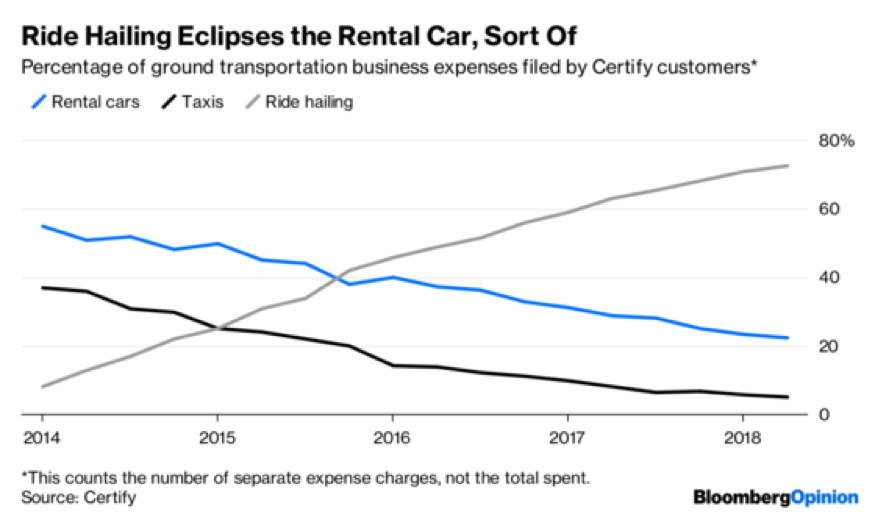 Source: BloombergOpinion
​In this fiercely competitive market, Lyft is trying to gain market shares with a focus strategy over the US market. Conversely to Uber’s business plan, which sees the company expanding all over the world and in all businesses related to logistics – from food delivery to ride-sharing -, Lyft is approaching the competitors by focusing only on US transportation services, and - up to date - it seems to have worked out well. Indeed, Lyft is gaining market shares over Uber, while the latter was forced to leave most of the Asian marketstolocal ride-sharing businesses (Didi and GrabTaxi) in return for shares of these companies. Besides, it is not kicking off in Europe, because of regulation. 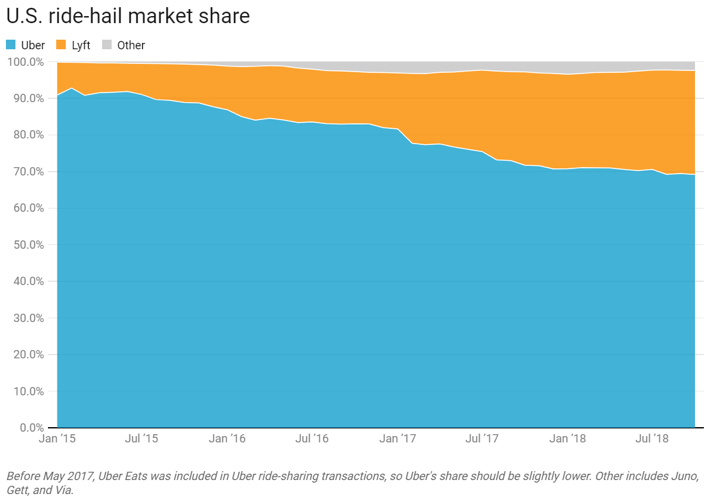 Source: Recode
Lyft, during its last funding round in June 2018, was valued $15.1bn. However, analysts expect the IPO valuation to reach figures between $20bn and $25bn, that would imply a forward revenue multiple of 7.5x with expected revenues of $3bn for 2019.

These numbers are based on a strong expected growth combined with an underestimation of the profit problem, some New Constructs analysts said. In fact, a near future of self-driving cars is the only scenario that could justify a +$20bn pricing: this would allow Lyft to increase per-ride revenues (from 24% - the rest goes to the driver - to 100%) by changing its operating expense structure (switching from variable to fixed costs) and to exploit better economies of scale as well as to build higher competitive barriers to entry. However, this “best case” scenario, according to New Constructs analysts, is unlikely to happen given that, currently, Lyft does not have neither any strategical advantages over Waymo, Uber or GM in developing autonomous vehicle nor more capital to invest in it.
​
Aswath Damodaran, valuation professor at NYU, found that a price tag of $20-$25bn is overvalued too. Indeed, his estimations led him to value Lyft less than $16bn, with still doubts about future profitability. 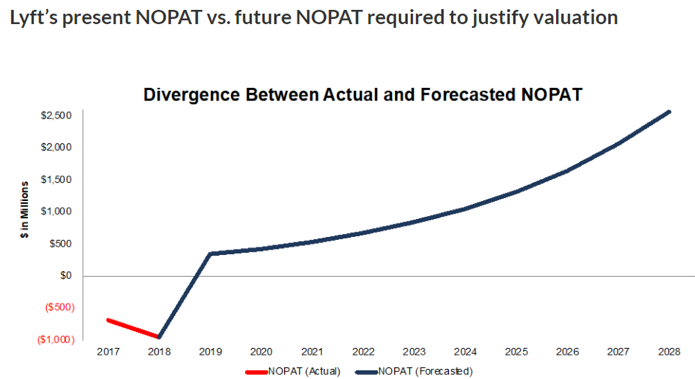 Source: Marketwatch
The aim of the offering, as Lyft wrote in the SEC filing, are “to increase our capitalization and financial flexibility, create a public market for our Class A common stock and enable access to the public equity markets for us and our stockholders”. Accordingly, they “intend to use the net proceeds from this offering for general corporate purposes, including working capital, operating expenses and capital expenditures”, but also to acquire or invest in businesses, services and technologies.

Finally, this IPO, led by JPMorgan Chase & Co. along with Credit Suisse Group AG and Jefferies Group LLC, will be closely observed by the rival Uber, whose future IPO valuation will be highly impacted by the success of Lyft offering.