Markets reaction to US presidential elections

On November 8th Donald Trump was elected President of the United States. This was quite a bit of a surprise since polls were forecasting a Clinton presidency for the country, therefore markets were not discounting this news.

Trump’s administration plans to increase government spending on infrastructure and cut taxes in order to give fiscal stimulus to the economy causing both expected higher inflation and an increase in US government debt, though it is unclear to which extent these promises will translate into policies. At the moment, there is an overall uncertainty since the new appointed President remains unpredictable.

As a Trump presidency was becoming more and more likely, the US dollar in the FOREX market appreciated steeply against the Mexican peso due to Mr. Trump’s anti-Mexico presidential campaign based on introducing tariffs on manufactured goods by US companies in Mexico and taxes on cash remittances to the southern neighbor country, the possible end of the North American Free Trade Agreement (NAFTA), in addition to the wall along the border on Mexico’s expenditure to limit illegal immigration. During the election night the Mexican peso plunged to a record low level of 20.78 pesos per dollar, with a 13% drop, the most significant since the Tequila Crisis in 1994/1995. 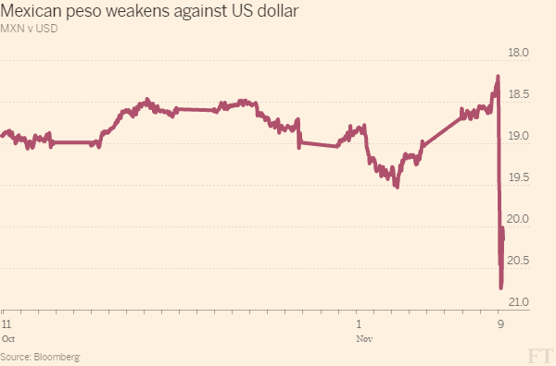 Other emerging market currencies depreciated against the greenback such as the Brazilian real by 6.86% and the Chinese yuan fell to 6.7918 from 6.7769 on Wednesday, touching the lowest level since August 2010 on the following day.

Whereas for the stock market, it experienced an “atypical” market reaction with a two day rally. The DJIA jumped 600 points increasing by 3.2% in the three days after the elections and it had the best weekly performance since December 2011. Also the S&P 500 index had its highest weekly gain since 2013 with a jump of 3.8%. These trends were mostly led by the positive performance of banks (12.1%), pharmaceuticals (8.5%), industrials (7.6%) and materials (5%).

Usually stock markets selloff the day after the elections because of general uncertainty, this time they did not. This positive reaction comes from the current political situation in the US, now the country has a Republican led Congress and President, the expected expansionary fiscal policy and loosen financial regulations for big banks and healthcare companies announced by the new President.
However, tech companies such as Apple, Amazon, Facebook and Google plummeted last week after the elections results, this is mainly because of the possible negative effects of Trump’s looming anti-immigration plans which would reduce valuable human talent access for Internet companies. Twitter was the only exception with a 4% jump because of the new elected president sympathy for this social network. 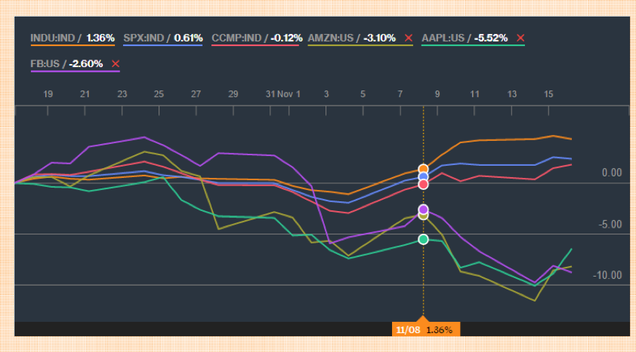 Also the bond market is experiencing a “reverse” trend, after more than 30 years of bull market, investors are reallocating their portfolios selling bonds and favoring stocks because of expectations of higher government spending which will lead to an increase in the government budget deficit and inflationary effects. This is causing bond prices to drop and yields to rise. The 30-year Treasury bond yield on Monday overpassed the psychological 3% level. The 10-year Treasury has surged from a yield of 1.80% to 2.30%. This has several consequences for the economy. On the one hand, it restrains the economic system because mortgages and other financing, that are mostly based on the 10-year benchmark, will be more expensive for borrowers (on Wednesday 16th, weekly mortgage applications dropped by 9.2%) and the US government will have a higher cost of borrowing. On the other hand, this rise in interest rates will benefit financial institutions and savers.

Moreover, as a consequence of expected higher inflation, investors protected themselves spending $1 billion into TIPS (Treasury inflation-protected securities) in the election week, being the second biggest inflow after the record of October 2002.

One last thing that is worth to underline is the latest upward trend in the CDS market on US debt. Protection against US public debt default has become more expensive even if it is still in the ranges of those of solvent rich countries such as Germany and Japan. The price to insure 10$ million for a period of five years is now $28,900 annually up from $22,400 on Tuesday before Trump being elected President, the highest in 2 years. Anyways, this has to be seen as an indicator of “market stress” among all the previous illustrated euphoria. In fact following the election S&P rating agency affirmed its AA+ rating for the US.