In January 2019, the South Africa’s Competition Tribunal reported that it has prohibited a proposed merger between private hospital groups Mediclinic Southern Africa and Matlosana Medical Health Services (MMHS), scuppering the former’s plans to expand in the country’s North West province.

South Africa is mainly dominated by the presence of government run hospitals and clinics in fact the government holds the majority stake in lots of hospital and clinics while the rest remains private. In 2004, a ruling by the South Africa’s Competition Tribunal in the country has changed the entire structure of the healthcare market preventing collective pricing done by various organizations. Consequently, a number of mergers and acquisitions within the market has been made which has lead the private hospital market to concentrate.

The chart below gives an overview of the Mediclinic’s market positioning and the entire private hospital market, showing that the country is dominated by three major players, which are Netcare Limited, The life Healthcare Group Limited and Mediclinic Southern Africa. 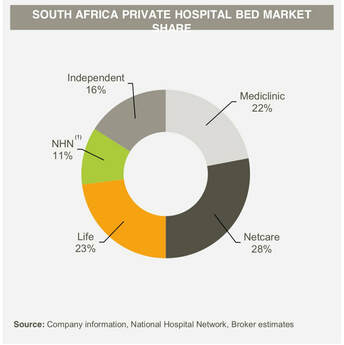 In June 2017, the Competition Commission, after investigating on the situation about medical services   in South Africa, recommended to the Tribunal that the proposed merger should be prohibited on grounds that it could lead into a kind of monopoly in the sense that the joining together of Mediclinic Potchefstroom, Wilmed Park and Sunningdale hospitals would likely result in a significant increase in healthcare prices in the region, less choice due to reduced competitiveness in the sector, conferring to Mediclinic relatively greater bargaining power in terms of medical schemes and infrastructures.

Lastly, the Commission stated that, after the merger, other structural factors would have been changed such as non-price factors, as patient experience and quality healthcare, which would likely diminish, depending on the main player in the market.
The two companies, Mediclinic and MMHS denied that the proposed merger would have transformed the market in a kind of monopoly, producing negative effects on competition and they argued the opposite, sustaining that it would lead to a number of positive efficiencies in terms of competition. These efficiencies could include improved costs of procurement, increased clinical quality and patient experience at the target hospitals.

Finally, the South Africa’s Competition Tribunal declared, in favor of the prohibition of the potential merger, that, after careful consideration also with a number of medical aids, no appropriate remedy was tendered that would cure the substantial lessening of competition that would arise as a result of the proposed transaction.