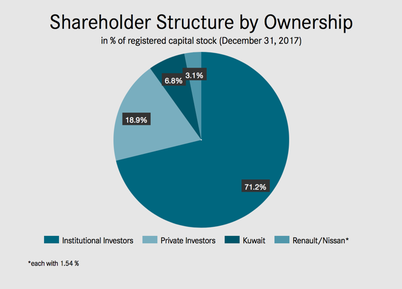 Li Shu Fu, the billionaire founder of Zhejiang Geely Holding Group Co. has acquired a 9.69 percent of Daimler AG for about $9 billion (€7.3 billion). The Chinese holding, following a positive trend of acquisitions (Volvo AB, Lotus Cars Ltd), has bought more than 103 million shares using a combination of debt, equity and financial instruments overseas, all funds raised outside China.
This investment, which is the largest in a global automotive manufacturer by a Chinese company, has allowed Li to become the largest single shareholder of Daimler AG.

​As the chart shows, the Chinese stake in the German society (9.69%) is higher than the Kuwait’s sovereign wealth fund one, which amounts to 6.8 percent, as of the end of December 2017. For the Stuttgart-based carmaker, this represents a vote of confidence. The two companies are ready to share the new battery technology in order to meet tough Chinese emission rules and gain market share in the electric car field.

It can be useful to further analyse the identity of the two players.
Daimler AG is a multinational automotive corporation based in Stuttgart, Germany.  The company has more than 289,000 employees worldwide and over $200 billion revenues in 2017. It is one of the world’s largest producers of luxury cars and manufacturer of commercial vehicles, it offers a wide variety of vehicles under numerous brands around the world and operates in the financial services segment as well. The company has a market cap of $92.68 billion, as of February 2018.

On the other hand, Geely Holding Group (Zhejiang Geely Holding Group Co. Ltd) is a Chinese multinational automotive manufacturing company based in Hangzhou, Zhejiang. The entire holding consists of several brands, such as Lynk & Co., Volvo Cars and Lotus.
The company workforce is made of over 80,000 employees and its biggest portion is employed at Geely Auto, pursuing the objective of making the company one of the top 10 world-leading automotive groups by “creating safe, environmentally-friendly and energy efficient automobiles.”

From Li’s standpoint, this deal represents the starting point of a long-term commitment which aims at improving and speeding up integration in the electric cars market.
The Chairman said: “I am particularly pleased to accompany Daimler on its way to becoming the world’s leading electro-mobility provider. In order to succeed and seize the technology highland, one has to have friends, partners, and alliances and adapt a new way of thinking in terms of sharing and united strength. My investment in Daimler reflects this strategic vision.”
However, the German firm has just announced its ambitious plan to release 10 different fully electric vehicles by 2022 and to invest more than $8 billion into the technology.