Earlier this week, private equity-backed firm Metropolis Healthcare, one of the leading diagnostics companies in India, has received markets regulator SEBI's approval to launch an initial public offering. The company had filed an offer document with the SEBI on 28 September 2018 proposing an IPO with subsequent listing on BSE and NSE. The SEBI's observations are necessary for any company to launch public issues such as IPO or a rights issue.

The sale will mainly include already existing shares. The IPO will entail the sale of up to 5,017,868 shares by the promoters, i.e. the Shah family, and up to 10,251,816 shares by Carlyle Group, through investment arm CA Lotus Investments. “It is largely a secondary sale. My family will dilute some stake as well to retire some of the debt at the holding company level,” said Ameera Shah, CEO.

Metropolis Healthcare was initially set up by Sushil Shah, Ameera Shah’s father, in 1981 as a single-laboratory clinic. Today, the company has 251 patient centres, 1,130 touch points and 879 third-party patient service centres. The company offers a comprehensive range of clinical laboratory tests and profiles, which are used for prediction, early detection, diagnostic screening, confirmation and/or monitoring of the disease.  The diagnostic chain focuses on west and south India, where it will seek to deepen its presence by setting up more centres. It also plans to enter unexplored markets in Africa, as mentioned by the CEO Ameera Shah.
​
The private equity-backed firm has achieved strong growth in recent years, providing investors with an opportunity to cash-in on their investments. The company’s revenue from operations reached Rs.643 crore in 2018, from Rs.475 crore in 2016, growing at a CAGR of 16.3%, while its EBITDA reached Rs.177 crore, having grown at 16.9% from Rs.130 crore in 2016. On the bottom-line, net income benefitted from an annual growth of 15.7% from Rs.82 in 2016 crore to Rs.110 crore. The company is now one of the main players in the diagnostics industry in India, being a leader in the regions of West and South India. 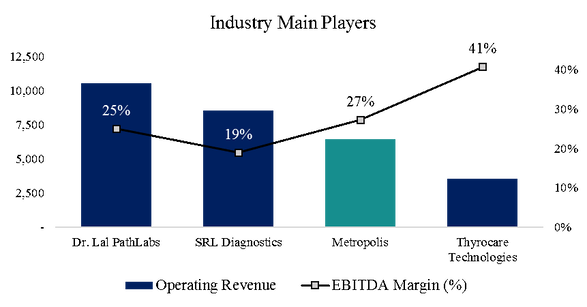 The proceeds from the IPO will not play a key role in Metropolis’ development, as the offering will mostly include already existing shares. Rather, the focus of the IPO will be on 2 key points. Firstly, the company expects that the listing of the shares will enhance its visibility and brand image. Secondly, the offering will provide liquidity to existing shareholders, mainly to the private equity fund Carlyle, but also to the promoters, who seek a minor dilution in their ownership.

Meanwhile, Metropolis will be funding its expansion through mostly internal accruals. “We have mostly been growing through internal accruals. If you see, in the past also, most of the PE investments have happened through secondary deals. The primary component has been very small,” said Shah, adding the firm will also be looking at growing inorganically in the domestic and international markets. Listing of Metropolis’s shares will also allow to reach a third objective, which is to provide a “stock currency” that can be used to fund future acquisitions, the CEO said.

Carlyle, which holds around 31% stake in the firm, will be looking to pare its stake to 10% through the listing. Shah family, currently holds around 67% stake in the company, will reduce its ownership by around 10% through the IPO. Ahead of the IPO, the promoters have agreed to buy back shares from Carlyle Group representing close to a 2% stake for a consideration of ₹53 crore. After the listing, Shah or a person nominated by her has the option to buy back shares up to 8.75% of the equity held by the private equity fund according to a pre-determined formula. The offer also includes a reservation of up to 300,000 shares for subscription by Eligible Employees.

New Developments and What to Look For

The date of the offering is not yet known, nor is the company in a rush. CEO Ameera Shah said earlier this week that the company will wait for the right time for an IPO. “We always have to time it (the IPO). Markets are not in the best of condition and are very volatile. We will wait and see. We are not in any hurry right now. There is no window in December,” said the executive.

Following these developments, new risks to the IPO may emerge from the financial investor’s side. On 30 November 2018, Carlyle was reported to be planning to sell its stake in Metropolis Healthcare ahead of the IPO, and the latter was said to be in talks with investors in order to raise money to buy back the stake. These declarations were made anonymously. The motive behind this pre-emptive move was said to be the uncertainty around the timing of the IPO, but only time will tell how the transaction plays out.