Microsoft acquisition of Activision Blizzard: the massive deal that is going to upset the gaming industry

On January 18th, Microsoft announced the acquisition of Activision Blizzard in a massive and historical deal of $68.7bn, creating the third largest gaming company by revenue, only behind Tencent and Sony. The all-cash transaction will boost Microsoft growth in the gaming business across all platforms, including mobile, console, PC and cloud, and would lay the foundation for innovation in the metaverse. The deal is expected to close in 2023 after regulatory review and closing conditions.

The gaming industry: what is fueling the growth?

The video games industry was estimated to be worth $198 billion in 2021, with a 14% increase from 2020. These numbers represent a visible difference compared to forecasts made in 2016, which instead had predicted a total value of $90 billion for the same period. This shows how much the industry is growing and anticipates further acceleration in the coming years. Currently, the video games industry is projected to reach an estimated value of around $340 billion by 2027 with Asia leading the path in terms of volume of players, accounting for 1.48 billion out of a total of 3 billion players worldwide.

The main companies active in the sector are indeed Tencent, Sony and Microsoft. The Chinese giant is the leader in the industry, followed by the Japanese one, while the American one comes in third place. These three countries represent the main geographies in which gaming is growing the most. A large share is then held by tech companies such as Apple Inc., Google, and Activision Blizzard. The acquisition of the latter by Microsoft could furtherly enforce its position as a market leader and would allow the company to compete in a more effective way with foreign companies. 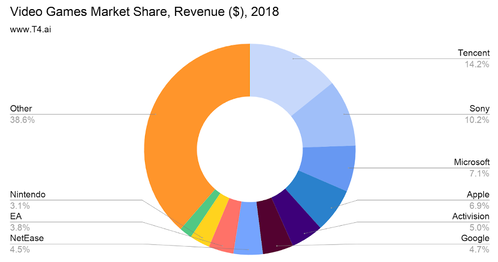 ​Technological improvement has been a pivotal point for the development of the gaming industry. Particularly important areas of concern are virtual reality and augmented reality that are disrupting the technology sector. The Metaverse is projected to play a key role in the implementation of gaming-derived technologies, hence justifying the massive growth that the gaming industry is experiencing in the last few years.

Rationale of the deal

Microsoft, one of the largest technology companies in the world, was founded in 1975 and has the second highest market cap in the world ($2.35 trillion as of 30/03/2022). It produces goods and services in a variety of fields, including computer software, personal computers, and gaming consoles. In the past twelve months, Microsoft registered $184.9bn in revenues.

Activision, the target company, is an American video game publishing company that rivals Sony and Tencent. They have developed and own some of the most popular games worldwide, including the Call of Duty and Star Wars franchises. These games have become popular within the Esports community, and Activision has expanded out to own various Esport initiatives. Being founded in 2008, Activision is a young company which is growing extremely fast.

"Gaming is the most dynamic and exciting category of entertainment across all platforms today and will play a key role in the development of the metaverse's platforms," claimed Satya Nadella, president and CEO of Microsoft. Following the acquisition, Microsoft will include iconic franchises such as 'Warcraft', 'Diablo', 'Overwatch', 'Call of Duty' and 'Candy Crush', as well as global eSports activities through Major League Gaming.

There are a few reasons why Microsoft acquired Activision, and could possibly explain a shift in the way that the American tech company wants to generate revenues in the future.

Following the boom that subscriptions have had in recent years, Microsoft has thought of the enormous potential that a subscription service for games could have. Indeed, thanks to the introduction of Game Pass  (a platform offering access to a wide range of games for use on PC and Xbox), Microsoft has had access to a pool of over 25 million users who pay a monthly subscription of around 15$ offering access to over 300 games. Thanks to the acquisition of ZeniMax Media for $7.5 billion last year, Microsoft was able to acquire 8 gaming studios. Moreover, considering the latest acquisition, it will add other 9 too. This can be considered as a key factor in its new strategy that would allow users to have access to more games, creating value for two main reasons. Firstly, it would contribute to the war between consoles, which would allow Xbox to gain ground on its main competitor, Playstation. The second reason is that it would provide access to games directly from its own subscription service. By doing so, the average user would prefer to pay for a subscription rather than buying games individually, thus increasing total revenue and market share.

Moreover, gaming is becoming an increasingly important cog in Microsoft’s balance sheet, with revenue growth of 33% in the gaming division outpacing the overall company revenue growth by 15%. Most of the company’s gaming division profits come from sales of its Xbox console series and tends to rely on third party publishers for blockbuster franchises to draw attraction to its console line. By acquiring Activision, Microsoft has integrated a serial blockbuster game-producing company that is one of the kings of console, computer, and mobile gaming. Essentially, this acquisition gives Microsoft a ‘cheat-code’ to ramping up its gaming content credentials, along with increased access to important intellectual gaming property. For example, Microsoft will be able to market exclusive games alongside their gaming console line and hold certain licensing rights, making it increasingly attractive over its main competitors.

As previously said, the acquisition could increase subscriptions for Microsoft’s Game Pass, which allows players to game cross-platform, along with its cloud gaming service. As we see increased integration of consoles and platforms (for example, Fifa 23 will be the first Fifa to allow cross-platform gaming), subscriptions and cloud-based gaming services are seen as some of the main revenue generators for gaming companies. Microsoft’s ability to bolster subscription numbers through this acquisition could propel future growth in the division. With Activision Blizzard's nearly 400 million monthly active players in 190 countries, this acquisition will allow Game Pass to position itself in the market with a greater presence.

Finally, Microsoft’s acquisition of Activision solves a gripe that investors have had with its balance sheet: too much idle cash. This occurred because of record sales during the pandemic and the all-cash acquisition means that Microsoft has been able to use up around 50% of its $137.7bn cash reserves.

The tech and gaming industry was shaken by the announcement of the acquisition of Activision Blizzard made by Microsoft. In an all-cash-deal, Microsoft will pay $95 per share, with a substantial 45.28% premium over its last traded price before the announcement, $65.39 per share. The offer price is still below the all-time-high registered in February 2021 of $104. Activision Blizzard was valued at $68.7bn, as the purchase price, equal to $75bn, includes $6.37bn of Activision’s net cash. Microsoft will be able to fully fund the deal without taking additional debt due to its strong cash position, with more than $130bn in cash at the end of 2021. The acquisition will be accretive, adding about $0.26 earnings per share to current Microsoft’s $8.05 EPS.

The transaction, approved by the Board of Directors of both companies, is expected to be closed between July 2022 and June 2023, after the regulatory review. Even if it is very unusual for deals like this to be axed due to an injunction arising from Antitrust Laws, Microsoft would have to pay a termination fee ranging between $2 and $3 billion in that case.

This acquisition represents the largest gaming deal ever by far, making Microsoft the third-biggest gaming company in terms of revenues, behind Sony and Tencent.

If we look at recent comparable transactions in the gaming industry, we can notice very high multiples, with an average EV/EBITDA equal to 20.1x (median 21.0). The Microsoft-Activision deal presents a below-average EV/EBITDA multiple (18.19x). 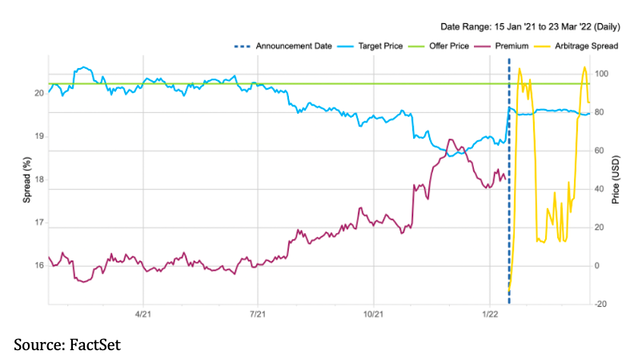 But the impact of this huge deal extended throughout the gaming industry. Sony plummeted by 13% due to investors’ concerns about the increasing competition that Sony’s Playstation will face against Microsoft’s XBOX. Also Tencent declined by 2,75%. Instead, the second largest American company of the video game industry, Electronic Arts, saw its stock price going up by almost 8% because of the increasing probability that it could also be a potential target. The same thing happened to Roblox Corporation and Unity Software.