Middle East and Oil: why so correlated?

The importance of oil is given by the fact that it is vital to many industries and is of importance to the maintenance of industrialized civilization itself. Thus is a critical concern to many nations.
“The petroleum industry is involved in the global processes of exploration, extraction, refining, transporting and marketing petroleum products. The largest volume products of the industry are fuel oil and gasoline. Oil accounts for a large percentage of the world's energy consumption, ranging from a low of 32 percent for Europe and Asia, up to a high of 53 percent for the Middle East, South and Central America (44%), Africa (41%), and North America (40%). The world at large consumes 30 billion barrels (4.8 km³) of oil per year, and the top oil consumers largely consist of developed nations”.
We are going to focus on the Middle East because it is the largest area of production and export of petroleum. In particular, Saudi Arabia is the second largest producer (after Russia) and the biggest exporter of the world.
​

Even where the non-oil parts of the economy have grown in recent years, Middle East countries’ dependence on oil remains strong.
This is why US President, Donald Trump, in order to damage Iranian economy, imposed a sanction hitting Iran’s oil exports next month. Hence, the Islamic Republic will look for alternative revenues to provide an 80m population with medicine and other vital commodities. However, Iran is also keen to make sure the president of the country they call the “Great Satan” fails in his goal to shut down Iran’s main economic lifeline.
Iran, which derives a large part of its foreign currencies and state revenues from oil exports, is seeking to create ways to sell its oil ahead of the reimposition of US sanctions on November 4 and European governments will foster companies to help Iran to sell crude.
In the past Iran has been able to drag itself out of a deep recession thanks to its ability to more than double its oil exports following the Vienna agreement.
Experts outside Iran believe US sanctions has already deterred foreign oil companies such as Total from doing business with Iran. Now both analysts and investors expect Iran export to be above 1m barrels per day, that is much lower than the peak of 2.8 reached this year. Iran today is largely dependent upon China, which is in trade war with the US, and which is still importing Iranian oil, while another big customer, South Korea, suspended it. Iranian politicians and investors hopes are also based on the fact that they believe that Saudi Arabia will not be able to balance out the missing oil supply from Iran.
The kingdom (Saudi Arabia) is the world’s largest oil exporter and a key US ally.
However, Donald Trump warned that Saudi Arabia would face “severe punishment” if the government was found to have killed Mr Khashoggi.
Turkish officials have said they believe the journalist, who is a US resident, was killed inside the Arabian consulate, while Saudi Arabia has denied having any role in his disappearance.
<<The Saudis have historically tried to keep politics and economics separate>> said Gary Ross, head of Black Gold LLC., <<but right now they are trying to remind the world of their strength. Will they take direct action that impacts the oil market? It’s unclear>>.
However, until now Saudi Arabia has raised the quantity of oil produced to 10.7m barrels per day (which is the highest value ever reached) mostly in order to offset the reduction in Iran output as a consequence of the US sanctions.
Killed by them or not, Saudi Arabia’s plan to reduce its dependence on oil will have to wait because these recent controversies frighten international investors about investments in the kingdom.
Any worries about the tone of Saudi Arabia’s response to tough, and warranted, criticism of the regime are understandable. Saudi Arabia, along with Russia, provides the lion’s share of the world’s oil and this year the two countries will meet nearly a quarter of global demand.
Saudi Arabia is therefore more tied to petroleum’s future than ever. Forget plans for infrastructure, tourism and other promised transformations. All that future investors in that country will see for now is the dirty oil underneath the sand.
Due to these reasons, crude prices slumped by the most in over three months.
Brent, the international marker, fell 5 per cent to $75.88 a barrel and West Texas Intermediate also dropped 5 per cent to $65.74 a barrel. 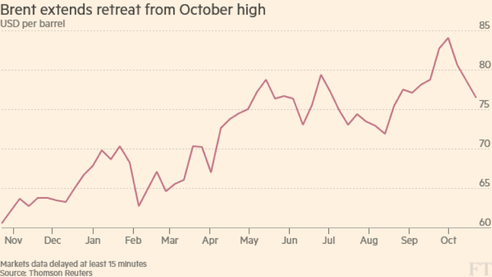 In the end, what do we have to expect from oil market? It is really unpredictable and we can only wait.