Midterms are over. What's next?
​

As Benjamin Graham, celebrated investor and mentor of Warren Buffet, used to say, "the market is a voting machine in the short term and a weiging machine in the long term". In the aftermath of the midterm elections, the market voted to reward stocks, with a rally bringing the S&P500 and Dow Jones well above a 2% gain in the trading day immediately following the elections, and as of today both indexes are finally up more than 3% on a yearly basis.

The outcome, which sees Democrats in control of the House and Republicans firmly holding the Senate was widely expected among pollsters and guarantees gridlock as the status quo in Washington for a couple of years at least.
​
Taking a look at past data, we can easily notice how historically markets have favoured such a situation of split government, with Both Republican and Democratic presidents having had the greatest effects on the stock market when Congress was split and gridlock prevailed according to Bank of America Merrill Lynch data. Such a leadership makeup though being evidently beneficial for stock returns has been rare, occurring for only a combined 11 years in the past 90, so given the low statistical significance of these observations investors are curious to see if the trend holds true. 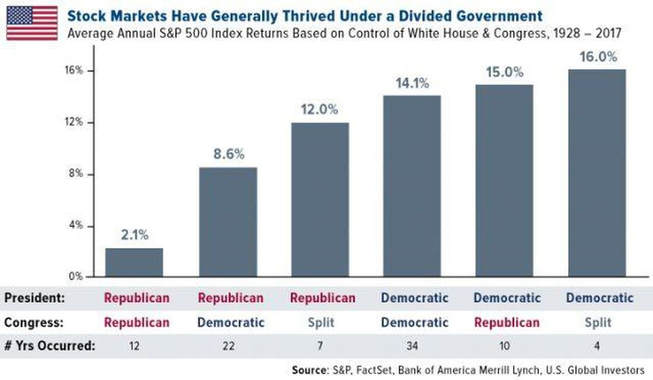 But now, having gone through this historical regression, focusing on the current state of us stock markets, what are the most meaningful and potentially impactful issue and how can they unfold following such a political outcome?
​
As many analysts both from the financial and political world suggest much will be decided by the degree of either cooperation of hostility the two parties will show. In particular, a great deal of uncertainty and therefore heightened volatility, might be spread if democrats, once in January take actual control of the house, start launching a series of investigations against the cabinet targeting President Trump personally, which seems possible given the relevance of such a theme in the recent midterm campaign. On the other hand, in principle there would be no lack of common ground, being infrastructure spending as well as lowering prescription drug cost two of the pivotal points in both parties electoral campaign.

Recently the American Society of Civil Engineers (ASCE) while reviewing the country’s roads, bridges and waterways noted that there’s a $2 trillion infrastructure funding gap between now and 2025 and Public spending on infrastructure as a share of GDP is near all-time lows (2.3%). Considering that under a Democratic congress we are unlikely to see on the fiscal side any expansion of the current tax cuts, as Sean Darby (Global Head of Equity Strategy at Jefferies) notes, this is a logical time to address the many US infrastructure deficiencies that have become an impediment to a variety of economic activities.

Therefore it’s possible we could finally see a spending bill of some kind, this would be a massive tailwind for commodities, energy and especially constructions services and raw materials stocks including Vulcan Materials, Martin Marietta Materials, Quanta Services and AECOM, which since the start of the year, despite jumping in response to the election outcome have severely underperformed the S&P 500 or are even down for the year.

Source: author's elaboration
Furthermore, as we had already mentioned in the previous article written in anticipation of the elections, trade policy certainly is a pivotal element of the post-midterm environment, most evidently as it remains the main instrument directly in the hands of the White House incumbent. Doubtlessly trade policy and the spectre of a looming and intensifying trade war with China has been the main driver in equity and currency markets once the bullish effect of the Fed’s chairman Powell has been accounted for.

The rally in prices of this Monday lifting the S&P up more than 1%, followed on Tuesday by of the sharpest falls in the last five years, with S&P down more than 3% clearly shows how important the market perceives the prospect and rumours surrounding further trade talks with China. Uncertainty is extremely high and is evidently reflected in the sudden spike in volatility we have observed across world equity markets in the last days. The main reason of such uncertainty is that even though President Trump and President Xi met at the G-20, the two leaders did not issue a joint statement, leaving investors wondering whether further tariffs escalation will be actually avoided, which had already started to affect both sides. The sectors most strongly impacted on the US side being agricultural, automotive (which are consequently the ones showing the highest gains in Monday’s rally, with the DJUSMI up by nearly 2%) and technology, but the threat of disruption to long-stretching production chains could extend such an impact to virtually all sectors.
​
Trade talks do not only impact equity markets, indeed is easy to notice a strong correlation among the positive expectations in terms of US trade openness and a depreciation in the dollar. Most evidently this Monday as optimism on US China trade permeated financial markets worldwide, the dollar fell sharply against virtually every currency. A similar fall was observed when President Trump struck the new free trade agreement with Mexico and Canada, in both such situations we can easily deduce how investors expect a more sustained trade deficit than the precedent (more protectionist and retaliatory) presidential remarks had brought markets to price in. Considering the impact of such policies on the currency markets becomes especially important for understanding the recent underperformance of emerging markets, where the weight on emerging economies of dollar-denominated debt coupled with depreciating local currencies has become evident.