What is MiFid II about?
MIFID II is the revision and broadening in scope of the legislative framework announced by the European Securities and Markets Authority, to give directives to regulate the European Financial Market and safeguard the interests of end investors. Interactions between the countries of the European Union and third countries are aligned standardizing the practices addressed to financial professionals, and including a wider variety of complex products, with the main aim of rebuilding confidence in the sector following the 2008 crisis.

In this regard, the executive branch of the European Commission sought to increase transparency and target the reduction in the use of dark pools, OTC, algorithmic and high frequency trading by imposing more reporting requirements and testing. In addition criptovalues, self-placement in derivatives and relatives financial instruments are also part of the new legislation, differently from the original version. However, from a brokerage standpoint, the critical breakthrough lies in requiring a clearer division in the income statement between the payment for trading & sales and research, bounded at the core of the corporate services delivered as a unique bundle in terms of their relative price endowment from financial advisors.

In this article we will walk not only through the benefits brought on the table by the increasing demand for transparency but also through the knock-on impacts that cause uncertainty in the field of market research, and the associated investment ecosystem, in particular asset managers, retail investors and companies with smaller capitalization in the market.

Positive effects : end investors as beneficial owner
A first achievement reported is the limitation in the trading volume of stocks in a dark pool to 8% over the last 12 months.

For what concerns buy-side investors (hedge funds mainly), they were often considered victims of covering in the overall fees for broker research from which every intermediate party effectively benefitted: the rationale behind the application of pre-trade rules, improvements in reporting and price transparency allows for the rightful saving on this expenditure.

Strengthening competition may lead the supply-side, on its behalf, to exploit the perceived higher quality of analysis delivered from the remaining efficient firms. It sounds positive for the already established giants in the asset management framework, that are expected to capture even a larger portion of demand. Furthermore, the eventual cost of full compliance will economize the business practices, driving more large-scale merger and acquisition activity than previously observed under MiFid I.

Negative effect: liquidity constraints, a menace to growth
The ideal plot foresees a standardization of procedures across Europe, to create Alpha (active return on investments). However, it does not take into account the divergence of European market structures from the London hub. Indeed, banks in many of those countries are dominant players in a differently distributed fashion of businesses, and it’s improbable that they would effectively keep pace in the short run with the regulation, tailor-made for financial adviser-focused UK model.

On the same page, the wealth of the European economy relies upon an array of small, mid-sized companies which request an easy access to the Capital Markets’ infrastructures easing equity and debt, in order to generate a favorable ecosystem to finance their ongoing growth. Warning is the liquidity in the bond market, since fees reduction slashed the revenue from sales and trading, weakening the rank of the former in the global scenario.

Noteworthy is the concern for the increasing concentration of US competitors in the European Investment Banking market shares, at the expense of local competitors. The latter is evidence of response to the already shrinking research coverage and cut in the rank of analysts, as reported in the graph: the fewer left are primarily focused on high quality research, only affordable by the larger corporations. According to a survey by the CFA institute, around 60% of asset managers were already less willing to spend in research before MiFid was launched, and the trend is unequivocally enhanced now. 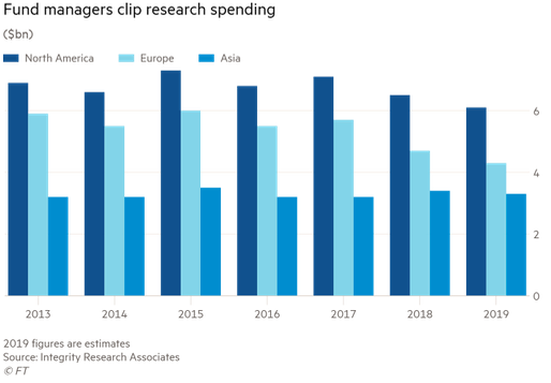 The intensity of rivalry is further relaxed given that Global banks and large listed companies enjoy an high HHI index, a larger and more profitable domestic market and a consistent price discipline. A huge competitive advantage over their European counterpart.

Detrimental is the impact on financial advisors, involved in figuring out ways to pay for brokers’ works out of dealing commissions. The outcome yet witnessed is the opposite than what expected: smaller investors are reacting negatively to the disentanglement of the bundle, internalizing lots of the corporate assets functions taken over by intermediaries, as final prices result unclear on the overall service provided - given that no imposition on direct contact between issuer and buyer is reclaimed in the new legislation- hence squeezing banks’ profits.

Summing up: communication is key
According to the pieces of evidence, asset managers claim how communication is misleading when lacking. it Is therefore crucial to promote ongoing open conversations on the matter in the early stage of policy making between involved institutions and regulators, in order to ensure a smoother transition to the new scenario, together with a more efficient course of action in facing daily challenges.

It’s also essential to bear in mind that research is not only a mean to an end, rather an ultimate common target.
Tipping the scale towards transparency should be done weighing the relative sustainability specific to each asset class in the long run, meeting the requirements, but bewaring of the liquidity constraint. The Capital Market Union may sound an optimal solution but will no efficiently encourage locals to invest in small- caps if government regulatory intervention in incentivizing them it’s not yet working properly in the first place.

Given the currently limited empirical evidence, only time, and continuous revision, will determine whether under MiFid II benefits will exceed costs, and affirm whether the market dismantlement is a price worth paying for transparency.