Monte Carlo of the East

When European and American citizens think of the gambling industry as a whole, they usually imagine luxurious resorts that could be found in Las Vegas. Actually, there is a place on heart where revenues that casino’s operators are able to generate are more than seven times the one generated in the “Sin City”, surpassed in terms of yearly gambling revenue in 2006: this place is called Macau.

Former colony of the Portuguese empire and near neighbor of Hong Kong, Macau occupies a couple of small island and a peninsula in China's southern coast and is defined as a SAR: a Special Administrative Region of China itself, maintaining separate governing and economic systems. With a population of more than 20.000 habitants per  we refer to this region as the most densely populated in the world. From an economic point of view, Macau obtains the majority of its GDP from tourism. What is usually referred to as the “Monte Carlo of the East” has in fact been able to capitalize on its long history as a gambling center, attracting each year millions of visitors, in particular from China and Hong Kong, where this ludicrous activity is illegal. Analyst estimated that around 2.2 billion people live within five hours’ flying time of the city. Unfortunately, we are currently living in 2020, in the middle of what is a global pandemic. Hence, a business model like the one Macau is based on, could be facing quite some issues nowadays. Let’s consequently try to understand what the future looks likes for this pearl of the East, starting with a bit of history behind this peculiar country.

Starting from 1962, the gaming industry in Macau had been managed in the form of a monopoly by Sociedade de Turismo e Diversões de Macau (STDM): a syndicate between some of the most influential businessmen from both HK and Macau, guided by the tycoon Stanley Ho's. This period was quite relevant for the development: of the country, its economy and this particular business which went through a quite drastic modernization process. Despite that, after decades of closed competition, when in 2002 the STDM’s license expired, the Macanese government opened the market to other players. New concessions were granted, and international investments started to flow in this huge marketplace. Going into details, six holdings had the opportunity to obtain a share of the overall market: Sands China, MGM China Holdings, SJM Holdings, Wynn Macau, Galaxy Entertainment Group, and Melco Crown Entertainment: all listed in The Stock Exchange of Hong Kong Limited, or in the Nasdaq or NYSE. The result of this liberalization can be identified in a double-digit annual economic growth rate between 2002 and 2014 with a GDP per capita increase of 526% (reaching $89,333 from $14,258) over the same 12-years period. It goes without saying, that also gambling as a share of GDP continued to rise, peaking in 2013 at more than 60% per cent, stabilizing later at around 50%.
​
The overall positive trend continued until 2015, when the growth rate contracted by 20.3%, compared to the previous year. The main reasons that could held accountable for this, is the campaign against corruption in mainland China, which has deterred Chinese officials and executives from gambling in Macau. In fact, with an average minimum bet at non-VIP tables around $250, we could consider Macau far beyond the reach of casual gamblers. Only after years of investments and restructuring of the overall business model, gaming revenues and the highly correlated GDP started to grow again. Casino’s operators in fact, started to put more emphasis on mass-market gaming consumers, while developing also non-gaming elements. In other words, they started to focus into different source markets such as middle class and families, offering guests a complete resort experience. 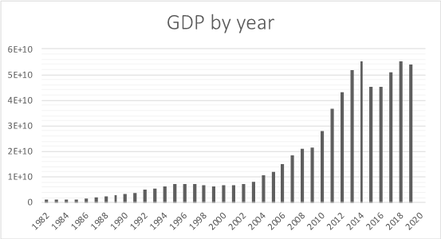 In 2018 revenues returned to the previous level (2014) and a lesson had been learnt: Macau lacked of variety in its industrial composition and needed to boost different businesses. As just pointed out, plans to diversify the city and make it more versatile in terms of being an international tourist destination had already begun but obviously couldn’t be fully concluded before the coronavirus pandemic. In fact, at the beginning of 2020, Covid-19 marked what represent the biggest break with the previous positive trend. Based on the IMF forecasts from 14th April 2020, GDP growth was expected to fall to -29.6% in 2020, while reaching the 2015 level, and pick up to 32% in 2021, subject to the post-pandemic global economic recovery. Actually, as of today, Macau’s real GDP contracted an unprecedented 48.7% and 67.8% over q1 and q2 this year, mainly driven by the fall of gross gaming revenue by 60% and 95.5% in the same periods. The city’s tourism sector has, in fact, held still for over half the year now, with both government substantial tax reserves and spending used to alleviate the economic shock through business subsidy programs. Market intervention from the government took place to incentivize job retention and sustain the self-employed. Different efforts have been made to support the well-being of residents, including the subsidization of electricity and water bills during the worse months of this pandemic. It goes without saying, that the government had and still has to face daily a quite relevant trade-off, between the economic costs and social benefits of sustained pared-down economic activity. While there may be calls for fewer restrictions and a swifter return of tourists, releasing the fiscal burden of the government and reducing the losses of local firms, the downsides associated with the possible re-emergence of COVID-19 will damage permanently the economy undermining social stability. The current situation has been managed through the adoption of a gradual and cautious approach to re-float Macau’s tourism industry, while employing prudent health policies.

Despite the fact that the path to full recovery is subject to uncertainty, Macau’s tourism sector is ready to rebound thanks to the strong health and economic policy settings in place. If a vaccine is successfully developed and widely spread, Macau seems to have the chances to bounce back into its position as the world’s tourism and entertainment hub. Until then, Macau is proceeding with its guard up.