After nearly a year of EU and US sanctions had been imposed on the Kremlin in 2014, Russia has decided to finally start its first issuance of sovereign debt. Russia plans to issue a “$3bn, 10-year Eurobond”, or at least this is what is expected (Barker, Seddon). Since the imposition of the sanctions resulting from the annexation of Crimea, Russia has been suffering several economic slashes which can be directly attributed to these restrictions. First and foremost, the “Central Bank of Russia jacked up interest rates by 6.5 percentage points” with the intention to resolve the currency devaluation that the rubble was undergoing (Elvis Picardo, CFA). But this had many unprecedented effects, such as inflation, a decrease in consumer spending, and most importantly a run on debt issuance. Russia now has the chance to begin issuing again to regain its position in the global capital market. 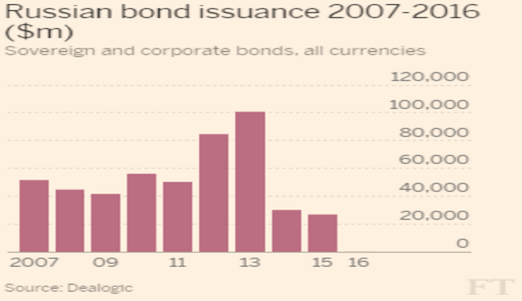 While companies were at first holding a positive outlook on this deal, growing ECB and US concerns led the initial interested parties to back out. Goldman Sachs, which initially submitted a bid for the $3 Billion Eurobond, has been pressed by the U.S. government to take caution and avoid to some extent this deal. Goldman was invited along with 28 other lenders, most of which were WS firms, to discuss the terms with the RCB and as a result to propose a pitch for the bond sale. Goldman was the first to submit the bid however with “the caveat that it was subject to approval from senior bank executives” (Anupreeta Das, WSJ). Now the deal is “very unlikely” regardless of the fact that State Department officials have not confirmed whether Goldman has officially backed away from Russia.

Given that the sectoral sanctions are still in place, many officials believe that Russia could use the funds gathered from this debt issuance to inject into “companies currently under sanctions and put the banks at risk of being in violation after the fact” (Anupreeta Das, WSJ). As a result, the political risk associated with the deal scared away many banks. Interestingly, banks have not been leveraging this to increase returns as a result, but instead simply left the table with their money. However, there have not been any direct sanctions on the Russian government which would imply “bondholders are unlikely to face trouble from regulators if the money is eventually used to support sanctioned entities” (Barker, Seddon). Moreover, many investors are backing away from the sheer belief that Russia might use these funds to support military operations which at this point are considered to be very controversial. The question here can be one of morality: are companies willing to maintain an optimist outlook on the Eurobond deal or should they remain cautious of the risks that could entail?

The scare that investors are running away from the deal could explain why in recent days Russia has begun improving its diplomatic ways the world over. Just Tuesday March 15th, Vladimir Putin had declared that we would be “withdrawing the majority of Russian troops from Syria” (Wintour, Walker). Once again we can see the strong influence that capital markets can have on achieving political goals; this time mostly positive ones.