Nothing describes the current state of the housing market better than the phrase “more buyers than sellers”. The imbalance between supply and demand has led to an increase in prices: the S&P/Case-Shiller 20-City composite index is now only 11% off pre-crisis levels.

Which are the reasons for this imbalance?

As far as demand is concerned the answers are two: Millennials and mortgage rates.
The generation X (people born from the early 1980s to the early 2000s) is the largest in American history and they are currently in the steepest part of the homeownership. Studies have shown that there is a positive correlation between home price appreciation and the share of population between the ages of 18 to 34. 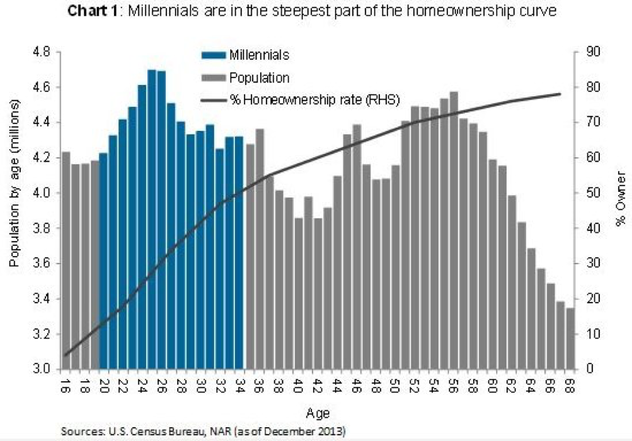 Mortgage rates for 30-year loans dropped as low as 3.58%, the lowest level since May 2013. The concerns of a slowing global economy drove investors to the safety of government bonds, which guide consumer debt. This rates’ level is likely destined not to change in the near future because of the decision of The Federal Reserve to hold interest rates unchanged.
That results in mortgage purchase applications going up in the first quarter of 2016: they were about 25% higher than last year ones in the same period and they are going to be the highest annual amounts since the crisis.

Regarding supply, the main factors are basically three.
First of all, reduced job mobility and stagnant wages. As a matter of fact single-family homes available for sale reached the lowest level since 1994. Secondly, the construction of multi-family units, which are now above pre-crisis levels, while the single-family ones are half of what they used to be before the crisis. And finally, the presence of a shadow inventory in excess of 8 million units generated by loans before 2007, which currently has been reduced to less than 3 million homes.

However, this situation is being positive for US homebuilder, such as Lennar. Its profits climbed to $144.1m in the quarter to the end of February and it exceeded the analysts’ prevision. “We continue to believe that the housing market is continuing its slow and steady recovery driven by years of under production, tight inventory levels, attractive interest rates and the lowest unemployment levels since 2008”, Stuart Miller, company’s CEO, said.

So far, all the factors indicate that such imbalance is likely to persist, with even a bigger houses’ price appreciation over the next years, helped by low mortgage rates, at least until the Fed will make a new decision.