Shares in Valeant lost half of their value on last Tuesday, after the prospect of defaulting on its 30bn of debt was raised by the company, along with the second cut of full-profit targets in five months.
The pharmaceuticals group now expects EBITDA to be in range between $5.6bn and $5.8 bn in 2016 compared to $6.9bn to $7.1bn range it issued in December.
However, at the beginning of the week, 21 of the 23 analysts tracked by Bloomberg were telling investors to buy or hold the shares, with UBS having a target price of $213: the Wednesday night’s close was $33.54. 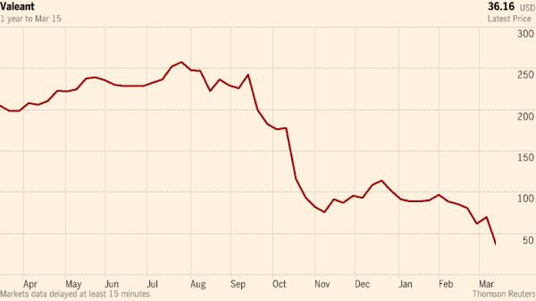 Some experts believe investment bank research is tainted by a need to win other line of business. The conflict of interest between analysts producing independent research and investment bankers is still real: “there is an overall pressure on analyst to wear smiley face when they look at companies” said Erik Gordon, a professor at the University of Michigan Ross School of Business. As a matter of fact, Valeant has paid $398m in investment banking fees since 2013.

With a market’s capitalization of $11.4bn now Valeant is worth less than the amount it spent on acquisitions in 2015, when it bought Salix for $11.1bn and Sprout for $1bn. 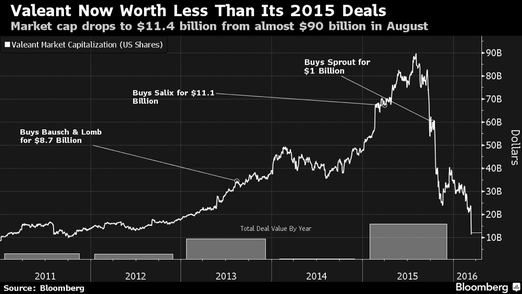 But that is not all. The CEO Mike Pearson reassured his employees on Wednesday, saying that they are not on the verge of bankruptcy and that he is confident they will be able to extend the deadlines in their loan agreements. Nevertheless, Standard & Poor’s said it may lower its debt rating deeper into junk, while Moody’s Investor Service cut its credit rating four steps below investment grade.
And yet the owners of the company’s bonds are demanding yields almost 2% higher than the average for other junk debt with similar ratings, as Bank of America Merrill Lynch index data shows. More trouble ahead? 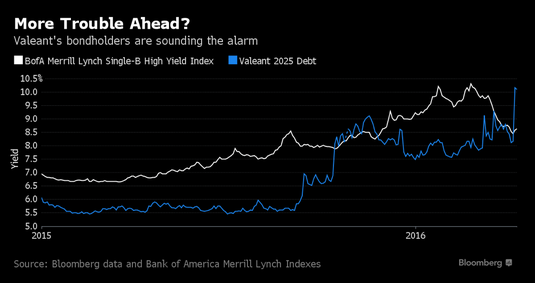