Recently central banks enacted negative interest rates. The main goal for central bankers is to stimulate consumption and investment. According to policy makers, the reduction will push down rates for lending, while not having a negative impact for banks. In fact, it will punish banks that store away cash instead of give loans to innovative businesses.
In theory, interest rates below zero should reduce borrowing costs for companies and finally demand for loans will increase. Eventually are we going to see a happy ending?

In practice, if banks would decide to make customers pay to hold their money, cash might go “under the mattress”. Fortunately, banks have not passed them on to their customers. Not yet.
In addition, as long as banks absorb the cost themselves, their profit margin will experience a considerable reduction. This may make them even less willing to lend, which is the opposite of central banks’ aim.

Undoubtedly, this choice could seem rather unorthodox. Actually, as we live in open economies, this strategy could prove to be dangerous. In other words, a weaker currency could induce investors to move their money out of the country. Therefore, net exports will upsurge. We should not forget US still has a positive policy rate. Furthermore, lower borrowing costs tend to support more debt-fuelled activities and consequently the overall country productivity will suffer.

Draghi said there are “no limits” on what he will do to meet his mandate. It sounds pretty like a threat. On the other hand, policy makers are just trying to prevent deflation i.e. a dangerous spiral of falling prices (which could actually prevent us from any possible recovery!).
To sum up, if negative interest rates work we will see the start of a new era for the world’s central banks. 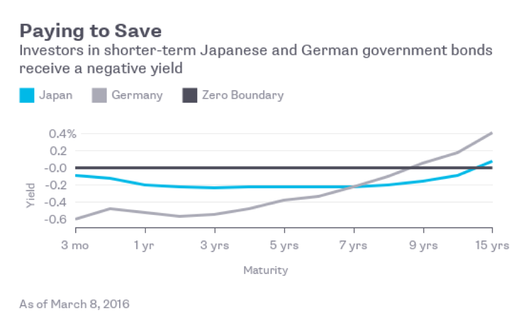 As we can see from the graph above Germany and Japan are not going to pay any positive interest in the short term. For ten years interest rates will remain “below zero”, which sounds rather “cold” to commercial banks.

Moreover, there is something new. "We're taking a look at them ... I wouldn't take those off the table," said Janet Yellen at a Congressional hearing. Many commentators believe that this will be the next step to pave the way to US recovery. US will not be alone for sure. Nowadays it is becoming quite a common trend. It is feasible for the U.S. to do it? That is the question. At the very moment Fed short term interest rates have values between 0,25% and 0,5%
.The common opinion is that US economy will find itself struck again into a recession. The main point is that even the most optimistic forecasts suggest that US economic activity will decrease if nothing changes. So why not give it a try? Dan Sichel (a former Fed economist) stated: “given the experience of other central banks, it can be done." It has to be done.