Neobanks: bubble or paradigm shift for the banking industry?

Since the financial crisis of 2008-2009, the banking industry especially in developed countries, has been suffering a heavy loss of trust and it is undergoing a substantial  reform ever since. The term ‘neobank’ (or digital bank) is used with reference to a digital startup challenger that has spread worldwide in the last decade, providing financial services – checking accounts, savings accounts, credit cards – via digital channels without any physical branches. This institution could either operate with their own banking license or work for an already-existing bank, purchasing its financial services wholesale and providing retail of them for customers.

Mainly driven by innovation-friendly regulatory reforms, the oldest neobanks are to be found in the U.S., like Simple founded in 2009 and Moven in 2011, which were considered to be a true revolution at the time. However, from then onwards, multiple new institutions of that type have joined the game, among which Aspiration, Varo, Chime in the U.S. and Revolut, N26 and Monzo in Europe. Although the U.S. has housed some of the earliest neobanks, yet only 3% of millennials have opened a neo-account over the past decade, in contrast with Europe where the neobanks’ ecosystem has expanded significantly. These different trends are not due to geographical differences per se, but rather to the ease with which the regulatory regime allows to obtain a banking license. According to an ATK research, since 2011 European neobank customer base has grown by more than 15 million of people and it is projected to reach 85 millions by the end of 2023.

The fertile ground for a substantial shift towards digital-only banking has been created by two main factors. Firstly, the freedom from historical regulations and restrictions over the financial sector and exemption from brick-and-mortar branches’ associated fees has certainly played a key role in the development of these institutions, especially in Europe. Secondly, consumers' (in particular millennials') growing frustration with legacy of traditional institutions combined with their increasing willingness to switch to digital solutions, has accelerated the shift to digital-only banking. Indeed, these banks provide highly customizable services, which can be perfectly tailored according to customers’ needs, such as an Internet space where people are allowed to communicate with each other, to share their opinions about the functioning of banking service, which is a way of socialization that gives the clients strong feeling of involvement.

On the other hand, neobanks deal with some major issues when it comes to customers’ acquisition. As a matter of fact, one main problem regards the fact that more and more of these are flooding the market, meaning that the competition between them is increasing, and another one consists in customers’ hesitation to leave their high-reputation, established bank to take the risk of letting such startups manage their money and savings. In addition, limits established by the State could also question the sense of existing of neobanks. In fact, in some countries the challengers could not even release the credit card without the support of traditional bank, and such type of challengers is clearly not able to compete with ordinary institutions. 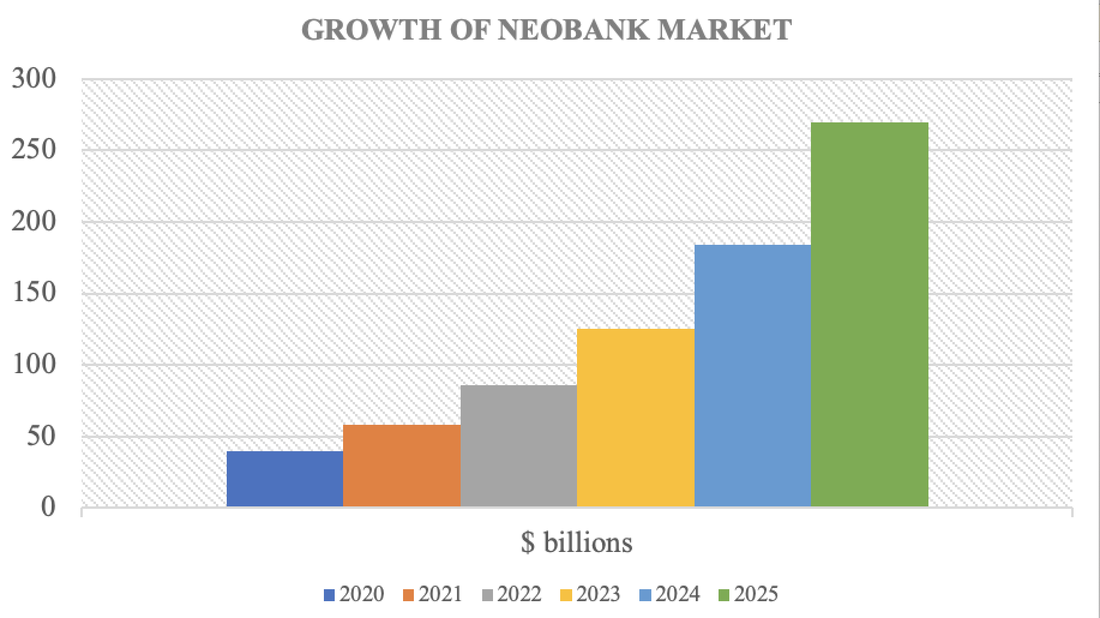 Source: Zion Market Research
However, it is undeniable that these new banks are gaining ground, also in the U.S., and might represent a true threat to well-known institutions, such as Bank of America or JP Morgan. As it is clearly visible from the graph, neobanks’ market accounts for about $39,000 million in the current year, and it is expected to register a dramatic growth with a CAGR of 46.5% in the coming years.
McKinsey has forecasted that, by the end of 2025, up to 40% of banks’ collective revenue could be at risk from new digital competition. More and more incumbent banks are indeed questioning themselves in order to find viable and effective solutions that would allow them to face the expansion of neobanks and overhaul their entire business model for the digital era. Evidence has shown that most of the biggest banks have already utilized major resources to digitize their businesses: more than 40% of North American banks have dedicated more than 25% of their IT budget to digital transformation. For example, two notable incumbent-owned outfits have had major success: Marcus by Goldman Sachs and Finn by Chase, which offer no-fee, fixed-rate personal loans, online savings accounts and certificates of deposit to help people achieve their financial needs.

Challengers are also having an important influence on the so-called ‘revenue-mix’, which reveals the broad type of activity that traditional banks engage in. The traditional mix was in fact made by roughly one third of revenue from services, one third from insurance and the last third from credit. Since in this scenario margins from services are clearly diminishing, banks worldwide are expanding their credit balances trying to reach out to smaller consumers, which can suffer a wider spread and at the same time investing in insurance branches in order to compensate for the loss in services.
​
To sum up, it is hard to predict with certainty the future of neobank sector. Despite the fact that the number of such institutions increases rapidly each year, registering a growing interest among both individuals and firms, some experienced players struggle to survive in the current circumstances and the highest penetration rate still belongs to traditional banks. Therefore, although there is a chance for neobanks to overrun traditional banks with the growing up of millennials, the main prediction is that neobanks would have little chances to survive on their own and they will continue functioning as the electronic appendix of classic banks.