Netflix: from the beginning to the last blowout quarter

How Netflix has reached its outstanding position, and what are the perspectives for the future

Founded in Los Gatos (California) in 1997, Netflix was initially a DVD and videogames rental business: users could book DVDs via the internet and receive them directly at home via the postal service. Since 2008, the company has activated an online on demand streaming service, accessible through a special subscription, which distributes TV series and documentaries in streaming and that soon became its main field of activity. In 2014 Netflix saw a fast increase in popularity, exceeding 50 million subscribers (35 in the US) that became 74 million 2 years later thanks to the extension of the streaming service to 190 countries. 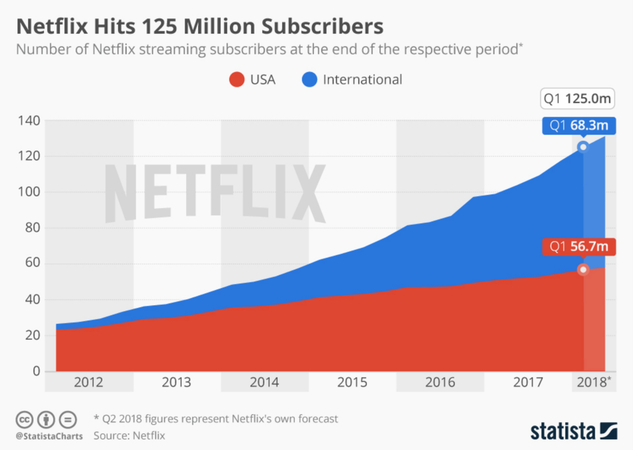 In less than 20 years it has reached an outstanding position and is now becoming one of the most relevant companies in its sector.
Netflix is now listed on Nasdaq with a Marketcap of over 100 billion USD and 125 million subscribers (20/04/2018). The last quarter of 2017 has been particularly profitable for the company that significantly outperformed earnings expectations: during these three months Netflix recorded profits for $ 186 million, or 41 cents per share, compared to 67 million, or 15 cents per share, of the same period the previous year.
Between October and December, Netflix has won a total of 8.34 million new subscribers, a quarterly record in the history of the group that exceeded analysts’ expectations of 6.37 million new users. The group has invested heavily on content and therefore the cash flow has been negative for $524 million at the end of the year. Despite that, Netflix’s CEO Reed Hastings believe that these “big investments are bearing fruit" and therefore the company intends to spend approx. 7 billion dollars in content during the current year. Investments in technology and development will be around 1.3 billion and marketing expenses will increase from 1.3 billion to two billion.
So, How’s Wall street reacting?  Investors’ fears about Netflix's ability to maintain its growth rates and about negative cash flows have been dissolved by the excellent results -above expectations- of the blowout quarter Oct-Dec 2017. Several analysts boosted their price targets on the stock contributing to make Netflix one of the year’s top performer in the S&P 500 Index. As can be seen from the chart below the stock earned 8% reaching $ 336.06 per share (17/04/2018), its historical maximum. The jump made the market capitalization hit over 140 billion dollars.

NFLX:US, NASDAQ
According to Benjamin Swinburne (Morgan Stanley), “In a rare combination, subscriber growth exceeded expectations” and continues “Netflix will scale to a large and highly profitable business, and 1Q results highlight continued momentum on both scale and margins.” Goldman Sachs’ suggestions confirm that” market expectations for subscriber growth and profitability both in 2018 and beyond remain too low and expect that as forecasts increase the stock will continue to outperform.”
Given that there is a large consensus about Netflix’s growth opportunity, it is relevant to observe how it is competing with the big four of the Silicon Valley (Facebook Google Amazon and Apple). Even if Google Facebook and Apple are per now offering different services with no overlap, the contrast seem more present with Amazon which offers for its “prime now” clients TV streaming services.
It is probably for this reason that Barry Ritholtz suggests on Bloomberg that Apple should buy Netflix in an all-stock deal for about $100 billion. This takeover would provide each company with a solution. Apple would implement its offer providing a television and film streaming service to its clients while Netflix would have the possibility to continue investing billions per year in content thanks to Apple’s liquidity. Moreover, both companies are aware that the most important competitor they have is Amazon. On the one hand, Apple would acquire a library of content that would instantly make it competitive with Amazon and, on the other, Netflix could stop worrying about how it is going to access capital to pay for its original content. Barry Ritholtz also observe that Apple TV sales could be juiced by including free Netflix memberships for 6 to 12 months with each new purchase.
The fact that the acquisition may be a distraction to apple core business may be a good argument against, but the high cost of the operation should not be considered one. Apple Market Capitalisation is now hitting $ 900 billion and it is on its way to becoming the first trillion-dollar company and a purchase of Netflix “would require swapping about 1 1/3 shares of Apple stock for each share of Netflix”
Regardless of the developments Netflix will implement, what we can be sure about is that the new streaming services provided at a relative low cost beat the traditional Pay-TV. As Sky has already made a European partnership with Netflix to avoid competition, Fox and other TV networks have to come up with innovative strategies to survive on the market.