On March 12, 2019, Nigerian e-commerce Jumia filed its papers for listing at New York Stock Exchange (NYSE). With an initial share price range of $13 to $16 per share, company is aiming to sell 13.5 million shares and estimates $233.5 million of net proceeds from the listing. Morgan Stanley, Citigroup, Berenberg and RBC Capital Markets led IPO is expected to be finalized by the end of April and could value the firm as high as $1.6 billion, therefore making it the 5th largest African company to be listed in US and 1st in internet industry.

Per Jumia’s listing report, the main purposes of the first African “unicorn” listing is to increase public image and awareness, boost financial flexibility, and secure future access to equity markets. The African start-up was launched in 2012 by ex-McKinsey consultants Jeremy Hodara and Sacha Poignonnec who received their first funding from German venture capital investor Rocket Internet. Started in Nigeria, the firm quickly established its presence across the continent and is currently operating in 14 countries. Jumia could be regarded as African Alibaba in the sense that it provides an array of different online services. Next to its main online shopping branch, there are also Jumia Food (food delivery), Jumia Pay (online payments services), Jumia Logistics (transport), Jumia Deals (ad services), Jumia One (app for paying bills), Jumia Travel (hotel booking platform), and other smaller businesses that operate under Jumia’s network.

Going into US equity markets is unusual for African companies as it is a complicated and risky step. With currency devaluations, unstable oil prices and low purchasing power of consumers, Wall Street is not particularly keen to bet on African markets. Due to high risk factors an African firm is doomed to be traded at a discount in US exchanges even if its investments are highly-safe in African standards. Saad Bendidi, who is a CEO at one of the largest African companies Saham Group, in an interview with Yahoo Finance has argued that many firms, therefore, shy away from American exchanges. They prefer large private equity investors who are more familiar with African markets and apply valuations that more truly represent firm’s value and riskiness.

Jumia, as well, was mostly funded by investors with history in African markets – African mobile telecoms MTN and Millicom are still the largest shareholders who together own over 50% of the firm. However, in 2016 Jumia made it to Top WIRED 100 start-ups list (selects best European startups) and in 2017 was included in Massachusetts Institute of Technology’s (MIT) most innovative world’s companies Top 50. With growing interest, Jumia received funding from many European investors as well as US-giant Goldman Sachs. This was, arguably, highly prompted by staggering growth percentages in African e-commerce business.

According to UNCTAD B2C E-commerce index, only 26% of Africans use internet compared to 84% in developed countries, which is a shocking difference by no means. Thus, in the continent with roughly 1.2 billion people, there are currently around 300 million potential online shoppers. However, while in 2014 only 13 million of them there shopping online, by 2017 this number had increased to 21 million what is a 20.6% average annual growth. Investors are putting their faith into this growth as it creates room for a lot of profit-to-make if it is to persist. 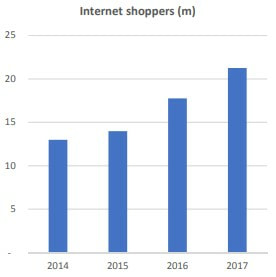 Figure 1. UNCTAD B2C E-commerce Index 2018 Focus on Africa.
Jumia started in Nigeria, where it already had a significant advantage against other African competitors – internet coverage in Nigeria is 2nd largest in the continent (after Mauritania), and with growing demand for e-commerce and internet services Jumia was the one that manage to take advantage of new inflows of customers. With a wide array of products, African “unicorn” pursued a successful lock-in strategy by providing multiple complementary products.

Jumia is not the only African e-commerce start-up that was founded in early 2010s: it has its main regional competitors in Nigeria-based Konga and South Africa’s Takealot Online. However, the industry is harsh for all these African pioneers. E-commerce is still not a common social behaviour and with many consumers preferring cash payments, most of these companies rely on future growth expectations and gather losses for now. DealDey, a local Jumia’s competitor in Nigeria, went bankrupt in December as it could not sustain its operations.

Jumia is also running losses and the numbers are only widening (Figure 2). The firm has admitted that by the end of 2018 it had accumulated a total of €862 million (nearly $1 billion) of losses throughout its existence. 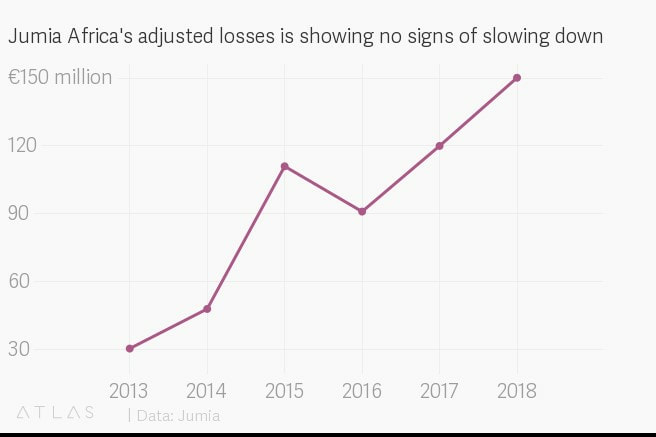 Figure 2. Atlas. Jumia losses.
Investors, however, should not be scared away by only looking at losses’ figures – Lyft and Tesla (until recently) have not been profitable either, yet they received high favourability from investors. That is not to say, that Fumia is operating in similar conditions as Tesla or Lyft (which it does not), but its sales are growing faster than losses and should break-even in a few years if growth persist.

The value of goods sold on Jumia platforms went up from €507.1 million in 2017 to €828.2 million in 2018. Revenues, respectively, went up from €94 to €130.6. That is a 39% increase compared to approximately 25% increase in adjusted losses. Jumia has raised around $700 million of funding from various investors, and, if successfully listed, could expand this number to $1 billion. This just proves that African e-commerce giant, above all, is a long-term investment and capable of absorbing losses for some years ahead.

While operating in riskier African markets and under e-commerce yet unconquered social environment, Jumia is, however, the leading player in the region. With annual sector growth of 20%, in a decade it may become an African Alibaba (at least in terms of size and operations). This may not be the investment for the most risk-averse investors, but many should be lured to add their first African stock into their portfolios.