How would CVS and Aetna fit together?
​

​On Oct. 26, 2017, CVS (NYSE: CVS) made a blockbuster bid for Aetna (NYSE: AET) for more than $66 billion amid a continuing reordering of the health-care industry. The proposal to acquire the health insurer is more than $200 per share, representing a 25% premium from the opening stock price of Oct. 26. Aetna’s stock price surged 11.5% on the date.
​ 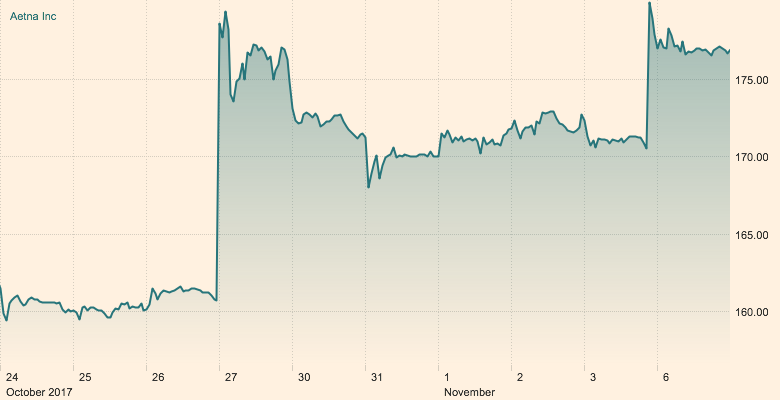 CVS is the second-biggest drugstore chain behind Walgreens Boots Alliance, with more than 9,700 retail locations. In 2016, CVS recorded $178 billion in sales, with more than half coming from its pharmacy-benefit operations, including selling prescriptions at stores or by mail, and managing drug benefits for employers and insurers.

Aetna is the third-largest U.S. health insurer, with revenues last year of $63.2 billion. Its biggest client base traditionally has been among employers, who use Aetna to provide their health benefits. Aetna has also been moving further into government business, having a growing membership in Medicare plans that seniors can choose in place of the traditional, government-run version.

Amazon’s potential entry into the pharmacy-services industry helped to spur this bid. In May 2017, Amazon hired a new manager to develop a strategy for breaking into the pharmacy market, and since then it has gained wholesale pharmacy licenses in multiple U.S. states. CVS and Walgreens shares dropped roughly 3% following the news.

E-Commerce hasn’t taken root so far in the pharmacy business. Many prescriptions are filled at brick-and-mortar pharmacies like CVS. However, the pharmacy market is ripe for disruption, similarly to what book selling was, especially if Amazon can provide the kind of one-click convenience it offers for other products.

After federal antitrust regulators rejected Walgreens Boots Alliance’s proposed acquisition of Rite Aid in June, CVS realized that the solution of intensifying competition must come from beyond traditional channels. After eyeing potential targets, CVS decided that Aetna would fit well with it.

Aetna’s market value is nearly $60 billion, so CVS would need to pay largely with stock. The recent decline in CVS share price makes that more expensive. The valuation gap between the two companies has narrowed significantly since they began to talk. Swallowing a company like Aetna would also put some stress on the CVS balance sheet, which had about $25 billion in net debt at the end of June.

For insurers considering using CVS as a pharmacy-benefit manager, the ownership of Aetna would be problematic, because they are going to price more favorably to themselves. Moreover, insurers are nervous about sharing detailed data with a competitor. The most immediate question for CVS on that front will be its deal to service Anthem. In a statement, Anthem said that during its evaluation process, “we considered various strategic possibilities and prioritized flexibility in developing our contract to maintain the ability to adapt to a changing and dynamic marketplace if appropriate.”

Conclusion
​
The healthcare industry is facing new pressures, especially from new entrants such as Amazon. The urgency derived from such threats, as well as the recent necessity to lower prices, triggered CVS to make the bid for Aetna.

A deal for Aetna would advance CVS to move further into health care, and its health benefits provided for clients would be more unified. However, investors have some reservations that this deal will close successfully. This uncertainty was reflected in a lower Aetna’s share price, which was more than 10% below the offer price.