Established in 1990 as the Petroleum Fund of Norway, the Norwegian Government Pension Fund Global, generally known as “The Oil Fund”, has been created to preserve and invest Norway’s oil revenues for the generations to come. Today it manages over 7,500 billion kroner (ca. $900 billion) making it the largest sovereign wealth fund as it owns 1.3% of world’s equity market and 2.3% of the European one.

“The Government Pension Fund Global is saving for future generations in Norway. One day the oil will run out, but the return on the fund will continue to benefit the Norwegian population.”
Norges Bank

In 1969 the first offshore oil field was discovered in Norway’s continental platform and the government started to sell drilling rights, collecting massive amounts of money from oil companies making Norway one of the richest nations in the world (2016 PPP GDP per capita $69,296). Being that oil and gas are finite resources, they are expected to run out around 2060; the government then began to think of ways to preserve Norway’s massive wealth for future generations and created the fund to amass and invest this wealth.

The target of the fund is to be composed of 60% equity, 35-40% fixed income and 5% invested in real estate properties. Today the real estate portfolio is continuously structured and accounts for only 3.1% (with a target increase of 1% per year up to target 5%) of the portfolio while fixed income and equities are at 36.3% and 60.6% respectively. It is important to remark that the fund cannot invest directly in Norway because it is necessary that returns are not correlated with local economy as a counter-cyclical resource of funds.

Furthermore, it is important to highlight the very strict policy in which equity investments are subjected: the fund cannot invest in companies which produce tobacco-based products, coal, nuclear weapons (Boeing, Northrop Grumman, Lockheed Martin), and cluster munitions. It also excludes from the fund companies who have been accused of having violated human rights (such as Wal-Mart), have caused severe environmental damages (Rio Tinto) or have been involved in major corruption scandals (PetroBras is currently under special observation).

The fund is also subjected to strict budget rules as the government can use it to face budget deficits for a maximum of 4% of the fund value each year, this rule has been set to prevent the government from relying too much on the fund and to preserve the market value of the fund. The historical return has been 5.6% per year, greater than the 4% which can be withdrawn by the government. 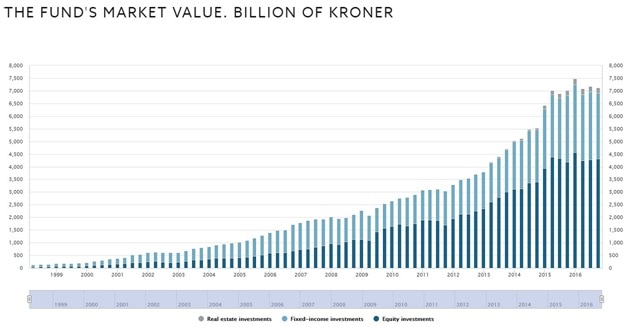 In recent years, to avoid an outright recession after the collapse of oil prices, the government had to dramatically increase the expenditure and now Norway is facing massive budgetary deficits estimated around 8% of GDP in 2016 (without considering the use of the fund which accounts for 179.6 billion kroner or $15 billion). It also had to withdraw resources from the fund to fix the leak. As the deficit is not expected to decline in the years to come, the central bank which manages the fund, warned the government about the possible sharp decline in the fund’s resources if these withdrawals continue in the future. Norges Bank (Norway’s central bank) called for a lowering in the maximum yearly withdrawal from the fund asking for a reduction to 3%. The central bank also presented a possible worst scenario, with a 1% probability to happen rising to 5% if the withdrawals will further increase, in which the value of the fund declines 50% over 10 years if this abnormal use of the fund continues.

Even in a steady withdraw scenario, the situation is far from being alarming. The fund estimates liquidity inflows from real estate, bonds, and dividends at 207.5 billion kroner. Thus, it does not have to sell assets yet to contribute to national budget. 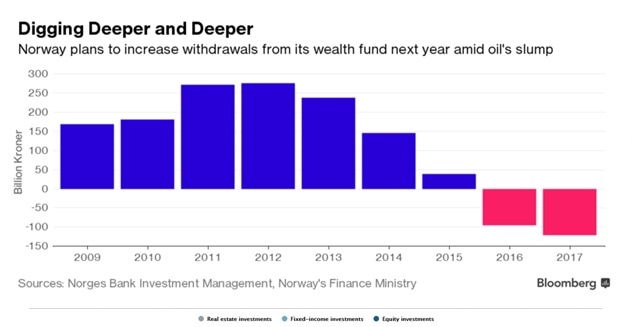 Central banker Oystein Olsen has even asked the parliament for authorization to increase the maximum share of the fund investable in equities to 70% to face a sharp decline in government and corporate bonds’ returns, due to accommodating monetary policies following the financial crisis. In addition, he asked to keep its expected return close to the target of 4% at the price of more risk and volatility bore. It is important to highlight that the fund has a holding period of more than a century and stocks have statistically been one of the best assets in the long term; the fund should be able to face periods of strong volatility. The investments in real estate have also been added to the portfolio in 2011 to face all-time low yields on bonds, most of the properties are located in the US.

These measures, along with the expected end of the period of low oil prices and the consequent economic recovery in Norway, should allow the fund to maintain intact its capital and its role of source of wealth for the generations to come. It is another example of efficiency and wise policies from Scandinavian countries from which many southern European countries, first and foremost Italy, have a lot to learn.