Norwegian Air:
​Is the Most Shorted Airplane Stock Undervalued? 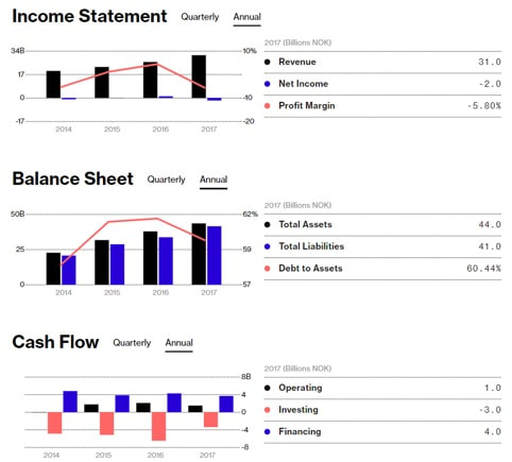 Exhibit 1
On Friday May 4, Norwegian’s shares fell 10.5% to NOK269 after news of the lack of agreement with IAG. Norwegian Air board has unanimously rejected the two offers from International Airlines Group, the parent company of British Airways, arguing that both bids undervalued the low-cost carrier. The CEO of IAG, Willie Walsh, has denied that the company have still made a “formal offer” to Norwegian. Last month, after that IAG declared the 4.6% stake in Norwegian Air considering a full offer, the share price jumped from NOK179 to Nrk264 in just one day touching 310NOK in the next sessions.

Norwegian Air has expanded from a regional low-cost carrier into a trans-Atlantic colossus shaking rivals with fares as low as $99, recording $250 negative earnings in the fourth quarter of 2017 [Exhibit 1], when other many airlines are seeing near-record profits. The CEO Bjorn Kjos blames last year’s loss on a pilot shortage and engine glitches that delayed the operativity of new jets. Norwegian Air is known for its unconventional strategy of buying most of its fleet and claiming that without a critical fleet size, and a modern fleet, is impossible to have efficient operation. Last year 38 new planes where prepared for service and in March Norwegian Air was forced to raise new equity equal to almost 25% stake of the company market value to avoid breaching minimum capital requirements demanded by lenders. Creating its fleet, Norwegian is piling a huge amount of debt, with $2.9 billion in debt and planned expenses of $4.5 billion only in 2018 and 2019. Norwegian Air is by far the most leveraged discount carrier, with a L.T. debt-to-equity ratio of 539 that has raised speculators interest that since 2002 are betting against Bjorn’s Company [Exhibit 2].

Exhibit 2
The actual market value is around $1.6 Billion, but the Norwegian Air CEO claims that it is undervalued given the huge potential of growth and market size that this ambitious company is targeting. In 2012, Norwegian made Europe’s largest ever aircraft purchase, 222 jets with a book value of $21.5 billion to be delivered over the course of a decade. Since this order has been mainly financed by debt, lenders are asking more guarantees for Norwegian’s new loans and leases – shrinking the financial sources margins available – and more cash on hand, which is fundamental for Novergian’s strategic targets. With a more cautious lending market, Norwegian’s low efficiency [Exhibit 3] is not helping to stop the increasing influence of lenders over Norwegians strategic challenge, making source of financing the first actual concern for this highly leveraged company.
People really close to the company that has preferred to remain anonymous, given the confidentiality of the information, have declared that the company is valued around $3 Billion including debt, also saying that a full takeover is highly unlikely. According to Goodbody analysts Mark Simpson and Nuala McMahon, for AIG financing would be manageable given IAG’s size, shifting the question mark on Norwegian’s low profitability outlook. ​ 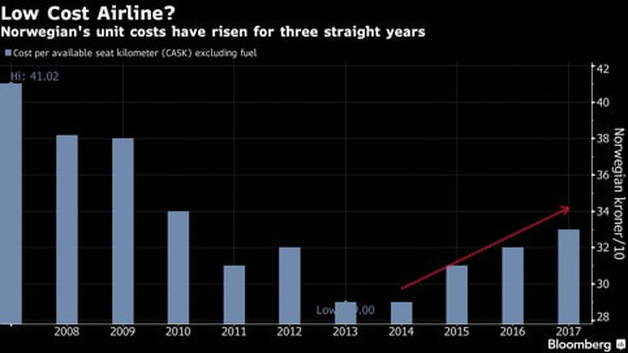