Earlier this month, Novo Banco announced the beginning of “Project Nata 2”, the largest sale ever of non-performing loans in Portugal, valued at €3.3 billion. The State-rescued and private equity-backed institution is continuing and accelerating the winding down of problematic assets, after a series of events that share one common goal: reducing the proportion of bad loans in the Bank’s balance sheet to levels comparable to those of European peers.

Company Overview
Novo Banco was created in 2014 to incorporate the “good” assets of the collapsed BES, at the time second largest bank in Portugal by net assets. The lender was rescued in the aftermath of the sovereign debt crisis of 2011 by the Portuguese state, which injected €4.9 billion into the financial institution, becoming the sole shareholder.

One of the most relevant financial institutions in Portugal, Novo Banco had, as of December 2018, net assets worth €48.2 billion and physical presence through 402 branches. Nevertheless, the financial institution still generated losses of €1.4 billion in 2018, mainly due to the impairments created by the sale of toxic assets. The Bank has been divided into two segments to efficiently handle the series of divestments of bad assets, while saving and growing the core business. The “Recurrent” part of the Bank, which excludes a set of toxic assets included in the “Legacy” segment, showed a positive net income in 2018 for the first time, even if with a shy €2.2 million, which in turn compare with the loss of €311.4 million in 2017. Simultaneously, Novo Banco needs to keep cleaning its balance sheet by getting rid of portfolios of problematic assets which are hurting the Bank’s financial situation.

Sale to Lone Star and Contingent Capital Mechanism
In 2017, Lone Star acquired 75% of the equity of Novo Banco from the Resolution Fund for €750 million. The sale had been long expected, after 3 years of openly positioning the bank for a privatization. The deal included a mandatory capital injection of €1 billion by Lone Star into the Bank, together with a raise of €400 million Tier 2 capital in the market.

The sale to Lone Star of 75% of Novo Banco’s equity entailed an agreement which established a limit of €3.89 billion to the amount that the Resolution Fund may have to inject into the financial institution. To this day, the bank has in total asked close to €2 billion from the Fund, including the €1.15 billion from the recent injection request which has yet to be approved by the latter. However, the limit set in 2017 during the privatization of the bank is unlikely to be reached, given the current situation. “If the process continues to move as it has been, this number [€3.89 billion] will not be reached”, said Máximo dos Santos, Vice-Governor of the Bank of Portugal. This means that the Central Bank does not expect future impairments generated by NPL sales to impact Novo Banco’s capital ratios in a way such that this would force the Resolution Fund to provide the full remaining amount of possible funding to the institution, as per the Contingent Capital Agreement (“CGA”) signed at the time of the transaction with Lone Star.

According to the CGA, the Resolution Fund guarantees funding to the institution such that the latter is ensured to be compliant with the minimum CET 1 ratio, as long as the €3.89 billion limit is not reached. This mechanism was set for a period lasting 8 years following the acquisition and is extremely relevant in the topic of divesting and winding-down of toxic assets of the Bank, since the sale of an NPL portfolio generates impairment losses, hurting Novo Banco’s financial condition and its capital ratios. Every time the Bank’s capital ratio goes below 12.5%, the Resolution Fund has to ensure capital injections according to the contingent capital mechanism, in case the ratio was damaged by impairments caused by the sale of assets belonging to a bundle previously agreed by Lone Star and the State. Another way in which the CGA forces the Resolution Fund to provide funding to the Bank is by having the former intervene in debt issuances in the capital markets. In fact, when Novo Banco issued unsecured debt in June 2018, the Resolution Fund would have needed to provide funding at an agreed, but unknown to the market, interest rate, in case the rate asked by the market were higher than this level. Fortunately for both Lone Star and the Resolution Fund, this was not the case, however.

The Contingent Capital Mechanism has been successful so far, and as Figure 3 shows, the Novo Banco’s capital ratios are sustainably growing and complying with the requirements, with CET 1 ratio at 12.8% and total capital ratio at 14.5% in 2018. This mechanism is essential, as it allows the Bank to sell portfolios of toxic assets while being protected from impairment losses by guaranteed funding from the State, allowing the institution to continue its operations normally. 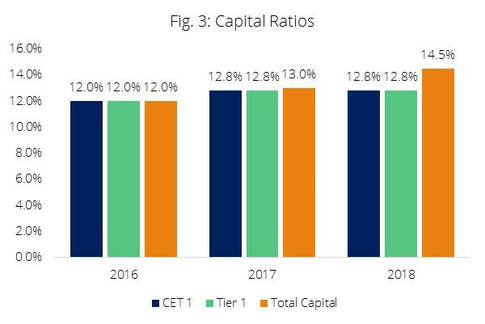 The agreement between the Resolution Fund and Lone Star also stated that the American fund cannot receive dividends from Novo Banco for 8 years following the acquisition, nor can it sell its participation before completing a holding period of 3 years.

Project Nata - 1st Tranche of NPL Portfolio Sold to KKR
In December 2018, Novo Banco officially confirmed the agreement to sell a portfolio of non-performing loans worth €1.75 billion to a consortium composed of KKR and LX Partners. This transaction, named “Project Nata”, was one of the main components of the Bank’s strategy regarding the disposal of assets considered problematic. It was comprised of two parcels: one worth €550 million, representing credit conceded to a total of 54 companies, and one worth €1.2 billion, comprised of granular credit given to a total of 62,600 entities, including both secured and unsecured loans.

This transaction followed the REO disposal that took place in October 2018, when Novo Banco sold a real estate portfolio to Anchorage Capital Group for €390 million, in the so-called “Project Viriato”. The portfolio had a book value of €717 million and comprised 8,726 properties with residential use.

This project consists of a portfolio of NPL valued at €3.3 billion, the largest NPL portfolio ever for sale in Portugal, and comprises one thousand corporate loans, 70% of which are unsecured, while the remaining 30% are backed by some sort of collateral. Earlier this month, the Bank’s CEO, António Ramalho, had hinted that the sale would soon start, by mentioning that the Bank is aiming to reduce the non-performing exposure ratio down to 12% by the end of 2019. This is an ambitious target given that the ratio stood at 22.4% at the end of 2018, as seen in Figure 4. Nevertheless, a reduction of €3.4 billion in the amount of non-performing loans on the balance sheet was achieved in 2018, from 2017 levels of €10.1 billion. Therefore, it wouldn’t take a miracle to see Novo Banco reach the 12% target. Given recent pressure from the ECB to reduce the NPL ratio even further down to 10%, Mr. Ramalho’s announcement of Nata 2 might just be what the Bank needs. 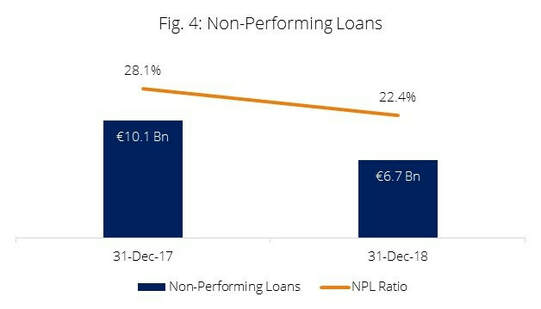 However, the process is still in a very initial state. Novo Banco will be receiving non-binding offers from investors until the end of March and only interested parties have access to the detailed information on the assets being sold. As mentioned, KKR, Cerberus and Bain have been rumoured to be interested in the transaction. Having acquired €1.3 billion, €900 million and €800 million of Portuguese NPLs (book values), respectively in 2018, the three funds were among the top 5 buyers of Portuguese non-performing loans last year. While only time will tell who the ultimate buyer of Nata 2 will be, it is safe to say that Novo Banco is cleverly positioning its non-core assets and timing disposals accurately in a market in high demand.