Saudi Arabia Prince, Mohammed bin Salaman said in a recent interview that the world’s biggest oil exporter could increase daily output of 1ML barrels, reaching a daily production of 11.5 ML barrels. This Sunday, representatives of the OPEC countries are meeting to discuss the possibility to freeze oil output. However, there are already some concerns over a possible agreement, indeed, Iran’s representative said that there are no grounds for an agreement until Iran will reach the output it produced before the international sanctions. On the other hand, the other crude oil exporters including Russia, Venezuela and Nigeria, regardless of Iran’s plans, are in talk to reach an agreement in Doha this Sunday 17th April. 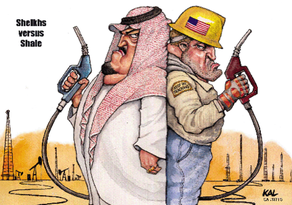 ​That is, however, just a part of the story. On the other side of the world, the biggest US banks Wells Fargo, Bank of America and JP Morgan, which are heavily exposed to energy loans, just announced to set aside billions to cover for potential losses. Indeed, from the start of 2015, 51 North America oilfield service companies have gone bankrupt and many more companies still find difficult to stay alive with oil at $42 per barrel. In addition to that, when oil was at $100 per barrel lenders were more than happy to give out loans to small, credit risky players and today high-yield loans are becoming more and more risky.

So, What’s next for oil output?

There are only two possible scenarios. Either oil price will rise, filling up OPEC countries pockets or oil price will go down, harming the ability of most energy company to survive. The first scenario might be more likely, even though OPEC countries don’t love each other, economic interests are crucial and as of today, all OPEC countries are suffering because of cheap oil. Hence, a logic and profitable solution is to reach an agreement and freeze output.

However, biggest players, such us USA, Saudi Arabia, Russia and Iran, which tried to compensate cheap oil with quantity, are pumping more and more oil. So, what if OPEC countries will decide to just pump more? Inevitably, in this scenario output will increase and oil price will go down.

But, a more interesting third scenario might arise; the biggest players might voluntarily agree to increase oil output to levels never seen before and push small players out from the market. Indeed, most of the big players have already built new Infrastructures and Networks and cheap oil gave them the opportunity to increase efficiency and cut unnecessary costs. With cheap oil, only the biggest players could still make money.

But how is likely that a fierce war would start?
Saudi Arabia’s prince just claimed that in few months its country could produce 20ML barrels a day. Brazil, the 9th producer in the world is amid of political instability and economic recession. Venezuela and Nigeria are also very weak, the former is almost going bankrupt and the latter is constantly losing market share because of continuous repairs in its pipelines. If an agreement won’t be met soon, a new oil war might come, but I do believe it will be very cruel. Saudi Arabia, Russia, US and China, which represent 50% of the entire world oil production know that they could stay alive with oil at $20 per barrels for years and they also know that most of their competitors, probably all of them, cannot. Would you bet that a new coalition made by the biggest oil exporters would never start a voluntary price war?