On the 14th of September 2019, the oil processing facility of the world’s largest oil producer and exporter – the Saudi Arabian Oil Company, more commonly known as Saudi Aramco – was attacked by military drones. The attacks on the plant of Abqaiq and on the oilfield of Khurais have had serious impacts on the production capability of the Saudi energy giant. The daily production of oil barrels by Saudi Aramco has been halved, and it may take several months to go back to normal production levels, despite managers’ optimism for a shorter recovery time.

The Saudi Arabian company is trying to meet export demand by drawing down on its oil inventories, even if this move, according to some analysts, might leave the energy giant more exposed to future shocks. Saudi Aramco’s management has also decided to postpone its long-awaited IPO that was supposed to take place on October 20th. The Saudi company decided that it is going to wait until it will be able to provide investors with more details on the impact that these attacks have had on their quarterly earnings.

While the direct responsibility of the attack remains unclear the backlash on oil prices is much more evident. Prices of oil surged abruptly in response to supply shrinkage. As shown by Graph 1 the price of oil increased from 54.85$ per barrel to 62.90$ per barrel. This is a 14.67% rise, the highest intraday increase for the 21st century. 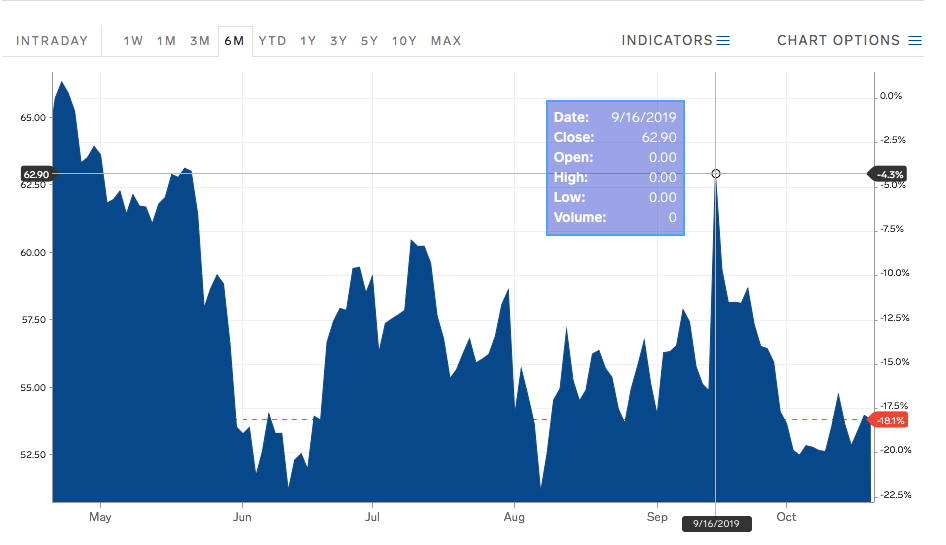 However, while this price increase is for sure impressive, the value of a barrel of crude oil today still remains well below the highest historic levels that it has reached in the past. In fact, it is enough to go back a few of month to find a day in which the oil price was higher than what it is today. It is no surprise then that there has been just a mild reaction in the equity market, as investors do not seem to be worried by the current situation. Graph 2 shows how the FTSE 100 and the S&P 500 lost only 0.6% and 0.3% respectively on the day following the attacks.

Nevertheless, these attacks still might have significant consequences for the global economy. While the world is for sure not as dependent on oil as it was in the 1970s, when an increase in the price of oil had sent the developed world into a recession, there still remain channels through which a surge in oil price might affect some countries around the world, in particular those which are net oil importers, such as China, Turkey and Argentina. With the last two already in a difficult position, the increase in oil price might be unmanageable for them.

On the other hand, the United States and Europe seem to be the less affected by these attacks. The United States have been building up reserves of oil for the past years and therefore there shouldn’t be a decrease in the U.S. GDP caused by the rise in the oil price. The European Central Bank, in a time when the oil price was at 75$ per barrel, a much higher value than what it is now, had claimed that there would have been no effects on real income or consumption as long as the oil price remained around the $75 price range. The only significant effect coming from such a surge in price would be an increase in inflation, which often follows an oil supply shock. However, this cannot be considered an adverse shock as the Fed and the ECB have both been trying to increase their respective inflations in the past years to bring them up to their target levels.

According to some analysts the price of oil might see some further fluctuations in the coming months as investors fully price in a higher risk premium deriving from instability in Middle East. The apparent ease with which these attacks have been carried out shows the extreme vulnerability of these kind of facilities to drone attacks. There is in fact no guarantee that other attacks will not follow in the future causing further disruption in the oil supply.

In conclusion while the attacks on the oil refinery of Saudi Aramco might not have caused immediate serious economic problems for many countries, the possibility of future attacks and an even greater pressure on the oil price remains significant. With the world economy on the brink of a recession an oil crisis might come with the worst possible timing.