On April 19th, the Brisbane-based Orocobre Limited announced an agreement with the peer Galaxy Resources Ltd. to merge in a A$4 (US$3.1) bn deal. This union will give birth to the world’s fifth largest player by market capitalization in one of the fastest growing industries: lithium chemicals.

Lithium Market Overview
Lithium is a fundamental material in the production of electric car batteries. According to Macquarie, after two years of depression, lithium carbonate prices have risen by 70% this year, due to the strong demand of electric vehicles. Moreover, the bank’s forecasts show that the electric car demand will make “the lithium market move to deficit in 2022 with material shortages emerging from 2025”. As a consequence, Electric Vehicle (EV) sales are expected to grow at a CAGR of 30% in the next decade, thus resulting in a considerable upsurge in lithium demand. Such an optimistic view stems by the extraordinary growth in EV demand (e.g., Europe reported a 109% growth YoY in 2020). The key drivers of this phenomenon are, according to analysts, the improved affordability and range of EV and the changes in countries’ regulations which usually results in carbon emissions penalties. Consequently, major lithium producers expect the demand to grow in the range of 17% to 20% in the following years. Moreover, analysts expect a robust demand also in the medium-long term. Therefore, the new entity will play a major role in a skyrocketing industry.
Orocobre Limited
Orocobre Limited is an Australian (Brisbane-based) mineral resource company. The company operations regard the mining of lithium and borax in Argentina and Canada and are divided into three main projects: Salar de Olaroz, Borax Argentina and Advantage Lithium. Moreover, in partnership with Toyota Tsusho Corporation (TTC), Orocobre has started the construction of a lithium hydroxide plant in Japa that will further reinforce its position as a global lithium chemicals producer.

Galaxy Resources Limited
Founded in 1996, Galaxy Resources is a lithium mining company based in Perth (Australia). The Company has a diversified portfolio of assets with operations in Argentina (Sal de Vida), Canada (James Bay) and Western Australia (Mt Cattlin). While the first two projects are still at a development stage and involved the exploration of minerals, the Mt Cattlin is active since 2009.

Source: Orocobore-Galaxy Merger Report
The Deal
The deal aims at establishing a diversified production base around the globe and boosting the group’s financial position with the final objective of fostering growth by exploiting skyrocketing  lithium demand. In fact, as stated by Galaxy CEO, Simon Hay, “The transaction will allow the group to materially accelerate the development of our combined growth projects, and this growth is perfectly timed to meet the demand surge coming from our customers”.

The merger will generate significant synergies for both the companies as the new entity will use its knowledge from the Orocobre Olaroz plant to speed up the construction of the Sal De Vida project and to develop further operations. In fact, according to Reg Spencer - analyst at brokerage firm Canaccord Genuity -, the NewCo will expand its annual production capacity of lithium carbonate 40,000 to 130,000 tonnes by 2025, thanks to the newly generated operational synergies. Furthermore, the management is expecting substantial savings from expertise sharing, employee and contractor sharing, procurement savings. Moreover, further savings will emerge as a consequence of the consolidation of corporate and support functions.

However, the advantages are not limited to the operational side. In fact, the deal is expected to give rise to a considerable strengthening of the new entity balance sheet and financial position, as it would have US$487 m in cash, which facilitate the company’s access to funding. As stated by Martín Pérez de Solay, Orocobre chief executive, “The company will have a very, very strong balance sheet and that will enable us to raise debt whenever it is required to develop projects [...] quickly”. The stronger  balance sheet will consequently allow the NewCo to accelerate multiple growth projects in parallel. 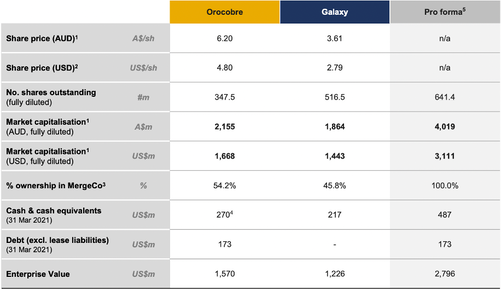 Source: Orocobore-Galaxy Merger Report
Galaxy is advised by Standard Chartered Bank and by Ashurst as legal advisor, while the Australian branch of UBS AG and Jones Day  are respectively Orocobre’s legal and financial advisor.

Under the Merger Implementation Deed, the new entity will be headquartered in Argentina. Martín Pérez de Solay will become the CEO of the combined group, while Simon Hay will become the President of International Business reporting directly to the CEO. Moreover, the transaction will be an all-stock deal of A$1.78 (US$1.38) bn, resulting in a A$4 (US$3.1) bn market capitalization and almost US$2.8 bn Enterprise Value combined entity. Moreover, the NewCo will have a geographic exposure to the world's major lithium producers.

The deal has been positively greeted not only by the management – who considers the transaction as a way to “materially accelerate the development of […] combined growth projects – but also by the market. On the day of the announcement both Orocobre and Galaxy shares rose respectively by 5% and 2.7%. In addition, the merger has already received the unanimous approval and support of the Galaxy board and it is now subject to shareholders and Supreme Court of Estern Australia approval. It is due to be concluded in August 2021.