Peloton: Will the “Netflix of Fitness” succeed despite disappointing IPO?

On the 26th of September, Peloton Interactive Inc. (PTON) went public on Nasdaq by securing a $8 billion equity valuation. The American exercise equipment and media company offered 40m shares at a price of $29 per share, raising a total of $1.2bn in equity financing. While, after the offering there will be around 280m stocks A and B outstanding. The company’s valuation largely outstripped the $4.2bn price tag reached after its last round of private fundraising in August 2018. However, as public trading began, the $29 list price paid by underwriters seemed not to enthusiasm investors. Indeed, the stock opened at a price of $27 on the market. This was followed by further pessimism, with Peloton shares trading as low as $24.75 per share, before rising slightly and closing at a price of $25.76 per share. Yet, this was 11.2% lower than the original price tag of $29 set by underwriters. In the following weeks, PTON shares have continued moving downwards, with their price now equal to $23.66 (17th October). Is this pessimism justified? 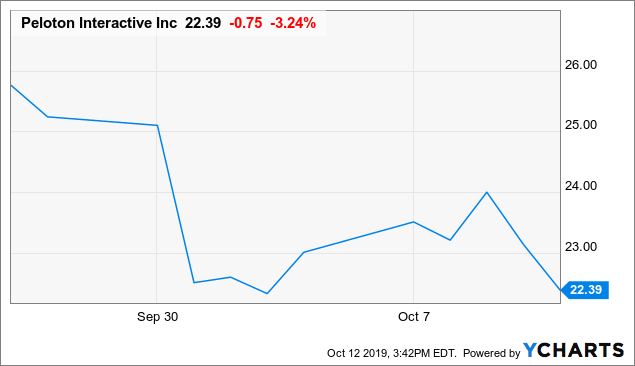 Peloton was founded in 2012 with the main objective of making fitness more convenient, affordable, and accessible. The CEO and co-founder John Foley realized that going to the gym was a hard task for many people due to a variety of reasons, ranging from demanding jobs to the presence of small children at home. All these daily commitments always created countless barriers to working out and prevented people from having a healthy lifestyle. Therefore, he came up with the idea of creating a company that would allow people to work out and participate in fitness classes directly from their homes, at any time they wanted and with the support of high-energy and highly qualified instructors.

Peloton has created the largest fitness platform in the world with a community of over 1.4 million members. This was achieved through the creation of two products: the “Peloton Bike” ($2,245) and the “Peloton Tread” ($4,295). Up to now, this might not seem as an actual breakthrough. What has actually determined Peloton’s success lies in the high-definition touchscreen placed on both of these fitness products, which has earned Peloton the nickname of “Netflix of fitness”.

​Through its touchscreens, Peloton offers world-class digital fitness and wellness content, allowing its customers to access both live and on-demand fitness classes in a variety of disciplines: cycling, running, boot camp, yoga, strength training, stretching, and meditation. The quality of the content is constantly updated, with 950 new streaming fitness programs being produced by Peloton each month. Moreover, the variety of training programs offered allows each customer to find a class that best fits its interests in terms of class type, instructor, available equipment, area of physical focus, music genre, length and level of difficulty. In 2019, customers have completed over Peloton 58 million workouts, with the company claiming that Peloton members worked out 80% more than non-Peloton Members. 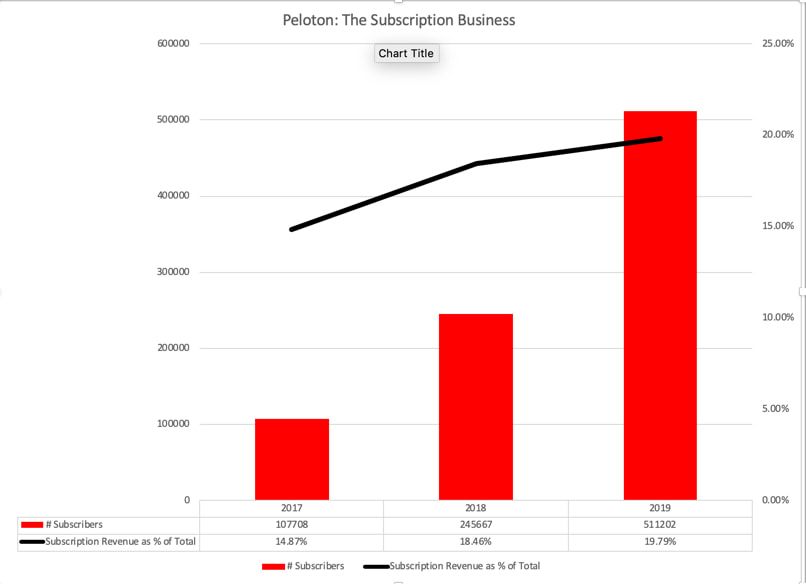 Musing on Markets
For fiscal years 2017, 2018 and 2019, the company generated total revenues of $218.6 million, $435.0 million, and $915.0 million, respectively, representing a 99.0% and a 110.3% year-over-year growth. The company generates about 80% of its revenues through the sale of its hardware products, namely the “Peloton Bike” and the “Peloton Tread”, of which it sold about 577,000 units in 2019. The other 20% is granted by revenues from subscription fees that customers pay to utilize Peloton’s fitness streaming services. The company has two main subscription packages: “Connected Fitness Products” and “Peloton Digital”. The “Connected Fitness Products” subscription costs $39.00 per month and allows customers to access unlimited fitness streaming services on their Peloton machines. The “Peloton Digital” instead costs $19.49 per month and allows users who don’t possess a “Peloton Bike” or “Peloton Tread” to access the streaming content from their iOS and Android mobile devices.

With regards to its hardware business, Peloton has a consistent 43% gross margin. This is quite good, considering that Apple, the world’s most profitable tech hardware maker, has a lower margin of 38.5%. On its subscription business, the Company registers a gross margin of 50.8%, which is below the industry trend (around 70-80%). 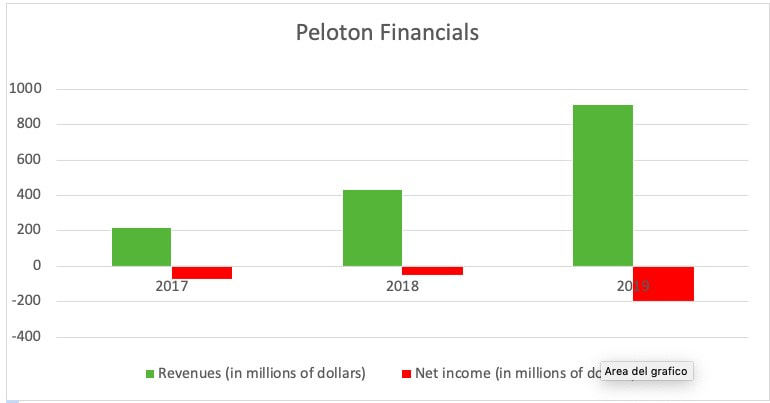 Despite this, for the years 2017, 2018, 2019 the company has registered losses of $71.1 million, $47.9 million, and $195.6 million respectively. Peloton is quite a cash burning company that has to constantly make new investments to retain its competitive advantage. Peloton invests heavily in research and development, developing new hardware products and improving the streaming content services. In order to do this, Peloton has already planned investments for the opening of two new production studios in London and New York. Furthermore, Peloton will have to invest lots of money in expanding its supply chain and logistic operations and will require money to complete acquisitions or investments in strategic partnerships. In addition, marketing, sales and G&A expenses are increasing in line with its revenue growth.

Net proceeds from the initial public offering are expected to provide Peloton with the necessary funding to carry out all these investments and absorb losses for the following years.

According to the company’s CEO, the company will become profitable by 2023, especially thanks to its growth in size and its international expansion. Indeed, given its high fixed cost structure and operating leverage, the company believes that spreading these fixed costs on a wider customer base will provide a strong push towards profitability. As an example, the company now spends a large portion of its revenues in content creation costs. These costs are fixed in the sense that a growth in the subscriber base does not imply an equal growth in the production studios and instructors required to provide high quality content to that customer base. Therefore, as the company grows, it is expected that Peloton will largely gains from economies of scale.

However, some analysts are skeptical of Peloton’s ability of having a scalable business model and have pointed out how the company has become less efficient in these years where it has grown a lot.

A further problem for Peloton is managing to retain its customer base and its future margins. Indeed, competitors such as SoulCycle and Echelon are entering aggressively into the market and often by charging lower prices. Even if Peloton's future retention ability is debatable - in particular the “mobile base” clients -, the pressure on margins coming from these new entrances will be for sure a serious issue.

By being the first mover, Peloton counts on the network effects it has already generated in its fitness platform. Given the high number of members on the Peloton platform that participate in both live and on-demand classes, the company is convinced that Peloton provides a fitness experience that is “more inspiring, more competitive, more immersive, and more connected”. Moreover, the Company aims to create a brand effects that could justify its premium prices for the coming years.

Book runners for the IPO were Goldman Sachs and J.P. Morgan, alongside other important underwriters as: BofA Merril Lynch, Barclays, UBS and Cowen.
Francesco Marino - 27/10/2019