On November 12th 2021, pharma giant Johnson & Johnson announced a split up that would see its corporation spin off its consumer-products division, known for products such as Tylenol, baby powder, and bandages, into a separate firm. The 135-year-old firm currently known as Johnson & Johnson will maintain control of its pharmaceutical and medical device business, which saw a lot of scrutiny since its release of a COVID-19 vaccine. The following article provides a comprehensive overview of the company and the industry in which it operates, while placing a special focus on the recently announced spin off, the possible reasons behind it and the subsequent effects on the market.

Johnson & Johnson is a holding corporation active in three main segments: Consumer, Pharmaceutical and Medical Devices. It is primarily focused on the research and development, manufacturing, and distribution of products which improve people's health and well-being. A variety of items used in the skin health/beauty, over-the-counter pharmaceuticals, baby care, dental care, women's health, and wound care markets are included in the Consumer section. Immunology, infectious disorders, neurology, cancer, cardiovascular and metabolic, and pulmonary hypertension are the six areas of focus for the pharmaceutical section. Medical Devices encompass a variety of goods utilized in the disciplines of interventional solutions, orthopedics, surgery, and eyesight. The Consumer Division is the smallest contributor to the company’s overall revenues (at 17% of total sales in 2020), compared to Pharmaceuticals (at 55%) and Medical Devices (at 28%).

​The pharmaceutical industry is characterized by high-paced growth, with a global market value of more than USD 1 trillion and an average YoY growth of 5.5% in the last 3 years. In 2019, the US was the largest pharmaceutical market (USD 490 billion) but emerging markets, such as China or India, are becoming more and more profitable: for the next three years, they have the highest predicted compound YoY growth rates. In this rapidly changing industry, innovation is the key to success. The high rate of M&A compared to other industries may be explained by the fact that big players in this sector heavily rely on M&A as a source of innovation capable of unlocking synergies and a way to realign their portfolio by boosting their commercial pipeline. Historically, the most stable stocks are those of large-cap companies with large R&D budgets, but smaller companies that reach scientific breakthroughs have the highest returns. There is room for huge profits despite exceptionally high R&D costs and uncertainty depending on FDA approval.

The threat of new entrants: Very Low
There are high barriers to entry, mainly due to exceptionally high R&D investments, heavy government regulation, and difficult access to distribution channels. The drug development process is highly costly due to the need for testing multiple compounds to understand the benefits and collateral effects. Historically, the few small startups that succeeded in granting a patent thanks to venturing capital funds have been acquired by entrenched players during the initial development phase.

Bargaining power of suppliers: Very Low
The costs of switching among suppliers are really low; suppliers have virtually no bargaining power. Manufacturing drugs involves commodity products with little labor input, easily available from different sources. Also, the equipment used both for manufacturing and research is standardized and can be obtained from multiple suppliers.

Bargaining power of buyers: Low
We must distinguish between Institutions (e.g. Federal Government) and individual buyers. The former buys in bulk and thus has moderately high bargaining power, whereas the latter has low power due to the nature of the product. Notably, if the medicine is patent-protected the consumer has virtually non-existing bargaining power, while in the case of generic drugs he could theoretically switch to substitutes but the switching costs are particularly high. There is no threat of backward integration and as demand is inelastic there is low price sensitivity.

The threat of substitute products: Medium and Rising
Without patent protection, manufacturers can sell copycat versions at lower prices without investing in R&D and using cheaper raw materials. The number of blockbuster drugs that lost protection in the last years is rising. Despite this, psychological switching costs and high brand differentiation attenuate this competitive force.

​Rivalry among existing competitors: High
Due to its high profitability, competition is tough. As innovation is the main profit driver, firms compete for the leading researchers. The market share concentration is categorized as moderate, and the four biggest players have over 40% of the industry’s revenue. Inefficient players are not driven out of the market due to the high non-transferrable fixed assets. Overall, exit barriers are high, especially as governments impose additional restrictions on exit.

Split-ups
J&J is the latest in a series of pharma split ups. In 2019, Pfizer spun off its off-patent drug division, Upjohn, by merging it with Mylan. Doing so allowed Pfizer to shed a division that grew at a rate of just 1% in Q1 2019, lagging behind the firm’s overall quarterly growth of 7%. Similarly, on June 23rd this year, GSK announced plans to sell-off the firm’s consumer products arm, leaving the firm with a core business aimed at producing drugs and vaccinations, targeting profit growth rates of 10% in subsequent years up to 2026. Markets responded favourably to the announcement, closing up 1% on the day of the announcement.

Increasing Importance of Emerging Markets
With pharmaceutical sales in developed countries flattening, drugmakers are increasingly looking to emerging regions for fresh sources of revenues and development. To be competitive, pharmaceutical companies will focus on global competence while tailoring tactics to local markets.
From 2021 through 2026, market research firm Imarc predicts that the worldwide "pharmerging" market — which comprises countries with a low market share but are fast-rising — will increase at a compound annual growth rate of 10.4%. The following factors, according to Imarc, are driving growth in the pharmerging market:
Blockchain
The pharmaceutical business is also experimenting with blockchain technology, which provides a transaction record to prevent data tampering and hacking. Blockchain technology, according to TechHQ, could aid the pharmaceutical industry in the following ways:
The Spin-Off

Johnson & Johnson’s split into two divisions came during a week where two other industrial consumer conglomerates split up, namely Toshiba and General Electric. But in an economy where growth is often the primary goal for firms, what is the rationale behind these breakups? One of the reasons is that conglomerates can be hard to value due to the wide range of products and markets that they participate in; some of which may be more profitable and successful than others. By breaking up into more specialised and focused subdivisions, markets can often be more efficient in correctly valuing firms. If a massive conglomerate is no longer worth any more than the sum of its parts, it may be time to split up.

1. Why Is J&J Splitting Into Two Companies?

Johnson & Johnson will split up into one Consumer Health business containing brands like Band-Aid and Tylenol, while the rest of the company will keep its businesses that focus on pharmaceuticals (mainly prescription drugs like and medical- devices businesses). The consumer division will thereby focus mainly on over-the-counter medicine, skin and baby products and other hygiene articles like shampoo. The new company is supposed to be listed as a new stock on the exchanges. 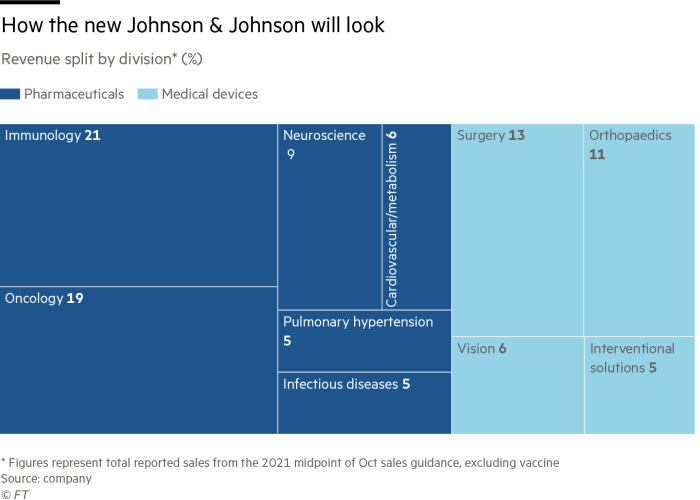 Source: Financial Times
According to J&J, the rationale behind the deal is that the two new businesses “are better positioned to deliver improved health outcomes for patients and consumers through innovation, pursue more targeted business strategies and accelerate growth.” Analysts have calculated that the break-up could unlock an additional enterprise value of 15% for the separated businesses.
In the past it became clearer and clearer that the consumer division of Johnson & Johnson needed a different business strategy than the rest of the company. Business functions like marketing and logistics differed majorly between the divisions. In fact, the consumer division is suffering from heavy competition from companies like Procter & Gamble and therefore operates in a low-margin environment with high spending on marketing. On the contrary, the pharmaceuticals division is more of a niche business field, with strong barriers to entry and Johnson & Johnson was able to produce high growth rates. The latter also invests primarily in Research and development - making the success of the business highly dependent on the success of the drugs being developed as we previously highlighted.
Another reason for the split-up is that the majority of investors prefer to decide for themselves how to diversify their portfolios, while a conglomerate of different business fields like what was Johnson & Johnson so far does not give investors this opportunity.
​
2. Markets Reaction
​
Initially, markets’ reaction to the announcement was carefully positive, with J&J shares going up by about 1.3% for the day. However, investors have given an un-enthusiastic reception to the news and shares have been flat since the new strategy was announced. 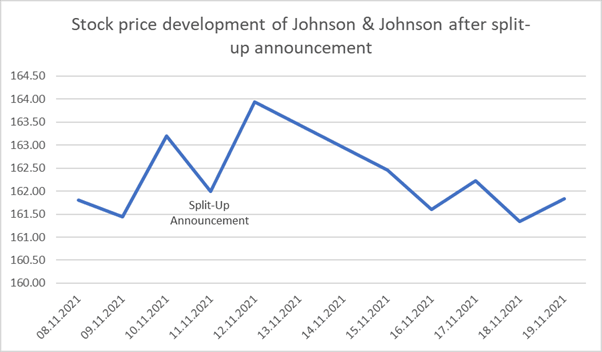 Source: Yahoo! Finance
The spin-off is planned to be concluded in 18 months to two years. This is also one of the reasons for the missing enthusiasm of investors. Even though the spin-off seems to make sense on paper, investors felt like they did not receive enough details about how the company wants to unlock extra growth-potential.
Some say that the break-up will not have a big effect on the business as the divisions operated quite autonomously already.
Others say that the split-off will have more disadvantages than advantages: one critical point seen by investors is that the pharmaceuticals and medical devices company plans to keep the name Johnson & Johnson while the brand could be much more valuable for the brand-focused consumer business. Even though the split-up is beneficial for some investors, it also signifies a larger risk for the company itself. In fact, while the consumer business always acted as a sort of buffer for varying revenus of the pharmaceuticals division, this will not be possible anymore in the future. In addition to that, Moody’s Investor Service warned about possible down-grading of the rating of Johnson & Johnson’s triple A rating.
However, when over time Johnson & Johnson works on the details of the spin-off and more information becomes available, investors might finally positively react and stock prices will go up again.

In conclusion we can say that Johnson & Johnson’s split up is lining up in a series of split ups in the market and the pharmacy industry in particular in recent months. By dividing its consumer-products section and its pharmaceutical and medical devices section Johnson & Johnson hopes to unlock additional value in the two increasingly different business fields.
Its split-up came as a surprise to the markets and even though the initial reaction was slightly positive, the share prices eventually remained relatively stable compared to the pre-announcement price, as investors are waiting for more details on the spin-off. It remains to be seen how the decision will impact the two companies in the future.