The Spanish financial group BBVA has reached an agreement to sell its activities in the US to PNC Financial Services for $11.6 billion in cash. The deal will be concluded by mid-2021.
Only BBVA Securities and BBVA USA New York, from which the company will continue to offer corporate & investment banking services, will be excluded from the transaction.
The news came just after six months from the sale of PNC’s 22.4% stake in BlackRock Inc BLK.N (May 2020), which ended a solid partnership lasted 25 years, for the value of $14.4 billion, which were probably meant to fund this investment move.
“As good stewards of shareholder capital, we have consistently reviewed options to unlock the value of our investment," PNC’s CEO William S. Demchak announced. "We feel the time is now right to do just that, realizing a substantial return on our investment, significantly enhancing our already strong balance sheet and liquidity, and leaving PNC very well-positioned to take advantage of potential investment opportunities that history has shown can arise in disrupted markets."
Besides, this is not the first time that the company grows through major acquisitions and takes advantage of struggling economic periods: in 2008, during the Great Recession, it purchased National City Corp. for around $5.6 billion in stock ($7 billion less than the tangible book value, according to the Wall Street Journal), doubling its size.
Another big M&A operation occurred in March 2012, when PNC bought the USA subsidiary of Royal Bank of Canada for $3.45 billion.
This final acquisition will result in the creation of an American bank operating in two dozen states and owning assets for $560 billion (5th in the US). 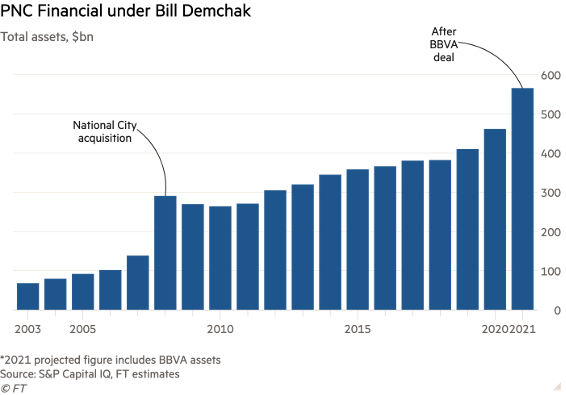 BBVA USA Bancshares, whose main headquarters are located in Birmingham, Alabama, manages assets for a total amount of $104 billion; while BBVA USA administrates over 630 bank branches in Alabama, Arizona, California, Colorado, Florida, New Mexico, Texas.
The price paid for the deal means a revaluation of BBVA’S tangible accounting value by 1.34 times, with an increase of equity tier one ratio by 300 basis points and of the proforma capital ratio by 14.5%. It would also have a potentially positive impact on net profit by $687 million.
For BBVA this M&A operation has been the result of a poor performance weighed on its stock, which has been down 36% until 13th November.
“It makes sense to divest in the U.S. because others could do better, we also believe we can grow in places where we could do better” claimed Carlos Torres, BBVA’s CEO.
After the announcement, on 16th November, BBVA’s stocks increased by 16%.

How can this operation benefit PNC Financial Services?

BBVA USA cannot be considered a high-performing bank. Even if the company holds more than $100 billion of assets and is present in many states, the metrics in bank investors’ value are quite disappointing. In 2019 (before COVID-19), the branch had an adjusted return on assets of 0.66% and an adjusted return on tangible equity of 7.03%.
Considering the business, non-performing loans amounted to 2% of total loans in the third quarter of 2020 (from 1.06% in 2019), highlighting a progressive worsening of borrower’s creditworthiness, probably due to the Covid-19 pandemic.
Despite these factors, the acquisition can be a highly strategical move for PNC, which can lead the company to become one of the biggest American regional banks, smaller only than the four national diversified banks (JPMorgan, Bank of America, Citigroup, and Wells Fargo) and the two main investment banks (Goldman Sachs and Morgan Stanley). "This transaction is an opportunity to navigate our future from a position of strength, accelerating PNC’s national expansion strategy while drawing our experience as a disciplined acquirer” Chairman and CEO Bill Demchak declared in a statement. “We’ve always had them at the top or near the top of our wish list”. In addition, this acquisition gives PNC a strong ground in Texas, the state with the fastest-growing population in North America, where BBVA holds more than $44 million in deposits.
The aim now is to fix BBVA USA’s problems and to improve its performance, service model, and geographic footprint. Demchak’s main objective, as he points out, will be to put some clarity in the fractured delivery system in terms of product and services, in addition to cross-selling their products to BBVA’s corporate client base. It has also been planned large-scale technology integration, putting BBVA on the same platform used by PNC.
This strategy, even if not simple to implement, would be able to increase PNC’s earnings by 21% during 2022 and to eliminate 35% of BBVA USA’s expense base.
After the success with Royal Bank of Canada US acquisition and integration, it needs to see if PNC Financial Services will be able to achieve its goals.