Private investments in China are undergoing a sharp decline. Over the first eight months of 2016 they increased by only 2.1% compared to their equivalent figure in 2015: the lowest increase since 2005, when the measurement began. 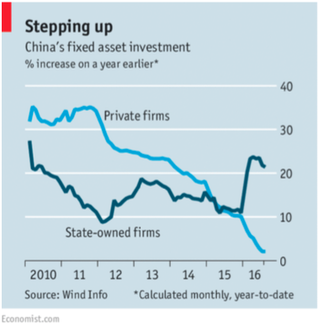 This represents a major issue for the stability of Chinese economy since, over the past decade, private investments represented over 60% of total investments, which in turn represent almost half of GDP.

The most immediate explanation would be that Chinese publicly backed entities, which have historically had better access to banks, have completed their exclusion of private firms from sources of funds. Until recent times, private companies resorted to alternative sources of financing, such as retained earnings and shadow lenders. The current economic environment, however, makes accessing to these funds more difficult: profits are no longer growing at the mesmerizing double- digit levels as they used to, and at the same time, regulators imposed stricter controls over shadow banks in order to restrain the associated risks.

At the same time, however, companies having funds available do not invest them. According to Sheng Laiyun, a spokesman with the country’s National Bureau of Statistics, this is due to overcapacity in many sectors, such as coal mining or solar panels manufacturing, although he claims that China fundamentals remain sound. According to Société Générale, return on capital is around 7%. This figure, combined with an average bank lending rate just below 5.3% explains why private firms, more concerned about their bottom line results than public companies, are refraining from investing. In addition, in the second quarter of 2016, state banks charged interest rates 6 percentage points higher than for their public-sector counterparts, according to investment bank CICC.

The situation is made more complex by local governments, which are often suspicious about private firms and are reluctant to leave them the most attractive projects. Take the PPP to build a new highway in Beijing municipality: the private partner turned out to be the state-owned China Railway Construction Corp.

Policy messages from Chinese government are once again conflicting. This summer, the National Development and Reform Commission and other related departments sent inspectors to the provinces where private investments decreased the most. On early September, the government also spurred the banks to increase lending to the private sector and disclosed some of the measure it will adopt to incentivise private investments, i.e. equal treatment than public companies when investing in sectors such as health and education and more PPPs with larger subsidies.
​
These measures might give results in the next moths but maybe they will not be enough to invert the trend. According to Tao Dong, chief Asia ex-Japan economist at Credit Suisse, the recipe would be to “break the state-owned enterprise’ monopoly, free up those profitable high-end services sectors from the grip of SOEs, and private capital interest will come naturally”. Other experts agree. Is China ready?