PSA has unveiled on March 6th the deal with which it will buy Opel and Vauxhall from General Motors with a €2.2bn payment in cash and convertible stocks. The agreement is considered to be a “win win” one where GM will get rid of its loss-making European branch and PSA will gain in terms of economies of scale and cost savings. The result of the purchase will make PSA the second largest automaker in Europe after Volkswagen Group and will reach €75bn in revenues with around 4.3 million cars produced.

Opel and the UK brand Vauxhall were bought by GM during the 1920s when the American company wanted to internationalize. The European branch brought some positive results especially in the early 1990s when Opel’s profit allowed GM to avoid bankruptcy. However, in the last 6 years, the two European automakers have seen their market share fall and don’t deliver any profit ever since 1999. Moreover, the losses accumulated by GM ever since 2010 amount to €8bn, therefore the sale of a loss-making branch makes complete sense on their side. 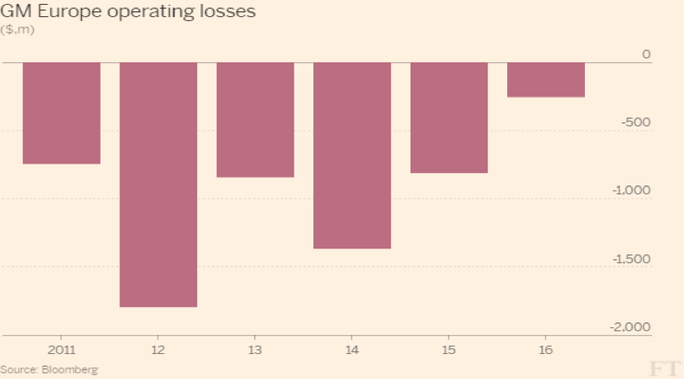 On the other side, PSA is a growing business that has recovered really well after the bailout by the French state in 2012 and is now trying to threaten the Volkswagen group by becoming the second biggest player in Europe. The CEO Carlos Tavares has in fact an ambitious plan for turning around the Opel and Vauxhall’s brands. He aims at increasing the market share as well as sharing supplies, auto parts and R&D with the two main French brands: Peugeot and Citroën. Market share will be boosted thanks to the fame that German cars have all around the world: Tavares has recently confessed that French cars have little appeal on Asian costumers therefore a German brand will for sure help them gaining a strong presence in those emerging markets. As far as cost savings are concerned, the CEO is expecting €1.7bn decrease in expenses mainly due to joint supply purchases, auto parts sharing and other synergies coming from R&D costs.

The €2.2bn will be paid in cash and convertible stock and PSA has also agreed to take over a part of the $7bn deficit of Opel’s pension plan. GM, on the other side, has agreed to license PSA all the technology that Opel had access to and will also share the electric car project that is being developed in the US.

PSA plan is really ambitious: they want to bring back Opel and Vauxhall to profit by the end of 2020 and further increase their income margin by 2026. This plan will be implemented through the above mentioned €1.7bn expense cut.

As far as the car making industry is concerned, this deal represents the last effort by big players to boost their volumes and their profits through consolidation.

FCA is really active in this sense. Sergio Marchionne, FCA’s CEO, is in fact one of the first advocates of consolidation. He in fact believes that consolidation and the consequent increase in margins will take them on the same level with American producers, thus allowing them to compete and survive. Even though this line of thinking is proved wrong by brands like BMW that enjoy high margins while producing a low volume of cars, consolidation is happening in the industry and Marchionne will always dream about teaming up with Volkswagen sometime in the future.

At the same time, the biggest fear of many car producer is the possibility of running late with technologies and to be cut off the market by new incumbents like Tesla. This fear demonstrates a new development in the auto making industry: new players can easily come up with new technologies and in a short period of time steal a large amount of market share from traditional players. The most prominent example nowadays is Tesla. For this specific reason car makers are starting to invest not only in mergers but also in acquisition of tech companies. Most of the deals are in firms belonging to the auto industry but some investments do not belong to the industry. To give an example, Audi, BMW and Daimler recently bought for $2.8bn Here from Nokia. This company allows them to get access to an important mapping software useful for the development of self-driving cars. 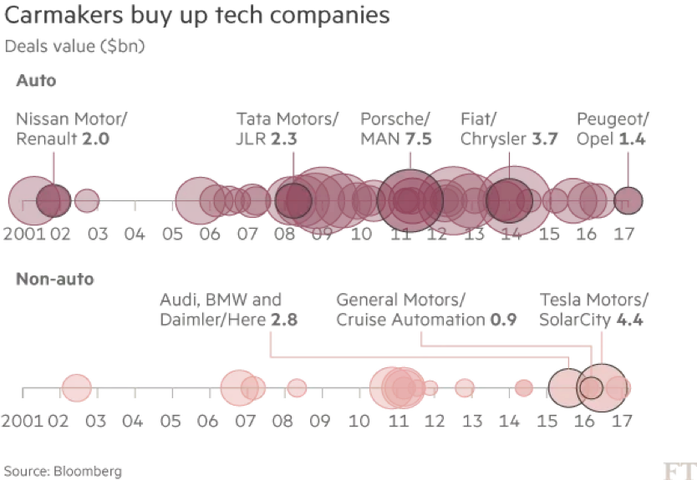 ​The PSA-GM deal contains therefore both of these aspects. The French automaker in fact will gain both in terms of economies of scale and in terms of access to new technology. It is early to see which effects this deal will have on PSA and on the European market but it for sure represents a strong move by Tavares to let everyone know, especially Volkswagen, that a new European top player is making its first moves in the auto industry.