Ray Dalio: Coronavirus, markets and where we are (probably) heading to

Coronavirus, Markets, Economic Policy. A trinomial we’ve been repeatedly and persistently hearing about in the last weeks. Indeed, what at first was considered by many a “seasonal flu” has turned out to be a highly infective virus that has the potential to overload global healthcare structures, forcing the World Health Organization to declare a pandemic.
Of course, many worldwide governments, in particular European ones, have adopted prompt and strict measures to counteract and limit the transmission of the disease. These provisions, however, will not likely be resolutive, and have as primary purpose that of distributing the contagion over time, avoiding the healthcare systems to collapse. Consequently, one of their inevitable effects is the temporary shutdown of most economic activities, likely to last more than a month. Indeed, worldwide markets reaction has been dramatic, from US experiencing officially bear market, to what it seems to all effects an incoming global recession.
And that is not it.
​
In fact, according to billionaire investor and fund manager Ray Dalio, co-CEO of Bridgewater Associates (the largest hedge fund in the world by AUM), we are approaching the turning point of a long-term debt cycle (similar to the one that happened in the 1930s). According to his view of the economy, the economic machine can be understood mainly through three elements: the long-term productivity growth (the source of rising real incomes over time, but not of cycles), the long-term debt cycle (pertaining to the level of debt in relation to income, which reflects the potential for credit growth and the responsiveness of the economy to changes in interest rates) and the short-term debt cycle (the business cycle, typically driven by the central bank through changes in interest rates). While the business cycle is given by the constant alternation of short periods (usually around 10 years) of recessions and expansions, the long-term debt cycle is characterized by the progressive accumulation of debt, over several decades (in the current cycle, since the 1970s)  and its subsequent reduction (which, according to the hedge fund manager, is going to happen soon).
​This is crucial, according to him, because, as we approach the transition phase, policymakers’ decisions are of uttermost importance to realize what he calls “beautiful deleveraging”, a smooth decline in debt burden. For this purpose, he strongly recommends MP3 (Monetary Policy 3), the combined and coordinated intervention of both monetary and fiscal policies, which can be pursued in different forms, mainly those described in the following diagram: 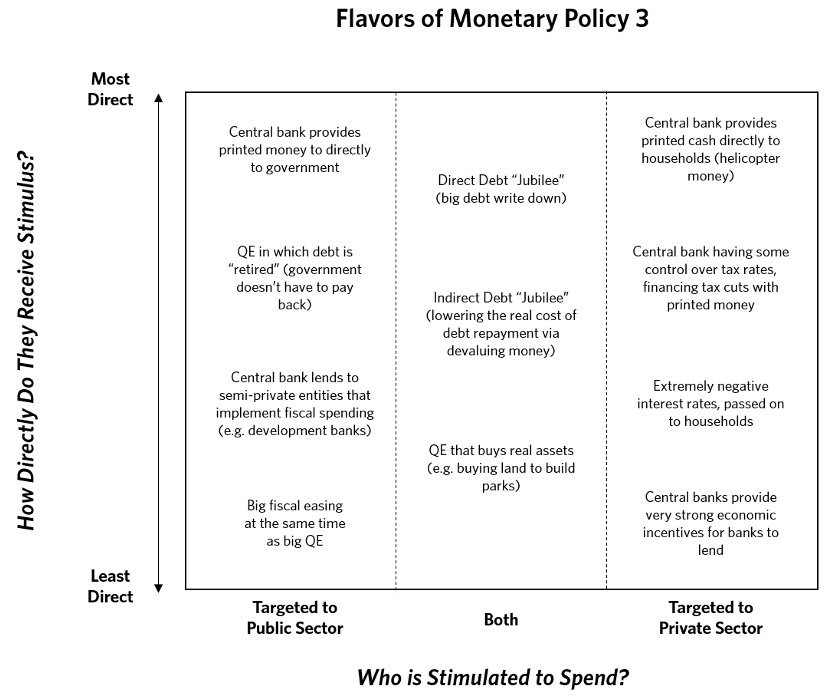 In particular, MP3 is extremely necessary (in order to increase spending, wealth, and, later, tax collected and hence decrease the debt burden), because of the (temporary) ineffectiveness of both MP1 (lowering interest rates) and MP2 (purchasing financial assets, QE), since they have benefited mostly firms (flooded with cheap money) and wealthy individuals (owners of financial assets), thus resulting in the longest bull market in US history (up to February) , but also in a large wealth gap (similar to that of 1929), which makes MP1 and MP2 temporarily inefficient to provide direct stimulus to the overall economy.
Dalio, however, warns that the success of MP3 depends on several factors, in particular legal (e.g. ECB prohibition of monetary financing, i.e. buying States’ bonds in the primary market), and political ones (due to opposing views, populism, and governments alternation).  A situation where the measures advised by the billionaire investor are desperately needed and, therefore, must be applied not only to begin a “beautiful deleveraging”, but also to counteract the economic impact of COVID-19.

It is important to notice that some countries are putting into practice some traits of MP3. A clear example of that is the “helicopter money” policy put forth by US President Donald Trump, who proposed to subsidize $1000 to every American adult, to provide both support during this time of crisis and a direct stimulus to the economy. The problem is where the money will come from, and the choice is left to the Fed’s decision makers. In fact, normally, the money the government is asking for will come from lenders, who buy bonds, but, because of the dreadful situation in which financial markets are sailing, demand is poor, and that could lead to a rise in interest rates, devastating for everyone. The Federal Reserve will then, decide whether or not to print money to buy bonds and hence, to perform debt monetization and sustain, consequently, fiscal deficit’s burden.

To conclude, COVID-19’s spread is the current “black swan” in global health and economic systems and with an exponential increase in both contagion and securities’ sell-offs, it is hard to forecast when and how this crisis (under all points of view) will come to an end. But one thing is sure and Dalio stressed it widely: MP3 must be applied, or way harder times are ahead of us, the sooner and more coordinated policymakers’ interventions are, the better it is for global economies.