Few weeks ago, China’s Renminbi formally became a reserve currency. What’s more, it happened in the same day of 67th anniversary of Communist party rule in China. It is not just a merely economic and technical issue, it seems to be more a political manoeuvre. Chinese Government has been working hard to pave the way to international acceptance. 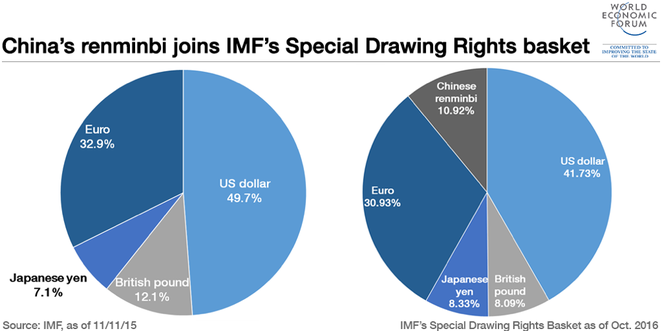 What does it mean to be a “reserve currency”? The story dates back to the 60s at the time of Bretton Wood system. In 1969, IMF created the Special Drawing Rights as an international reserve asset. its value (about 285 $ today) is based on a basket of major currencies. The SDR is a potential claim on the currencies of IMF members. SDR is also the unit of account of several international organizations. Developing countries could use SDR to gather foreign exchange reserves or to peg their weak currencies in case of fear of double-digit inflation. In 2009, SDR allocations provided liquidity to the global economic system through supplementing countries’ official reserves in the middle of financial turmoil.

Zhou Xiaochuan, chair of the People’s Bank of China, made all his efforts and leveraged his network in order to include Renminbi in the International Monetary Fund’s Special Drawing Rights. Now CNY will account for 11% of the total amount. The main goal is to reduce the overwhelming weight of the US dollar as major international currency in global transactions, but this will also help to overcome domestic opposition to currency reforms. Thanks to that, the value of CNY will be more market-determined. Eswar Prasad, economist at IMF, said “China is likely to push for a more prominent role for the SDR in global finance”.

In March 2009, when financial crisis was bursting out, Mr Zhou published a tiny but provident policy paper. He argued “The crisis reflects the vulnerabilities and systemic risks in the existing international monetary system, giving the SDR a more central role in global finance would allow the IMF to act as a global lender of last resort”. Mr Zhou has definitely a long-term perspective. Even Christine Lagarde, IMF managing director, recognised that including CNY in the SDR basket represents a signal of the imminent liberalisation of China’s financial markets. “It is an important step in the integration of the Chinese economy into the global monetary system.”

What will be China’s next move? Undoubtedly, there is coincidence between the undeclared economic war against United States and free market reforms. Total economic liberalisation is slowly approaching but, at the very moment, we cannot see the adequate political fundamentals. Will Chinese political institutions finally change? Will reforms lead to a social and cultural reversal? History will certainly surprise us.