The renminbi has been surging all-in-all this year, outdoing any expectation. The appreciation has been primarily caused by the accelerated economic recovery and the pulsating capital markets, which galvanized investors. After rising in July, the Chinese currency has strengthened steadily and managed to break through seven to the dollar, up to the point when the PBoC had to intervene in early October to cool down the biggest rally of the renminbi in 15 years. Nonetheless, not only did this minorly affect the bullish pace of growth of the renminbi but it also reinvigorated its position vis-à-vis the US dollar.

The demand for Chinese assets has been booming more and more through 2020, despite the eminently acute coronavirus crisis. The question spontaneously arises: what caused markets to buoy and hence the renminbi to appreciate? Several drivers can be reckoned.

First of all, retrenchment measures undertaken to contain the Covid-19 outbreak pressured economic activity, and thus resulted in extremely positive economic fundamentals for China. Indeed, alongside the absence of fears of a second wave of coronavirus, the Chinese country has been outperforming and playing ahead many western economies on its way out of the pandemic. Data released on 19th October (3rd quarter) display that the state-backed industrial expansion put China back on track, leading its GDP to a growth of 4.9% year on year.

Secondly, the renminbi staged its biggest rally in 15 years, also bolstered by a consistent flow of foreign investors. Capital poured into the Chinese equity market has topped Rmb 90bn ($13.4bn) in 2020, bringing foreign holdings to exceed RMB 1tn. The former was paired by an increase in investment in the bond markets which outdid Rmb 615bn, thus driving foreign holdings to Rmb 2.8tn. The snap-up in Chinese debt stemmed from investors being lured by relatively high yields: they can earn a yield of about 2.7% on 10-year Chinese government debt, against a 0.8% yield on the equivalent US Treasury.
​ 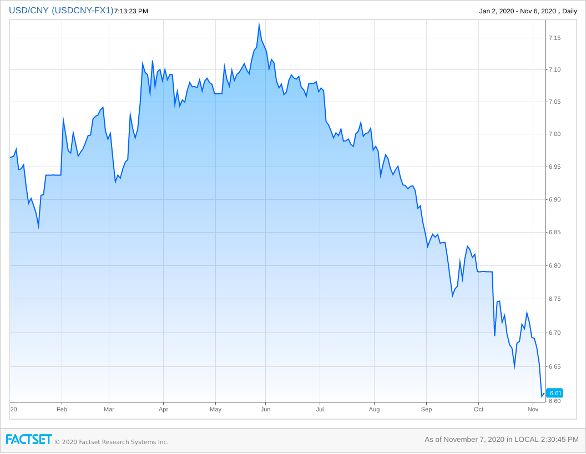 Figure 1. Renminbi's appreciation over USD during 2020
Last but not least, investors have been attracted to Chinese assets as an alternative to the US’. Indeed, the dollar has been penalized by political risks and instability due to the upcoming presidential election, the economic impact of the Covid-19 crisis and subsequent interest rate cuts. As a result, the renminbi is on track to notch its best quarter since the global financial crisis, prompted by a dollar sell-off, bets from traders that the worst of the tit-for-tat tariffs between the two countries are behind and rising expectations that a Joe Biden victory could help bridge Washington-Beijing relations.

In the wake of the abovementioned, the onshore USD/CNY has gained 4.7 percent this year, whereas the less-regulated offshore renminbi rate is up 4.9 percent. The Chinese currency gained 0.5% to Rmb 6.64 against the dollar on October 18, 2020, marking its highest level concerning the buck since July 2018 (2-year high).

All things considered, even though initially policymakers had been leaving the currency to be more market-determined – showing little resistance to the appreciation –, they eventually decided to act. A stronger renminbi implies Chinese exports be more expensive, which could hinder the economic rebound.

Following the biggest daily gain in a decade and a half, the People’s Bank of China responded to ease the purchase of foreign currencies: indeed, it announced that buyers of foreign currency forwards would no longer be required to hold reserves. Such a move depicts the willingness of authorities to tolerate some strength of the renminbi in its growth path towards a global role. Yet, they remain uncomfortable with sharp increases that could threaten the economic recovery of China.

Although the CNY sank at first, it then got back to gaining in its vigorous route of appreciation, on the grounds of its ongoing internationalization, which is bringing it to the forefront of the global foreign exchange scenario.

All things considered, strategists assume that the pace of growth could urge the PBoC to take pre-emptive action to sway markets towards expectations of either a depreciation in the renminbi or a slower rate of appreciation using the daily fix — in which it establishes a midpoint around which the CNY can trade against the US dollar.

RENMINBI vs DOLLAR: The US-China trade war impact on the CNY

The renminbi’s prospects as a primary reserve currency fortify as foreign investors expand their onshore Chinese holdings. The internationalization of a currency requires a large and liquid bond market and that's precisely the turning point in the Chinese current outlook.

The recent appreciation of the renminbi epitomizes a hindrance to the dollar in the long-lived run to the currency supremacy and the United States might exactly be the checkmate. In this regard, the upcoming November presidential election outcome will lay the foundations of the future currency scenario: indeed,  a victory for the blue wave of democrats headed by Joe Biden, whose rhetoric towards China has been less confrontational and strident than Donald Trump’s, opens up room for more renminbi appreciation.

Bottom line is, a sharp rebound in the CNY’s strength is a red flag that the greenback is likely to weaken further against the euro and other major currencies. The renminbi has now turned into a prime indicator of the buck's fortunes, undertaking the same signaling role the Japanese yen played in the 1990s.

Its thriving prominence indicates a compelling change for investors: in fact, the Chinese currency had been previously fixed or very tightly governed by the People’s Bank of China for decades, resulting in the marginalization of the renminbi in global markets.

Nevertheless, starting 2015 the currency has been gradually liberalized: it is now allowed to float more freely, and other currencies henceforth began to mirror its fluctuations. As evidence shows, the renminbi’s decline versus the US dollar in 2015-16 (more flexible trade) and again in 2018-19 (US-China trade war) foretold the vigor of the dollar against the euro. Conversely, the RMB’s 2017 revitalization foreshadowed the euro’s appreciation against the greenback.