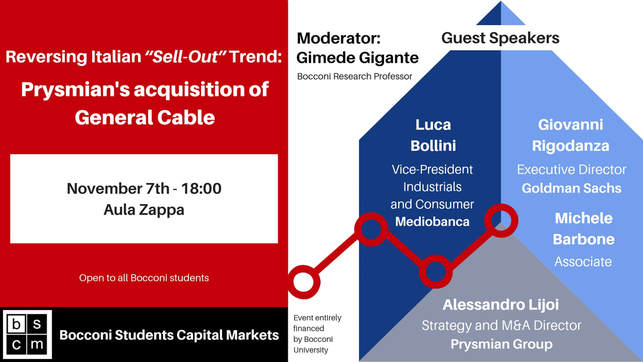 ​On the 7th of November 2018, Bocconi Students Capital Markets hosted an open event at Bocconi University, dedicated to the analysis of the acquisition of Prysmian by General Cable.

The guest speakers, protagonists of the transaction, were:
The conference was moderated by Professor Gimede Gigante.


INTRODUCTION
On December 4th, 2017 Prysmian Group announced the execution of a merger agreement for the acquisition of General Cable for $30 per share, valuing the US rival group at about $3bn, including debt (Enterprise Value). The transaction will help Prysmian enhance its global footprint and commercial presence, particularly in the America Region and in Southern Europe, further enhancing its global leadership role in the telecom and energy cable industry. Prysmian was advised in the transaction by Goldman Sachs, which provided a fairness opinion, and Mediobanca.

The Company
Prysmian Group [BIT: PRY] is an Italian public company, world leader in the telecom and energy cable industry. It operates in more than 50 countries, with about 30,000 employees and over €11bn annual sales.

History
Prysmian Group’s history is rooted in the origins of Pirelli Group: Società Cavi Pirelli was established in 1879, as the cable division of the company. Prysmian was founded through the LBO transaction devised by Goldman Sachs in July 2005, which entailed the acquisition of the energy and telecom cables and system activities of Pirelli. In 2007, the company was listed on the Milan Stock Exchange. After that, in March 2010, Prysmian became the main Italian “public company”, that being without a controlling shareholder: still as of today, no single Prysmian shareholder owns more than 5% of the Company’s capital. It is also notable that Prysmian was able to reach its current global leadership through a 40+-year-long of M&A activities, of which the General Cable acquisition is the most recent, and remarkable, milestone. As evidence of this, another relevant transaction was the successful acquisition of Draka, in 2011. The latter, which determined the consolidation of c. $3bn in sales, contributed to securing a more diversified portfolio through the contribution, among others, of Telecom, Fiber and Elevator businesses.

Business
The Group, active in the energy and telecom international cable market, provides a very wide range of products, ranging from more standard cables such as those used in the construction business, to highly technologically-advanced products, such as Submarine Energy and Telecom cables and Optical Fiber Telecom cables. Prysmian global presence is characterized by a network of 112 plants located worldwide, which allow the company to have a direct contact with local clients and offer fast and reliable services (order to delivery).

ABOUT GENERAL CABLE
General Cable [NYSE:BGC], headquartered in Highland Heights, Kentucky (USA), was originally incorporated in New Jersey, in 1927. At that time, it brought together the plant facilities and manufacturing experience of several older companies founded in the 1800s, including Standard Underground Cable, which was founded by American entrepreneur, engineer and electrical industry pioneer George Westinghouse.
A the time of the acquisition, it was the third largest wire and cable manufacturing company in the world in terms of sales (over $4 billion), operating facilities in its core geographical markets and with worldwide sales representation and distribution.

WHY DID PRYSMIAN ACQUIRE GENERAL CABLE?
First of all, the main reason behind the transaction is to enhance Prysmian’s worldwide leadership. This represents a fundamental advantage, since the Group competes in markets in which price is a key factor in the client’s decision-making process. An increased size allows the organization to achieve significant economies of scale and, therefore, create a more efficient cost structure.
Secondly, the acquisition of General Cable ensures extended worldwide presence: indeed, of the 23 plants Prysmian now has in North America, 17 were originally owned by the US rival. This increase is strategically relevant, due to the fact that Prysmian operates in a business in which local presence is an important factor. Operating in one country only is not sufficient, and it is crucial to reach a large scale and a certain capacity to better match the needs of the clients (both in terms of order size and throughput time). Hence, the transaction will ensure the possibility of exploiting General Cable’s established presence in North America. Furthermore, the transaction allows the Group to expand its operations both in the European and Latin America Markets. In the latter, thanks to the General Cable transaction, Prysmian has managed to significantly increase the number of countries it operates.
In addition, the new Group will offer a wider product portfolio and more solutions such as, among others, Overheads business and, most notably, the Datacom business in the US. Besides, the range of currently offered services will be strengthened and the company may benefit from cross-selling opportunities.
Finally, the transaction allows Prysmian to combine management expertise and best practices, leveraging on human capital talents: consequently, the group can retain the best qualified people in its organization as well as exploit the technology developed by General Cable. 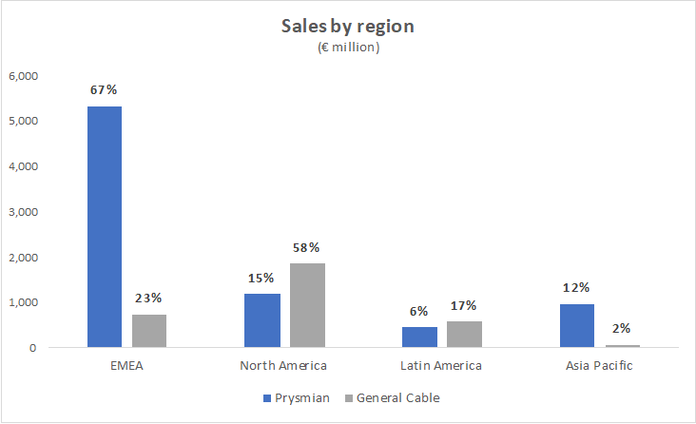 Source: Elaboration of reported figures from Prysmian 2017 Annual Report, General Cable 2017 10-K
​TERMS OF THE TRANSACTION AND EVALUATION
General Cable was a listed company, with around 50 million outstanding shares. Prysmian agreed to pay $30 per share, a whopping 81% premium over the undisturbed price – the price of a General Cable share the last day before the company announced its review of strategic alternatives. This was around $16.55 on July 14, 2017, resulting in a $1.5bn market cap. On top of that, General Cable had around $1.2-1.3bn of net financial debt, increasing the total enterprise value to around $3bn - 12x the trailing EBITDA.
Prysmian has announced €150m in run-rate pre-tax annual cost synergies to be realized within 5 years after closing, with the majority expected to be achieved by the third year. The transaction is expected to be EPS accretive in the range of 10-12% for Prysmian shareholders already within the first year after closing - pre-synergies and related implementation costs. 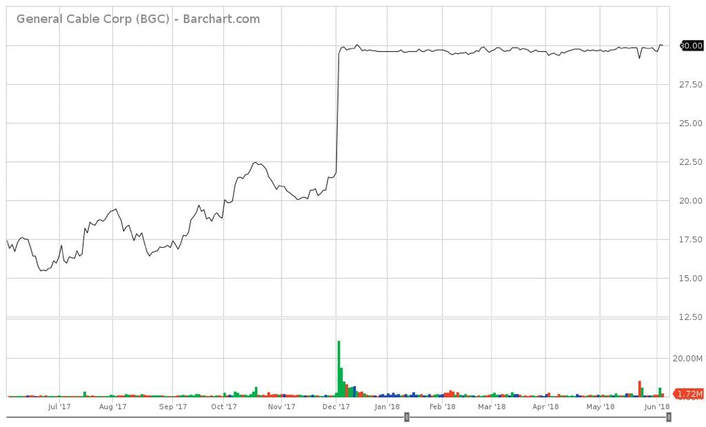 ​Was the premium price too high?
In order to answer the question, it is important to understand that the value of a company is defined as the sum of its intrinsic value, minus the risks arising from its integration, and plus the benefits from acquiring the company. In this case, € 150m of synergies times the EV/EBITDA multiple of Prysmian at the time of the deal (around 9-10x) determine a total gross value of €1.5bn. The announced synergies are “cost Synergies”, hence of lower risk, since more dependent on management skills than industry or market fluctuations and dynamics. The main sources of the estimated synergies were procurement central costs saving and manufacturing footprint
optimization. On top of that, Prysmian flagged an additional potential upside from net working capital management, not yet factored. The integration costs – necessary to extract the synergies – are expected to amount to around €220m (cumulative one-off costs) and are spread over four years.
The achievement of the synergies will depend on the management’s ability to efficiently merge the two companies into one organization. 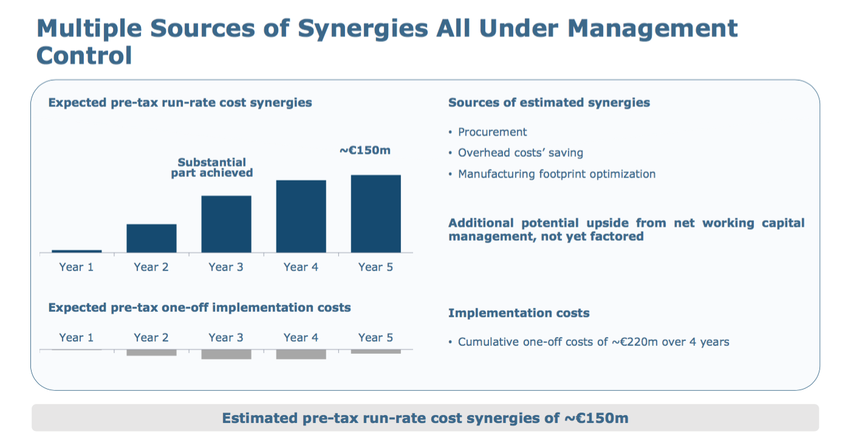 Source: Prysmian Presentation, December 4, 2017
THE CAPITAL STRUCTURE
The takeover was fully financed with cash: Prysmian had to put in place a full package prepared for this transaction, which needed to be ready at signing - since it involved a listed company. Before the acquisition, Prysmian had a net financial position close to €600m (0.8x the EBITDA), with more than €1bn of available cash on balance sheet. Nevertheless, the group had to raise additional €2.4bn: on one side, this was necessary to finance the cash consideration for the shares ($1.3bn) and, on the other side, to refinance the actual debt of General Cable - reducing its higher cost. The transaction was financed through a mix of new debt, cash and existing credit lines.
Finally, after closing, Prysmian decided to carry out a capital increase of €500m - which was wholly subscribed and completed by July 27, 2018 - in order to retain a flexible capital structure - reducing its net debt and, consequently, improving its net financial leverage ratio.

Source: Prysmian Presentation, December 4, 2017
TIMETABLE AND M&A PLAYERS INVOLVED
The transaction was announced on December 4, 2017 and was closed on June 6, 2018. The announcement was preceded by due diligence - that contributed significantly to enhance the amount and quality of information available. During the six-month period between signing and closing, three main events took place. In February, General Cable shareholders voted and approved the transaction. In March, Prysmian signed a contract with the five syndicating banks to obtain financing - until then, the Group had only obtained their commitment. After that, 7 antitrust jurisdictions – Europe, US, Brasil, Chile, Canada, Mexico and Colombia - approved the transaction. Finally, on June 2, 2018 the CFIUS - another level of approval needed to acquire a US strategic company – gave its clearance. An interesting point raised during the conference concerned the engagement level of the parties involved. A complex transaction such as the Prysmian-General Cable deal can only be successful if carefully designed and executed by a coordinated group of experts.
On the one hand, the M&A Advisors, Goldman Sachs and Mediobanca, were primarily involved from the M&A Process launch to the Signing, and gave their final contribution at Closing. The Company M&A Team was instead fundamental in the Preparation phase and in the due diligence.
Finally, the Company Organization team, while also participating in the due-diligence, will be key in the post-Closing integration process.

TRANSACTION STRUCTURE
The transaction was carried out through the incorporation of Alisea (a wholly-owned subsidiary of Prysmian) into General Cable Corporation, pursuant to the laws of the State of Delaware (USA).
More specifically, the acquisition agreement was structured in the form of a “cash reversed triangular merger”. Following the completion of the transaction, General Cable shares were delisted from the NYSE.

CONCLUSION
We take this opportunity to thank the speakers, the moderator, and, most prominently, the
engaged audience for the participation.
We find the conference has been a precious moment of learning and exchange of opinions
concerning one of the most exciting topics we deal with in Finance.