Role of the Asian companies in the development of the Metaverse

Overview of the Metaverse

​On the 28th of October 2021, Mark Zuckerberg decided to undertake one of the most daring rebranding operations the market has ever seen by taking his company to a completely new online environment known as the metaverse.

The change was so drastic that he decided to rename the company itself Meta Platforms, Inc., hence abandoning the famous Facebook name which we are all familiar with. 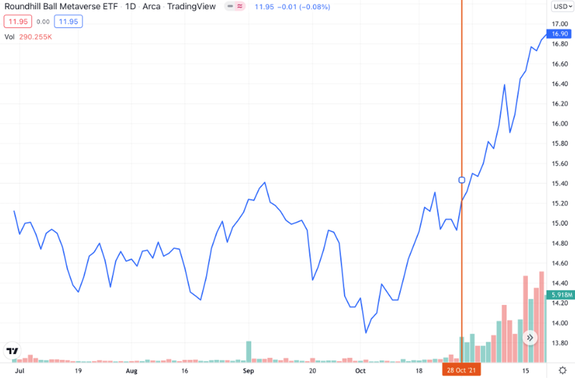 Price of the ETF on Metaverse. Source: Investing.com
But let’s take a step back and get a better understanding at what the metaverse is.
According to Investopedia, “The metaverse is a digital reality that combines aspects of social media, online gaming, augmented reality (AR), virtual reality (VR), and cryptocurrencies to allow users to interact virtually. Augmented reality overlays visual elements, sound, and other sensory input onto real-world settings to enhance the user experience.”

«What is the point of the metaverse? Does it even serve a purpose? » one may ask.
The short answer is yes, the metaverse serves several purposes ranging from networking (in a more engaging way), to doing business (just like some celebrities are starting to do, thanks to the presence of NFT marketplaces) or just shopping in AR/VR.

​
Relevance of metaverse in Asia

Whenever we mention social media or the IoT in general, we must keep in mind a very simple, yet overlooked fact: most of its users are not westerners, but Asian.
Given this statement, we quickly realize that if we want to consider the expansion opportunities given by the multiverse, it should come natural to look eastbound.
In particular, let’s take a closer look at China: with a population of more than 1.3 billion people, 68% of which actively use social media, this may represent the single biggest market for the future multiverse, and companies are not willing to give it up without a fight.
But who are the players contending this market, and what actions are they taking to secure it?


Asian players of the metaverse industry
​

There are quite a few differences between these companies and their western counterparts, differences surely cannot be ignored. First and foremost, while for western-based companies share the objective of creating a collaborative environment with many business taking part in the same online reality, Asian companies are fighting for the supremacy in the sector.
Unsurprisingly, tech giant Tencent has the edge, as its customer base perfectly coincides with the potential customer base of a metaverse reality: young people who enjoy spending time, and very often a hefty amount of money, in the online world.

Tencent Holdings Ltd (腾讯) is a Chinese multinational technology conglomerate founded by a group of Chinese entrepreneurs in 1998 with funds provided by venture capitalists. It launched its first product, QQ, in 1999 and its income is derived solely from advertising and premium users of QQ. From 2008 on, the company has seen rapid profit growth thanks to the sale of virtual goods and licensing of online games. Today, the company operates in different segments (value-added services, FinTech and business services, online advertising, and others), offering services that include communication, information, e-commerce, instant messaging services, and others, making it the world’s largest video game vendor and among one of the most financially valuable companies. Its instant messaging and social networking platform WeChat became one of the unsubstitutable apps in the everyday life of Chinese people, thanks to the unique ecosystem of applications (online gaming, mobile payments, etc.). Furthermore, it is one of the largest investment holding companies, with a portfolio of listed and non-listed companies, as it started to invest in other corporations from 2011.

Black Shark Technologies is a cutting-edge gaming technology company founded in 2017 in China. It now focuses on creating a full gaming eco-system based on hardware, software and service. The company does so through high-end hardware, software and accessories, in particular by producing flagship gaming smartphones. Ultimately, they aim to provide an unrepeatable gaming experience to its global fanbase and to create the best gaming world with global gamers. The company was financed by Xiaomi, which invested heavily in it by 2018.

After Facebook announced the change in the company name to Meta Platforms, the “metaverse” became a buzzword. In China, the best-positioned company to gain benefit from the metaverse is Tencent Holding Ltd, which announced, in January 2022, its intent to acquire Black Shark. While Meta can count on the Oculus platform for its virtual reality headset unit, Tencent planned to fill this gap through this acquisition.
Tencent reported that Black Shark will completely change its business model from the production of gaming-oriented mobile phones and accessories to AR/VR headsets after the acquisition. The deal is valued between RMB 2.6 and 2.7 billion ($410 to $425 million) which is far below the $2 billion paid by Meta to acquire Oculus back in 2014. However, Black Shark would require further investment as now it is operating in a different segment and it doesn’t make a headset yet. The reason behind this choice is the expertise developed by Black Shark in adapting games for high-end mobile experiences through the collaboration with Qualcomm chips, crucial for virtual reality and metaverse applications. Along with its own software and platform expertise gained by its leading position as a video game distributor, Tencent could approach the metaverse opportunity through multiple pathways.
According to Bloomberg’s analyst, a Tencent centered metaverse would look like this:
"You design your 3D avatar on the QQ chat app and use it in live-stream calls with colleagues on Tencent Meeting. After work, your avatar pops into a game of PUBG Mobile and wins a ticket to a virtual concert on Kugou Music. Seeing conflicting schedules, you then sell the ticket on WeChat in exchange for a new haircut for your avatar the next morning".

The leap between Meta and Tencent could take a while to be closed, as the Chinese government’s scrutiny of online content and data security may complicate things. Indeed Facebook has attempted several times in the precedent years to bring its services to China, the world’s biggest smartphone market. A state-backed think tank thinks China should be ready to set up tech and ethical standards for the metaverse and deal with the challenges it brings in areas like anti-money laundering and IP protections.