Sainsbury’s and Asda close to £15bn merger
The deal, with all its prospective benefits (and drawbacks)

After its £1.4bn purchase of Argos in 2016, the UK’s second-biggest food retailer J Sainsbury and Walmart’s subsidiary Asda are in advanced talks about a tie-up that would create ‎a more powerful rival to the long-time market leader Tesco Plc.
Sainsbury has about 28 billion pounds in annual revenue (compared with Asda’s 22 billion pounds) and the transaction would create a combined company worth £15bn including debt.

This poses serious threats on Tesco, celebrating a superb stock performance in the last month after the announcements of a 28 percent increase in full-year operating profit, an almost 30 percent reduction in net debt and the restoration of the final dividend. But it was probably its 4-billion-pound purchase of cash-and-carry chain Booker Group Plc to trigger the rival’s negotiation with Argos.

According to Sainsbury’s CEO Mike Coupe, the acquisition will to boost its EBITDA by £15m, with an ambitious £85m target. More importantly, with a combined market share of nearly 32 percent, the tie-up should surpass Tesco (at only 28 percent), leading to the rise of a new, powerful player. 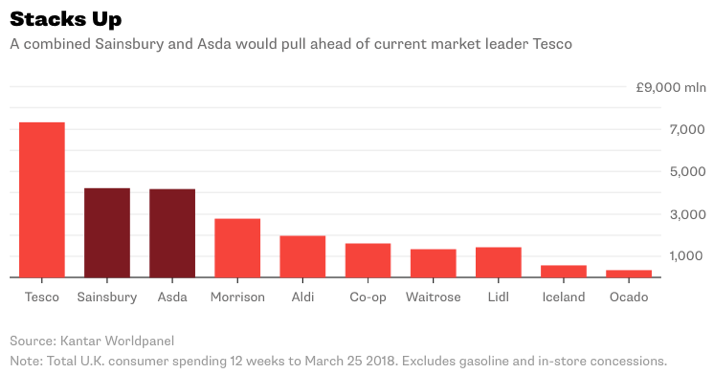 Sainsbury is focused on the south of England, whereas Asda’s stronghold is the north. The lack of geographic overlap means the penalties may be less severe to get the transaction cleared. There is the possibility to exploit economies of scale to cut costs further and enhance competitiveness, but there are other issues that shouldn’t be ignored (in particular on Walmart’s side). Indeed, the Arkansas based company has been quietly seeking to offload Asda in the past two years to focus more closely on its domestic business.

The deal comes at a time when retailers and grocers are facing immense pressure not only from e-commerce platforms like Amazon, but also from the German discounters Aldi and Lidl, which have taken a combined 12.6 percent of the market. Such burden is particularly critical for Asda, once famous for its low prices, now struggling against a resurgent Tesco and the incursion of the two German companies, which have competed aggressively on price.

Another downside is Asda’s real estate. Very differently from Sainsbury, it is primarily made up of big stores (the sort that does not appeal consumers any more) and Coupe will have its work cut out reviving those big stores.

Lastly, valuing Asda is not straightforward, given that it is not listed. But it’s surely a big deal. Even if analysts have different opinions, the majority seem to agree on 7 billion pounds. Sainsbury's market value is only 5.9 billion pounds. If it paid entirely in stock, it would have to issue Walmart a controlling stake (and neither side wants that). Hence, some cash or debt will have to change hands to keep the seller in a minority and further arrangements will be necessary.

Rothschild is advising Asda, while Morgan Stanley and UBS are working with Sainsbury’s.
But competition authorities will have the final word. The combination will surely require their scrutiny. Tesco’s purchase of Booker wasn’t opposed by regulators and this reassures Sainsbury, but Coupe should not be overconfident. This deal means a lot more for the whole market.