Sainsbury’s-Asda merger blocked by regulators: what happened and what now?

On April 24th British Competition and Markets Authority (CMA) blocked the proposed £7.2 merger between 2nd and 3rd largest UK supermarket retailers Asda and Sainsbury’s. Sainsbury’s stock price plummeted as a result of CMA ruling while Asda’s owner Walmart has lost some of its credibility in international operations. Failed merger means that with 27.4% share Tesco remains the leader of the industry while Sainsbury’s will be looking for ways to increase their 15.3% market share. At the same time, Walmart will have to make a decision what to do with the company in the competitive British groceries’ industry.

Reasons behind Blocked Merger
With the decision to block the merger, CMA has argued that this will reduce the competition in British groceries’ industry and thus would harm consumers through higher prices, reduced quality and lower choice of products. This would happen due to the fact that many Asda and Sainsbury’s are based in overlapping territories which now fosters competition and has a downward pressure on retail prices in both of these stores as well as other supermarkets. However, if two brands were merged, the downward pressure would disappear, and groceries would likely end up increasing their prices. The effect of the lower competition level would also affect the prices online and in many petrol stations across UK, according to CMA report.

Effects on Stock Prices
Effects of unsuccessful merger on Sainsbury’s stock were immense. After the announcement of the merger on April 30th, 2018, Sainsbury’s stock went up by 15% from £2.69 on previous trading day to £3.09. On February 20th, 2019, when first CMA investigation report was released, Sainsbury’s price plummeted by 19% to £2.33. With the release of the final report on April 23rd, the stock reached its 20-year low at £2.16 per share. Overall, merger talks had a significantly negative net impact on Sainsbury’s stock which fell by 20% from pre-merger price. For investors, it made clear that Sainsbury’s is too big to be allowed to make a significant acquisition and with low profit margins, that are characteristic to the industry, the stock of the British grocery retailer became less attractive than before.

Source: FactSet – Prices
As for Walmart, the investors have treated the blocked merger as a significant failure in its international ambitions. The 2% stock price fall the next morning was not as sharp as Sainsbury’s, mostly because Asda is only one of the many brands Walmart owns. However, Walmart management is now facing another issue in what to do with the brand they thought they have already sold.

Groceries’ Industry
CMA decision to abort the deal was, however, met with doubts as some argued that the British groceries’ industry is too competitive for Sainsbury’s and Asda merger to have a significant impact on overall competition level in the market. 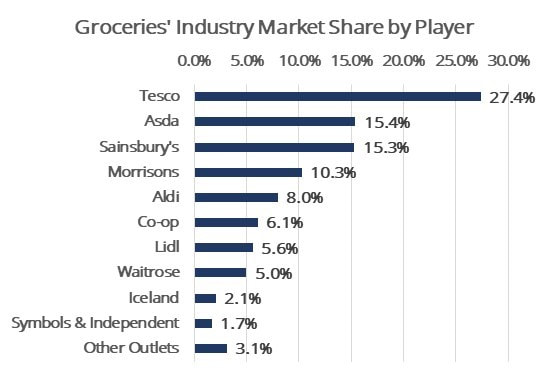 Source: Statista
In fact, in past years competition has only been intensifying. Around 2013 German “discounters” Aldi and Lidl turned to UK with a goal to diversify their business portfolio by increasing their presence here. Aggressively increasing their position among well-established traditional supermarkets like Tesco or Sainsbury’s, these retailers offered lower prices and, though with fever choice, but quality products. Since, 2013, these two brands have increased their combined market share by 94% (from 7% to 13.6%). As a result of their expansion, other industry players were forced to cut their margins and reduce prices.

Since 2013, UK supermarkets’ EBITDAR margins have dropped from around 8% to an average of around 6.2% in 2018 which makes sector unappealing for investors or acquirers, as in Asda case. Walmart, which owns brands across the world in countries like India, Japan, or South America, has been trying to get rid of Asda as it is generating the lowest returns among other Walmart’s companies.

Source: FactSet – Fundamentals
The industry has been performing pretty well in 2019 so far. The trends like demand for vegan and gluten-free products have generated higher profits than regular to the traditional supermarkets like Tesco. However, discounters and smaller stores will likely catch up and cut these margins once again.

In such a competitive landscape, Sainsbury’s and Asda merger might not have been a huge threat. However, the merged powerhouse together with Tesco would have owned 58% of the market and that could have resulted in peculiar market fragmentation where nearly 2/3 of the market are controlled by two powerhouses that sell everything from A to Z and several more niche players like German discounters selling cheaper daily products or Iceland, focusing on frozen goods. This would have meant a potentially greater efficiency in the market but at the same time some rarer-used goods would have potentially cost more than now.

What happens next – Sainsbury’s
After unsuccessful merger, Sainsbury’s is looking back at its own locations. CEO Mike Coupe has announced that Sainsbury’s will improve 400 stores while intending to maintain capital expenditure at £550 million.

The goal is to improve technology and make shopping quicker and more convenient. According to experts, nowadays’ customer performs more shopping trips for less products, thus convenience plays an increasing important role is shopping. Sainsbury’s seeks to grow by being the ones that best adjust to customers’ needs.

It also intends to continue the integration and improvement of Argos, the online catalogue retailer, of which the wider product range includes more general merchandise and also higher margin tech products for instance.

The grocer is also planning to cut prices on daily essentials and commodities to attract larger lower income customer base. It also continues increasing investments in sales online. In 2018, 14.5% of Sainsbury’s revenues came from online shopping.
Looking at broker estimates, the market does not seem convinced about the future for Sainsbury. Some EBITDA growth is forecasted for the next 3 years in absolute terms, but EBITDA Margin is still trending down.

Source: FactSet – Estimates
What happens next – Asda
As mentioned before, Walmart is seeking to get rid of its British brand as the American supermarket retail model totally did not catch on in the UK. Several acquirers are still looking at Asda, however, that will not be Tesco or any other of the bigger British supermarkets as CMA decision made it clear that any such merger will not pass. Among potential acquirers from outside is Amazon, but Asda’s low profitability and high competition in UK infuses doubt about the value added by the acquisition. Asda’s e-commerce will more likely be a redundancy for Amazon.co.uk rather than a synergy.

Multiple private equity funds are also eyeing Asda, including New York-based KKR with $150billion of assets under management, which seems like the best and most realistic option for Walmart to leave the UK market.

If no deal is made, Walmart does not reject the possibility of spinning-off the grocery and listing it on London Stock Exchange (LSE). However, recent years have shown that groceries are rather unappealing investment in LSE, hence the American giant would be unlikely to extract a good value from such move.