Saipem to consider merging with Subsea

After unsuccessful talks about a possible merger in past years, Saipem SpA is considering a combination with its rival Subsea 7 SA in one of the possible biggest deals in the oil industry to create a larger European oil services provider and defend against a downturn in the industry. The combined entity would be an oil service giant with more than $12.4 billion in combined revenues and would be placed as the fourth company in the oil service industry after Schlumberger, Halliburton and Baker Hughes. However, no final decision has already been adopted and the outcome of shareholders’ meeting is still uncertain.

About Saipem
Saipem SpA is an Italian publicly traded company originally found as a service provider for the energy giant Eni group and that later started to operate autonomously. Since its IPO in 1984 on the Milan Stock Exchange, Saipem has started numerous acquisitions to become a key player in both the offshore and onshore engineering and construction of installations (fixed and mobile platforms, seabed hydrocarbon extraction control system and transportation pipelines) and in both offshore and onshore drilling systems. The company is geographically well-diversified as it operates in Europe, South America and Middle East and has been involved in almost all projects of offshore constructions. Saipem’s has a total market capitalisation of about $ 4.9 billion and its biggest shareholder is still Eni SpA holding shares totalling to 30,54% of the share capital and Saipem annual report directly describes a negative momentum in the oil & gas industry and states that companies have to “adapt to an industrial context characterised by lower volumes, promoting a strategy of cost reduction, restructuring programs, consolidation and incorporation in order to remain competitive in the market”. 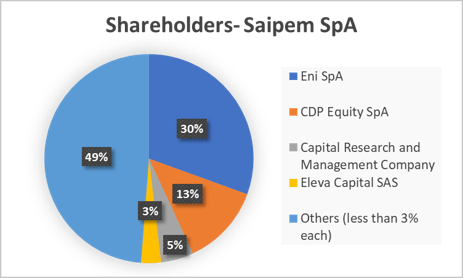 About Subsea 7
Subsea 7 SA is a Norway-listed company with a market value of about $3.3 billion and is a global leader in the delivery of offshore projects and services for the oil and energy industry. The firm’s revenues are mainly generated by three business units: SURF and conventional- the most relevant (78% of total revenues) which delivers design, engineering, construction, installation and decommissioning projects in all water depths-, life of field- which consists of inspection, repair and maintenance throughout the field life-, and renewable and heavy lifting- which delivers offshore wind farm projects. Hence, Subsea 7 is less diversified with respect to Saipem as it only operates offshore and is not involved in drilling. Subsea 7 was originally formed in 2011 by the combination of Acergy SA and Subsea 7, which previously operated in the exploration of the North Sea. Both companies were traded on the Oslo Stock Exchange and the new entity formed in 2011 retained Acergy’s Luxembourg domicile and operational headquarter in London.

​Deal rationale
All feedbacks following the rumours about Saipem- Subsea 7 potential deal have justified it as a way of responding to the recent adverse developments in the oil & gas industry and a way of exploring new possible businesses.
In 2018, the average price of oil was close to $70/barrel, significantly better from the average price of 2017. This uptrend was mostly justifiable with tensions between United States and Iran, the war in Syria and the drop of production in Venezuela. After reaching a high at October 2018, the price of Brent Crude Oil dropped of about 28% to its current values of about $55/barrel. This decrease is mainly attributable to an excess of supply of hydrocarbons in the market, partially curbed in 2019 thanks to the production cuts decided by the Vienna Alliance. The recent decrease in oil prices indirectly affects also oil services providers (as Subsea 7 and Saipem) which supply energy explorers with the support for the engineering and construction of installations. As crude oil price drops, Saipem and Subsea 7 clients reduce costs for new drilling and installation constructions, as extracting resources becomes relatively less convenient.

This leads companies in the oil services sector to adopt restructuring strategies aimed at diversifying their business and reducing costs through consolidation. Both Subsea 7 and Saipem have a strong track record of success in their core business- the so-called SURF segment- that could be leveraged thanks to combination of expertise, cost reductions and combination of technologies to better face the negative momentum. There is strong evidence of the increasing M&A activity in the Oil & Energy sector (the third industry of the year in terms of fees and number of deals) justifiable by the highly predictable trend in the oil price. Subsea 7 attempted last year to takeover McDermott International Inc. and then made smaller acquisition in an effort to expand its technology. Moreover, Eni (Saipem’s main shareholder) has acquired a $5.8 billion stake in Abu Dhabi National Oil Co’s refining unit and is engaged in a multi-year acquisition plan aimed at expanding its business and realize synergies to cut duplicated costs.
Another key driver of the potential merge is that oilfield service companies are looking to develop new lines of business probably in the construction of renewable energy installations. Both Saipem and Subsea 7 have stated goals of decarbonisation to become greener in their latest annual report and Subsea 7 has a significant business unit which delivers off-shore wind farm projects already in operation.
Finally, by combining with Saipem, Subsea 7 (which only operates on subsea’s constructions and offshore installations) would also get access to on-shore engineering and construction of installations and export and apply Saipem’s expertise to new countries and clients. This would reduce Subsea 7 dependence on offshore oil and gas activities, which are the most affected by the current trend described above.

Market reaction
Subsea 7 rose 8.4% on Oslo stock exchange on Friday (15 November) as the rumours about a possible deal became more realistic. This is the intraday biggest gain of the company stock price in the last 2 years. 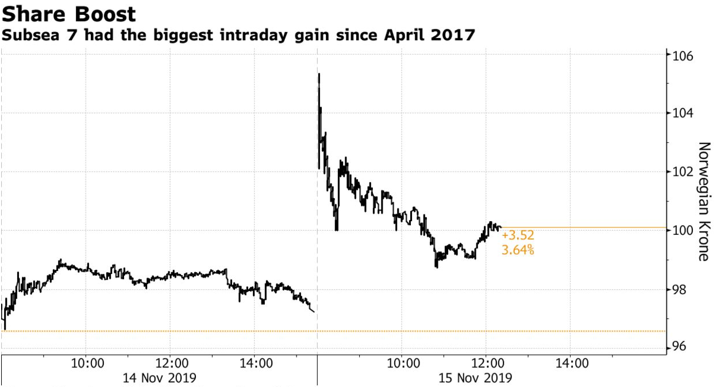 ​A similar effect happened to Saipem stocks’ price, which increased of 5.3%.