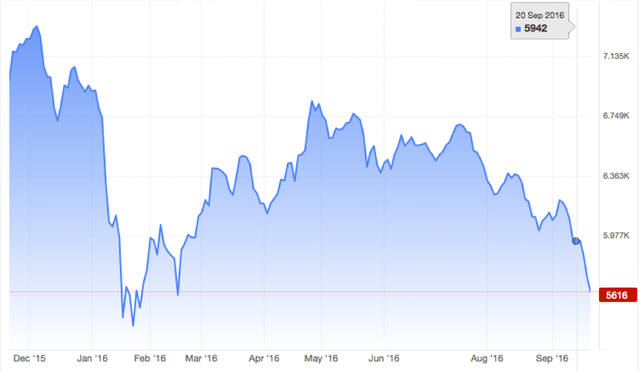 The kingdom of Saudi Arabia is currently facing growing concerns with respect to the amount of liquidity circulating in the economy. Authorities are struggling to find a way to boost liquidity levels in an attempt to improve figures which are at their lowest level since the financial crisis. Rumors that the country is entering a bearish market are confirmed by evidence on the outlook of the Saudi Arabian economy. The Tadawul All-Share Index (TASI), representing the performance of the Saudi stock market, dropped by about 2% from last week arriving close below 6000, and reaching its 30-days low on Monday the 28th at 5616.00. The Saudi Arabia Monetary Agency (SAMA), the kingdom’s central bank, has implemented a series of measures in order to solve the issue even though the situation is worsening. Attempts include both easier lending rules and direct cash injections. The SAMA offered domestic lenders the opportunity to borrow short-term at a discounted rate for a total amount of about $4 billion. In addition to this, the country’s loans-to-deposits ratio reached a peak of more than 90%, meaning that banks are now allowed to lend up 90 percent of their deposits. In the future, analysts expect further moves in this direction. However, these measures are doing little to alleviate the cash shortage that is affecting Saudi Arabian banks. The reason for these so far ineffective policies is that the government is opposing the central bank’s efforts while trying to correct the budget imbalance driven by low oil prices. Since Saudi Arabia and Iran have been fighting on oil prices, with the former trying to prevent the latter from re-gaining market share, the kingdom had to find a way to fill the gap caused by lower margins on oil. This has been done so far through draining funds from the system. The government is withdrawing deposits and raising money from bond issues. It follows that every injection of liquidity is pulled back out by the government’s action. 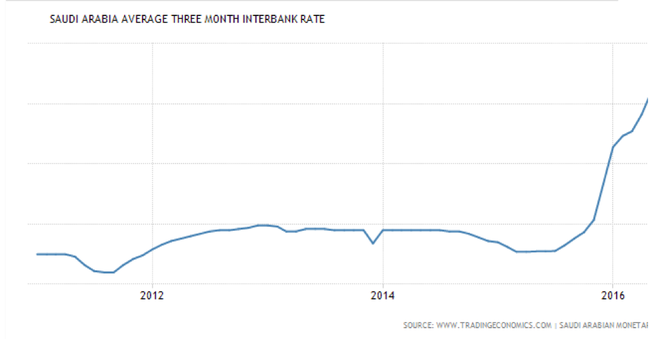 The shortage of liquidity caused by the aforementioned action is reflected in the level of the Saudi interbank interest rate which reached its highest point since 2009. The Saibor is currently at 2.3 percent, from a 0.8 level recorded in 2015.  Such a high figure makes borrowing more difficult and prevents the Saudi private sector to raise new capital and grow.
As long as the government keeps on withdrawing money from the banking system liquidity will never recover; measures implemented by the SAMA may only improve the situation in the short-term but experts have reasons to believe that eventually things will deteriorate again. 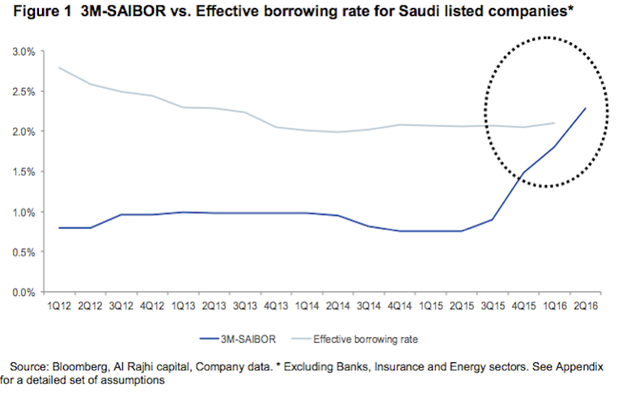