Introduction
Companies have two main ways of returning value to their shareholders: They may either rely on the issuance of dividends or on share buyback programs. While dividends have been a popular alternative for various reasons, numerous Tech companies have increasingly relied on share buybacks in the past. The present article elaborates on buyback programs by first laying down the theoretical foundations and the underlying rationale. Furthermore, the case of Alibaba, a Chinese company that recently announced an increased buyback program, is used as a practical example by also highlighting the impact on BABA’s stock price.
Rationale behind share buybacks
The repurchase of shares of stock by the corporation that issued them is referred to as a share buyback. The issuing business pays shareholders the market value per share plus an additional premium and re-absorbs the amount of its ownership that was previously allocated among public and private investors.

Share buybacks have surpassed dividends as the primary method of returning capital to shareholders in recent decades. Despite the fact that smaller organizations may opt to buy back their shares instead of issuing dividends, blue-chip corporations are significantly more likely to do so due to the costs involved.

Because corporations raise funds for their operations, acquisitions, or restructuring by selling ordinary and preferred stock, it may seem counterintuitive that they would seek to return that money. However, there are a variety of reasons why a corporation would want to repurchase its shares:
​
However, share buybacks also come with certain drawbacks. If a firm needs to borrow money to repurchase shares, it will have an impact on its credit rating. Because the interest on a loan is tax deductible, many corporations fund stock buybacks through the issuance of debt. Debt commitments, on the other hand, deplete cash reserves, which are usually required when the economy turns against a firm. As a result, credit reporting agencies perceive such debt-financed stock buybacks as a negative: they don't see increasing EPS or capitalizing on inexpensive stocks as legitimate reasons to take on debt. A lower credit rating is often the result of such a strategy.
The proposed share buyback program of Alibaba
Alibaba Group Holding Limited is a Chinese corporation founded in 1999 by Jack Ma. In 2014 Alibaba made its IPO on the New York Stock Exchange, initially priced at US$68, raising US$21.8 billion. To this day, it remains the largest IPO in the United States ever. Since 2015, Daniel Zhang has been the CEO of the company.
Alibaba is mostly specialized in e-commerce, retail, Internet and technology, providing C2C, B2B and B2C transactions via web portals. Initially, the Alibaba Group included five subsidiaries: Yahoo! China; Alibaba.com (for B2B sales); Taobao (the marketing platform); Alipay (the online payment system); and Alibaba Cloud computing. The Alibaba group then split into seven business, separating Taobao, China’s current largest shopping website (similar to eBay) from Tmall, which offers a variety of branded goods. The company also made Alipay its business affiliate together with Ant Financial, forming the Ant Group.

During the years, the company began to deal with more and more spheres of life, developing a more complex structure made up of several different groups with their own autonomy. Unlike Amazon, Alibaba itself does not sell and ship items to consumers. It helps buyers find products and suppliers quickly and efficiently. The company generates revenues mostly by charging fees to sellers who have a storefront on the website, but also trough commissions on some transactions, premium memberships and cloud computing services.

Alibaba’s biggest shareholder is the Japanese tech firm SoftBank with approximately a 25% stake. Despite its large stake, it has little control in the operational activities of Alibaba, since it ceded much of its shareholder influence to the Alibaba Partnership. The latter is a group pf executives and longtime employees, including Ma, who must have a “meaningful” equity stake on the company, exert control over its activities and nominate most of the board members. This structure, where the executives can act almost unilaterally, was rejected by the Hong Kong Stock Exchanges, which is one of the reasons why Alibaba could not be listed there.

Alibaba has increased its authorized buyback plan from $15bn to $25bn in a program that will be effective for a two-year period through March 2024. It is one of the largest shareholder-reward programs in China’s internet industry. The company also appointed a new independent director in Shan Weijian, chair of Hong Kong-based investment group PAG. He will replace Ericsson Chief Executive Officer Börje Ekholm from March 31.

The company has already acquired 56.2 million American depositary shares (of 2.71bn outstanding shares) for $9.2bn as part of the program. It is the third time it upsizes the buyback from 2020, and the second in a year. Indeed, it had increased the share repurchase program from $10bn to $15bn in August 2021. Zhang confirms Alibaba would continue buying back shares, arguing “The market has not placed enough value on Alibaba’s business”.
The e-commerce group has lost about 65% of its value from 2020 and the whole Alibaba Group reported its slowest quarterly sale growth since its IPO in 2014. In the final quarter of 2021, the total revenue grew only 10%: Since its IPO in 2014, Alibaba had never before reported year-on-year quarterly revenue growth below 20%. We can identify two main reasons behind this difficult moment for the company.
​
First, Alibaba Group is facing growing competition both from traditional ecommerce groups Pinduoduo and JD.com and from new entries, such as ByteDance’s Douyin, which is Tiktok’s sister app in China and helps influencers hawk goods through short videos and livestreams.

Second, The Chinese crackdown on the tech sector in 2020, with the strict technology regulatory environment caused the last-minute suspension of Ant Group IPO, which was set to be the world’s largest IPO with a value of $37bn. Since the moment that the Chinese authorities cancelled the IPO, the whole e-commerce group started its period of multiyear slowing growth. Furthermore, in April 2021, Chinese regulators imposed a fine equal to $2.8bn against Alibaba Group for abusing its dominant position over rivals and merchants on its e-commerce platforms.
Anyway, after the change in the buyback program, Alibaba’s Hong Kong-listed shares closed 11.2 % higher. Shortly before, Xi Jinping and Liu He, China’s top economic official, followed then by China’s State Council, promised that Beijing would support and boost the economic growth and finish the clampdown of the tech sector as soon as possible. After the declarations, the company’s stock grew more than 40% . Both market reactions are depicted in the graph below. 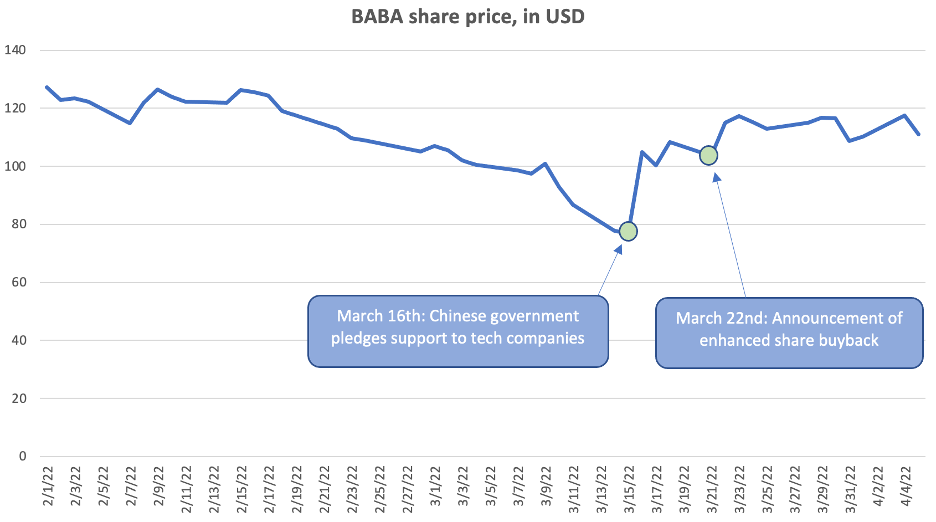 Conclusion - Impact of stock buybacks on the overall economy
Stock buybacks may be beneficial to a company's bottom line but may also impact the overall economy. Stock repurchases may have a somewhat favorable impact on the economy as a whole. They have a considerably more immediate and favorable impact on the financial sector, since higher stock values are the result. However, the financial sector feeds into the actual economy in many ways, and vice versa. Increases in the stock market have demonstrated to improve consumer confidence and facilitate significant purchases, a phenomenon known as "the wealth effect."

Lower borrowing rates for firms are another way that advancements in the financial system affect the actual economy. As a result, these businesses are more inclined to expand their operations or invest into R&D. As a result of these actions, individuals' prospects of borrowing to purchase a home or establish a company increase, as their household balance sheet improves.