​Should we fear the rise of the robots? Gives and takes of the technological evolution

Since the industrial revolution, the advent of human-replacing automated machinery has been worrying and challenging people of all times and places. One of the most evident consequences of this happening has been the struggle of people who saw their job taken away and replaced by machinery and, what’s worse, few and nearly irrelevant social and economic advantages in return. As a matter of fact, John Stuart Mill observed that following the industrial revolution, from 1800 to 1870, working-class wages had grown at just 0.4%.

By now, we are used to seeing labor and physically striving tasks performed by machines instead of men, but the development of technology is widening the field of application of automated devices in such ways we wouldn’t have imagined few years ago. As this happens, we are getting more and more used to living and working in close contact with technology, although two different schools of thought keep arguing about the future: those who believe in a technological takeover and those who wish for a peaceful coexistence. The former is very skeptical about the future and fears damages will be harsher than advantages.

Truth is, nowadays we are probably wrong just like Mill was in the late 19th century:
after his first analysis, researchers showed that from 1870 to 1950 the wage growth rate tripled to 1.2%. This would mean effects may not be evident in the short run, but in the long run proof of change can be significant.
According to a Deloitte study, technology has multiplied job places from 1871 to 2011. Nurses and health workers increased by 90% and teachers along with jobs in education rose by 580%; in contrast, farmers and laundresses decreased by 90% and over 80% respectively.
In addition, a recent McKinsey research points out that technology is going to create 2.6 working places for each one it is going to destroy and only 5% jobs will disappear; forecasters predict jobs could decrease quantitatively in the next few years but will improve qualitatively, by having a higher added value and being more niche (experts have estimated that two thirds of elementary students are likely to have a job that still doesn’t exist).

Who contrasts the concept of a positive technological advent affirms that the 19th century and nowadays are incomparable: numbers are rising increasingly and the current growth seems too fast and widespread compared to the past.
Still, many fields of application trust the benefits technology can bring, which can sometimes prove to be revolutionary.

To mention one, the field of asset management is being taken over by Fintech societies: alternative financial services that differ from traditional banks as they offer financial advice by means of automated platforms. The so called robo-advisors are addressed to every kind of investor and have the qualities of being easy and affordable.
In order to receive financial advice, the users just have to answer some questions on their investment objectives and risk profiles. The automated online service will provide them an algorithm based portfolio management resorting to ETFs and indexed funds with the possibility to be enriched with mutual active and passive funds. The lower minimum investment requirements and the cost-effectiveness of the robo-advisors are the main drivers of their success: their commissions reaches only 0,25% whereas mutual investment funds demand 1,31%. That’s why many enthusiastic investors are starting to rely on them, putting at risk job places.

In order to have a view of the actual approval of this method, Bloomberg surveyed 3000 charted financial analysts worldwide. 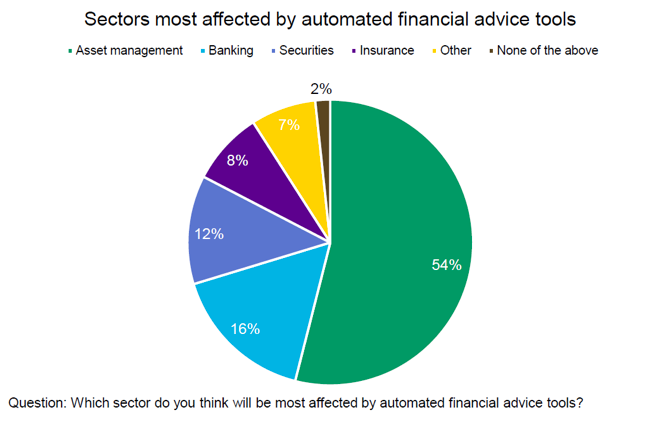 54% of them stated the entire world of finance should fear job replacement, adding that the industry most at risk from disruption by financial technology is asset management, precisely. The biggest benefits from automated advice are predicted to be felt by the mass affluent market, moved by the incentive of lower costs and increased access to investing guidance. In contrast, ultra-high earners don’t believe automated financial tools are likely to replace humans: 46% of them fears flaws in the algorithms for which robots are known could prove to be an issue, 30% expects bad financial advice and 12% is worried about privacy. 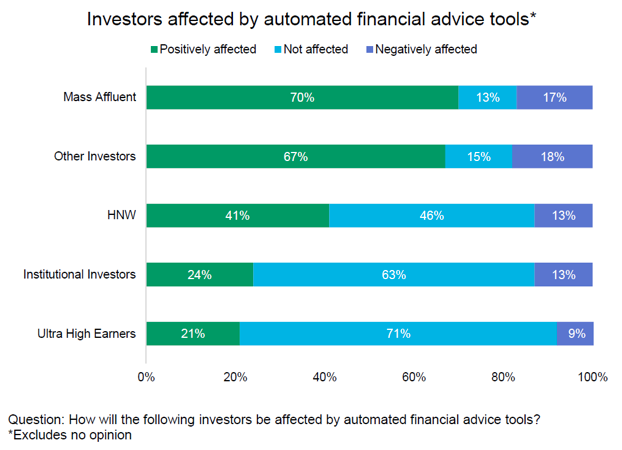 Technology is striking hedge funding as well: MANA partners’s Manoj Narang claimed to focus its work on computer-driven investing decisions, known as quant and alternative data strategies, combined with high-frequency trading. Quant funds are attracting capital, but could be limited by the fact that models are often created by non-economists who lack in familiarity with market microstructures and macroeconomics. This barrier could prove to be significant as many model-makers, who know and use same analytic techniques, may find similar information and strong signals may result to be fake because of overfitting. Narang’s attempt is to try analyzing new kinds of data to bypass this problem: information about credit card payments and selling trends, impact of weather on retail sales, to mention a few.

As a result, the best solution seems to be the just a partial replacement of human advisory, compounded to technological factors: Fidelity added the Fidelity go robo-advisor service to its range, Blackrock bought the Future Advisor platform and Invesco acquired Jemstep. This way each service can address different clients, needs and goals.

What researchers focus on is the importance of the human factor, which guarantees creativity and look to the future, whereas most algorithms only extrapolate from the past. After all, it takes a human to predict what a human will do.