IPO market in 2020
2020 has been an extremely tumultuous year for markets with continuous shifts from bullish to bearish sentiments, not only because of the pandemic but also due to other major events such as Brexit and the trade war between US and China. Nevertheless, the global equity market surpassed $1 trillion in issuances, with more than $350 bn in contributions by the APAC region.

With regards to IPOs, there were more than 1400 transactions of this type in 2020, raising up to $331 bn, with a growth of more than 60% in comparison to 2019. This strong growth trend is expected to drag on also in 2021, which is considered by many as the year of global recovery. As a matter of fact, the strong momentum generated in Q3 and Q4 shows a growing interest in IPOs by many companies. 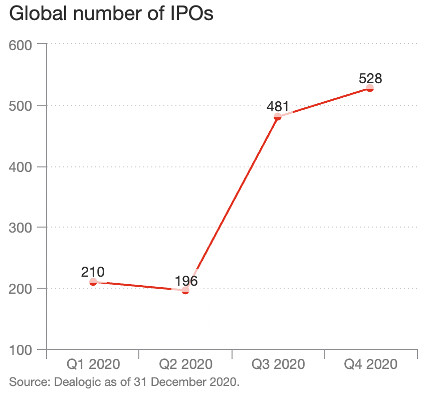 Moreover, the market is taking advantage of low interest rates, government stimulus and low inflation. One of the biggest contributors to this phenomenon is the APAC market, which accounted for more than 50% of 2020 global IPOs.

A focus on South Korea

Between the most important players of APAC, we must mention South Korea, as its equity market is the fifth biggest in the region by market capitalization. Indeed, during last year, the South Korea’s IPO market raised more than $4 bn. This boom is imputable to a strong increase in retail demand. In fact, South Korean retail investors, which are characterized by a particular appetite for risky products, are trying to exploit the current market exuberance (driven by the post pandemic recovery and super low interest rates) to earn greater returns. 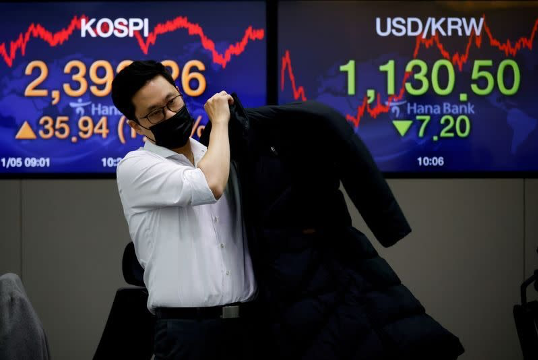 Source: Reuters.com
​According to some estimates, the country’s IPO market would be able to raise more than $18 bn, as the financial regulator is introducing new guidelines which would facilitate the allocation of IPO shares to retail investors. David Chung, head of Korea investment banking at Goldman Sachs, says 2021 is expected to be a “record year” for the country. “The majority of big mandates and IPO themes are around the technology sector”, he added.

In fact, there are strong signs of growth in the market, as the Kopsi composite index has gained up to 80% over the past year. The optimistic expectations about the South Korea’s IPO market are mainly driven by recent and expected equity issuance transactions, that are characterized by a considerable size. This month, the ecommerce company Coupang, considered by many as the Amazon of South Korea, raised $3.5 bn through its IPO on the US market. Moreover, other companies such as Kakao Bank (rumors suggesting a potential 4.6 trillion won float) and Krafton (expected 5 trillion won), a gaming company best known as the developer of the famous PlayerUnknown’s Battlegrounds videogame, are considering going public and have already picked financial advisors. Eventually, LG Energy Solution, a Tesla car battery unit supplier, is considering a 9 trillion won IPO.

Another interesting transaction, even if smaller size-wise ($1.3 bn – 1.5 trillion won) with respect to the aforementioned ones, is the IPO of SK Bioscience completed on March 18th.

SK Bioscience Co Ltd is a biotechnology company specialized in the development and production of innovative vaccine technology, which was spun off from SK Chemicals in 2018. During the years, the Company has laid the groundwork to compete into the global healthcare market. In fact, in 2005 SK Bioscience established its first vaccine R&D center and in 2012 completed the Andong L House vaccine center. From this moment on, SK Bioscience established many successful partnerships with companies such as Sanofi Pasteur and it is currently working with AstraZeneca and Novavax for the production of COVID-19 vaccines. Moreover, the Company has received  the approval to begin clinical trials of its own COVID-19 vaccine in November.

The transaction offered 15.3 million new shares and 7.65 million existing shares. At the end of the transaction the largest shareholder, SK Chemicals, still holds a 68.4% stake in the company. During the filing process, the IPO was priced at the top end of the marketed range at 65,000 won per share (range of 49,000 won to 65,000 won). Thanks to the issuance, SK Bioscience raised up to 1.5 trillion won, making this IPO the country’s largest since Netmarble 2.7 trillion won IPO in 2017. Overall, the IPO raised more than 2020 South Korean biggest IPOs of Kakao Games and SK Biopharmaceuticals.

Source: Capital IQ
The results obtained by SK Bioscience follow a trend of high valuations that is currently characterizing the South Korean biotech industry and, more generally, the equity market, thus raising concerns of many analysts about a potential overvaluation. However, SK Bioscience, rather than other biotech companies, is backed by strong financial data in terms of sales and net profit that make it more than a bet on its future growth. Moreover, in order to justify such a reaction from the market that reflects buoyant expectation, it is important to mention that the company has announced they will reinvest the IPO proceeds to improve their contract manufacturing capacity and develop new vaccines.

In conclusion, we must say that SK Bioscience transaction is in line with the strong growth trend, which is characterizing the IPO market, especially the South Korean one (and more generally the APAC region), thus confirming the analyst optimistic expectations not only for the specific country taken into exam, but also for the global equity market.

​Want to keep up with our most recent articles? Subscribe to our weekly newsletter here.
​