Snap Inc., the parent company of Snapchat, had a great day on its debut on the New York Stock Exchange. After pricing the IPO at $17 per share, the stock opened at $24 and then closed the day at $24.51, resulting in a 44% premium relative to the IPO price and corresponding to a market valuation of the group of about $29 billion. 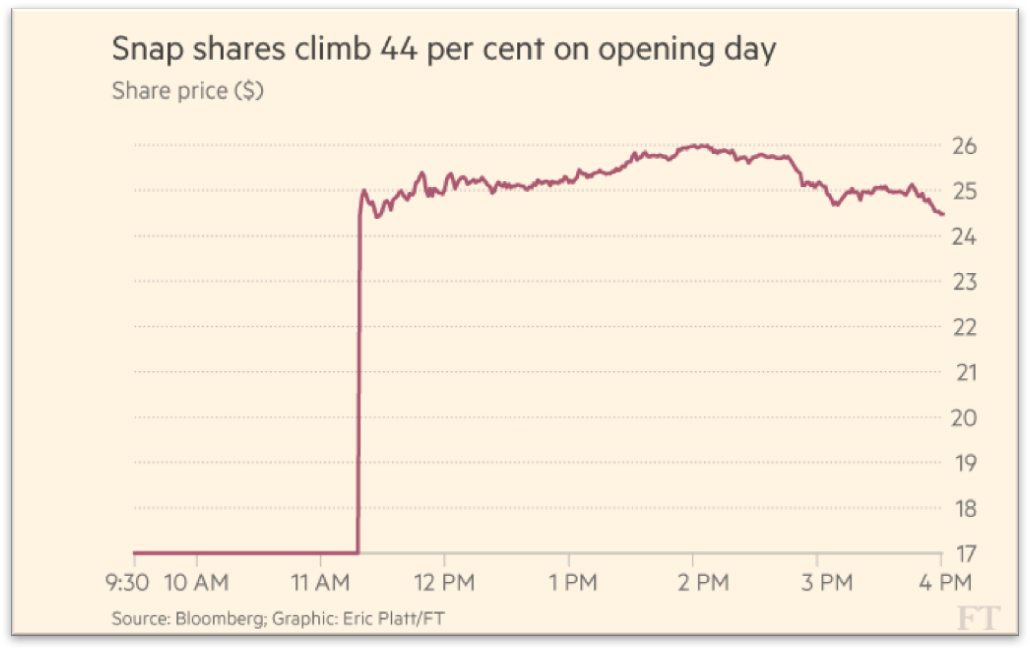 ​Its market valuation at the IPO, of about $20 billion, implies a multiple of roughly 21.4 times the EMarketer’s estimate for Snap’s 2017 advertising sales. This means that the company went public at a valuation at least twice as expensive as Facebook Inc., and four times as Twitter Inc..

Some rumours attribute the huge success and dimension of Snap IPO to two main factors. First, investors are keen on buying into Snap IPO especially because it is the first social-media IPO since Twitter’s more than three years ago and the first tech company to list in the US this year. Indeed, there is always a huge number of people that want to get in on the “hot new thing” and this is seen as the first opportunity of this type in a number of years. Second, as Hemant Taneja, managing director at General Catalyst Partners, said “the company has done a good job in setting expectations at the right level”. Snap’s pitch to investors is very different from those of Facebook and Twitter; indeed, while the two aforementioned social network companies emphasized the fact that they were trying to become a global brand, Snap, on the contrary, underlined to be willing to focus on developed countries. In addition, the company does not want to be measured primarily on the basis of user growth, a metric that harmed Twitter since its IPO. Instead, Snap will ask investors to focus on the level of engagement of its users with the app, and on the amount of per user revenues the company will be able to generate. 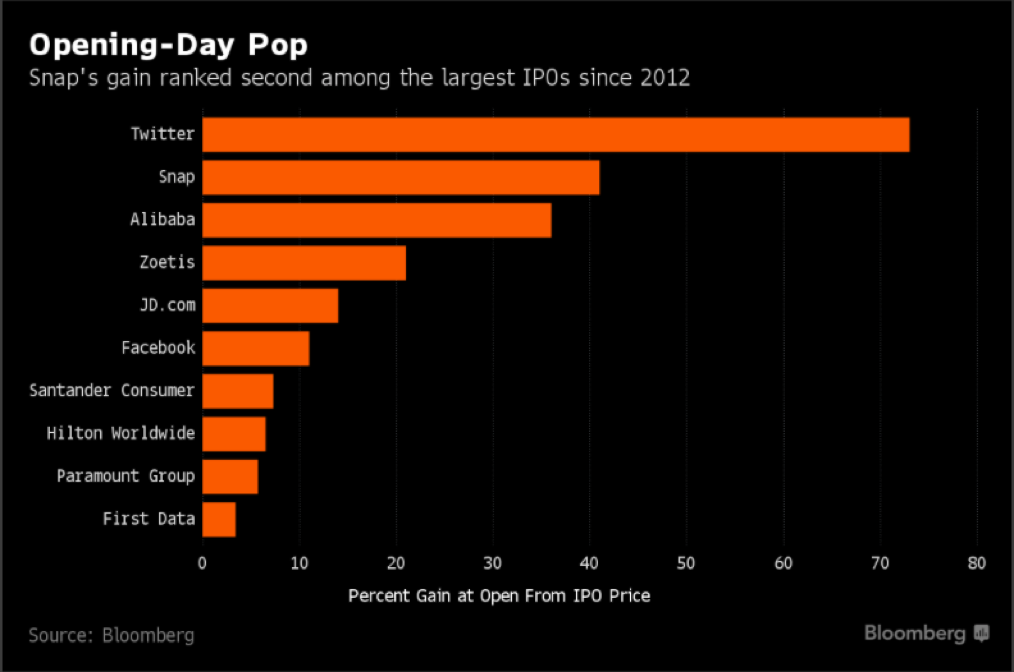 When it comes to what will happen next, Snap will for sure be keen on following Facebook’s trajectory over Twitter’s.
On the first day of trading, Facebook surged by less than one per cent and suffered for more than a year. Once the company strategy of betting on mobile software started to pay off and revenues and profits adjusted accordingly, its price started to rise until reaching, as of today, a valuation of $397 billion. Twitter, on the other hand, had an extraordinary early run after its 2013 IPO and then started to stumble as soon as user base growth hindered.

Snap is dealing with the same situation that Facebook and Twitter previously faced but is trying to frame it differently for the future. In fact, instead of being entirely dependent on its Snapchat app, the company managed to change its name a couple of months ago in order to emphasize the fact that it will be a portfolio of many products such as the Spectacles video-capturing glasses, and other experiments to come.

Despite the enthusiasm surrounding Snap IPO, investors are not left without concerns about some key issues the company is facing.
To start with, one key concern is related to the company’s decision to issue shares with no voting rights for investors, the first and unique example of this kind in the US, and to ensure a lot of power to the co-founders by granting them control even if they leave the company. Then, another critical point is the slowdown of Snapchat's user growth. In the fourth quarter of 2016, Snap reported the slowest growth rate for any of the 12 quarters for which it disclosed information. Even if the company during pitch meetings with prospective investors tried to conceal this problem by saying that it has focused more on quality rather than on quantity of users, some still worry about this significant slowdown.

Moreover, another alarming aspect is competition. Lee Bressler, at Carbon Investment Partners, said "Instagram's Stories feature is a direct competitor and will continue to take market share". The question of whether Snap should be concerned about Facebook and Instagram, that Facebook owns, was an important element of the roadshow both in New York and London. On the one hand, Snap has a reputation for innovation; on the other, Facebook is a $390 billion giant with deep pockets and a huge user base.
Lastly, Snap’s monetarization is frightening some investors. Snap has only recently started to focus on monetizing its users through advertising and a five time increase in revenues by 2018 has been forecasted by Goldman Sachs; yet some are worried about Snap’s niche demographic and the management team’s ability to execute future plans. So it looks like the success of the sale and advertising part of Snap’s business is still to be determined.

In conclusion, Snap’s IPO is of extreme relevance also because it could strongly affect future US tech listings of present Unicorns (start-up companies valued over $1 billion). In fact, many people are eager to see whether Snap’s potential future success will entice more of these companies to the public markets, thus creating more opportunities for investors.