A couple of days ago the Wall Street Journal reported that there are rumors of Snap Inc. going public, probably by late March 2017 and the company has just chosen its book runners leaders: Morgan Stanley and Goldman Sachs. If this turns out to be the case, the parent company Snap Inc. could then be valued at $25 billion and become one of the largest IPO technology companies.

The latest two big IPO Internet companies are: Alibaba Group Holding Ltd in 2014, which so far has been the biggest IPO of all times by raising 25$ billion at a valuation of $168 billion and Facebook in 2012, of a total offering size of $ 16 billion with a value of $104.2 billion.

This would mean a significant change for Snapchat, after deciding that it was time to shift from Unicorn phase to public company.
The camera app has rapidly grown since it was launched in September, 2011, in the living room of the father of CEO Evan Spiegel. Originally Snapchat was Spiegel’s final work for a product design class in Stanford. His basic idea was to create an app to share spontaneous and funny photos in a safe way, something that was missing in the digital world. He and his friend Bobby Murphy noted this lack in the market. During the years they continued developing it, increasing its “features”, such as adding new lenses (animated overlays), allowing the possibility of creating your own story and introducing geostickers and geofilters (decorations connected to specific locations).

Initially the startup was a no-revenue company since it did not sell ads or in-app purchases nor charge users for the download. As its popularity grew however, venture capitalists saw the potential source of revenues of a long term investment in a Web company.
In May of 2012 Snapchat received $485K of seed funding from VC firm Lightspeed Venture Partners. After that, in February, 2013, Benchmark Capital led a $13.5M round of Series A funding. During the years that followed the startup kept raising capital until its last F round funding in May, 2016, in which it raised $1.8 million at a “flat valuation” of $16B.
​
Current investors are:  Alibaba, Benchmark, Coatue Management, Dragoneer Investment Group, Fidelity Investments, GenBeral Catalyst Partners, Glade Brook Capital Partners, Institutional Venture Partners, Kleiner Perkins Caufield & Byers, Lightspeed Venture Partners, Meritech Capital Partners, Sequoia Capital, Spark Capital, SV Angel, Tencent Holdings, Yahoo, York Capital Management.

Now Snap Inc. has reached a total value of $17.8 billion for investors with a total equity funding of $2.4 billion, which means a valuation-to-funding of 7.4 to 1. 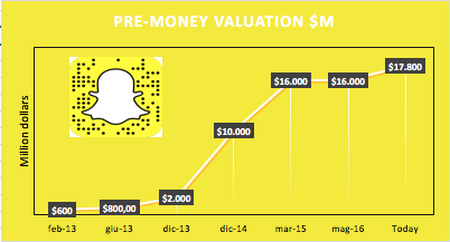 After the VC firms became interested, the second step was to adopt and implement a revenue model. In October, 2014, Snapchat started inserting ads to the app, the first one being a 20-second trailer for horror movie Ouija, paid for by the studio of Universal Pictures. At present, advertisement prices go from $100,000 per day for national campaigns and $450,000 per day for custom lenses. The company has also diversified its advertising portfolio introducing sponsored geofilters and in January, 2015, it launched Discover. The “new entry” is a media hub that contains daily “Editions” from media partners and Snapchat’s production team. These are daily stories made by a mix of photos, videos and text and interstitial advertising which have become the new equivalent of cable TV for millennials and “Generation Z”. Some of its media partners are: CNN, Comedy Central, Cosmopolitan, Daily Mail, ESPN, Food Network, National Geographic, People, Vice, Yahoo News, and Warner Music Group. 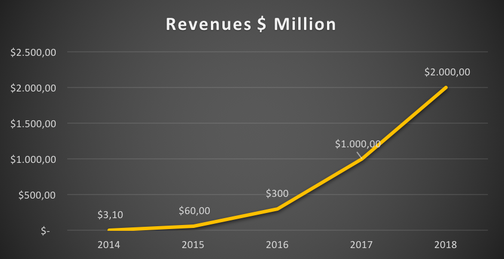 Now the question is: “Is the $25 billion valuation well grounded?”. Considering its steep growth rate in revenues --- $60 million in 2015, an expected $250-350 million in 2016 and a $1 billion target for 2017 --- it might be worth this much. This is due to its huge user base (150 million daily active users so far of whom roughly 60% are between 14 and 24 years old) for which companies are willing to pay thousands of dollars for ads; for this reason, the company is monetizing very quickly, much more than Facebook did at its times.
After the last funding round, the startup is structuring its “business model”. On September 24th Snapchat changed the name of the company to “Snap Inc.” in order to maintain its products and the business information separate as it grows. It then launched its first ever hardware product: Spectacles, a pair of sunglasses with an integrated video camera that enables customers to make videos and directly upload them on their Snapchat account via Bluetooth or WiFi.