The age of social media has changed the whole world as no trend did before, and now social media is a parcel of the everyday life of users. Due to the immense potential of social media, the global social media market is expected to tread along a healthy growth track. The scene is dominated by US and Chinese tech giants, and therefore, in March 2021, the SoftBank-backed Z Holdings merged with Line, reaching a market capitalization of $43bn, in order to become the third force in the social media landscape and reshape the industry as US giants did with previous mergers.

The social media market consists of entities providing tools that allow people to interact, even in different areas of the world, and share content and information. This market includes revenues from sales, advertisement and other services offered on social media platforms. The market is segmented into social media advertising and social media subscriptions.
The global social media market was worth $94.83bn in 2020, and it is expected to grow at an annual rate of 8.2%, reaching $102.62bn in 2021. This growth is mainly due to the COVID-19 pandemic, which forced companies to rearrange their operations, to adopt restrictive containment measures involving social distancing, remote working and the closure of commercial activities, to recover their losses. The market is expected to reach $308.96 billion in 2025 at a CAGR of 32%.
In 2020, Asia Pacific accounted for 46% of the global social media market, thus representing the largest region in the market. In the second place there was North America, which accounted for 32% of the global market. Indeed, these two regions showed the highest social media penetration rate among the industry.
​ 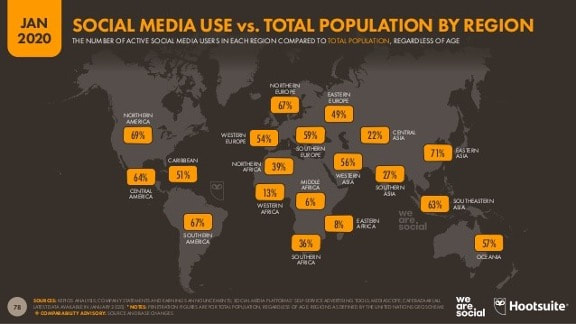 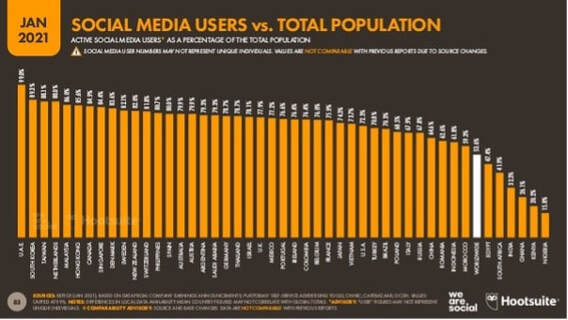 When compared to the other regions, in most Asian countries, instead of US tech giants like Facebook and Twitter, native platforms dominate the online scene. Some of the most known social platforms are WeChat, SinaWeiBo, Line and Tiktok.
Tiktok, also known in China as Douyin, is a video-sharing social networking service developed by Chinese company ByteDance. Nowadays, it is one of the hottest apps on the planet. Indeed according to Hootsuite’s CTO, Ryan Donovan, Tiktok has reached over 800 million monthly active users – up 300 million from January 2019, becoming the seventh social platform in the world. Its success, as stated by various executives, is attributed to its convenience to use and the reform of the “standard” social media platform concept. 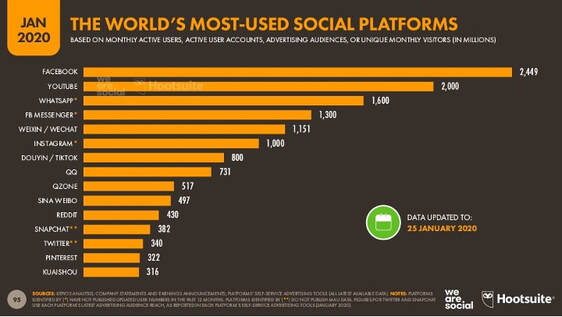 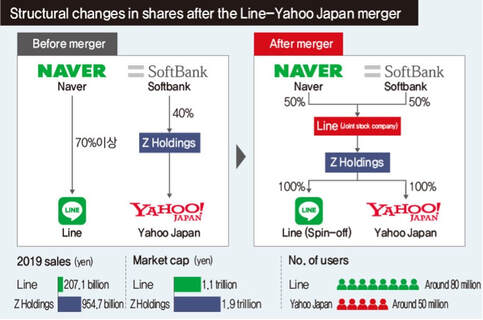 Source: Original data analyzed by PitchBook
The merged tech giant has, as of March, a combined amount of 300 million users across messaging, online news and financial services. The majority of their userbase comes from Yahoo Japan, which has 68 million monthly users on its mobile app, and Line, which has about 167 million users spread in East-Asia, mainly in Japan, Taiwan, and Indonesia.

The original Z-Holdings, that is before the merger, was born as a joint venture between the Japanese telecommunication colossal SoftBank and the American internet company Yahoo! in 1996. Z-Holdings’ main business is based on the search engine Yahoo Japan, which was one of the first search engines to take a hold in Japan during the rise of the information technology market. It then expanded its business through further acquisitions, and its portfolio of services include e-commerce, online payments, online travel and online video. Through its e-commerce subsidiary, the company tried to counter the increasing presence of Amazon Japan and Rakuten, the two biggest providers of such a service in Japan.

On the other hand, Line is an instant messaging and social networks services app owned by Naver Corporation, a South Korean company focused on development and engineering, operating the search engine Naver in South Korea. Line was born following the catastrophic earthquake in the Tohoku region in Japan in 2011, and quickly began the main instant messaging app in the country. It became Japan’s biggest social media in 2013. It expanded its operations worldwide, though the majority of the userbase is concentrated in Korea, Japan, Taiwan and South-East Asia. 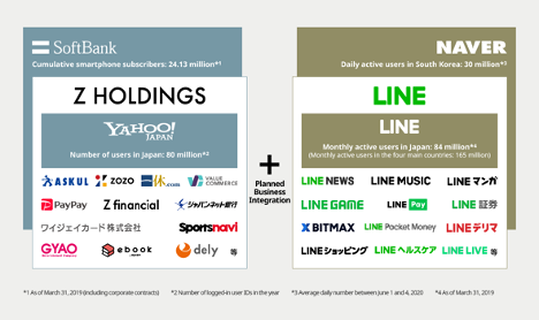 Source: original data collected by Statista
SoftBank and Naver decided to go through with the merger in order to create a global competitor to the main social network providers from the US and China, and to expand their online services globally. The objective was to gain market share in the fast-developing South-East Asia, and to pool resources together to pursue investments in AI and data analysis.

The merged company, with a total valuation close to $43bn, will benefit from cost synergies and growth synergies. The company is targeting a combined amount of sales of 2 trillion yen ($19 billion) in FY 2023, which is clearly higher than the combined sales the two companies reported in FY 2019, which was around 1.28 trillion yen. Moreover, the company said that they planned on becoming the biggest social media provider in Japan within the first few years of 2020s.

As it can be seen in the table above, SoftBank and Naver planned on merging their e-commerce service and, most importantly, their online payment business. Z-Holdings offered the online payment app PayPay to its customers, whereas Line group had also its own platform named Line Pay. The integration will happen in 2022, and it will create a valid competitor to the giants Alipay and WeChat pay in China, and the global competitor PayPal. Furthermore, the two companies will integrate the operations of their online video and news division, though they will be kept as separate entities.

Takeshi Idezawa, co-CEO of Z-Holdings, told at a press conference that "[they] would like to launch a global smartphone app” through investments in companies with SoftBank Group's nearly $100 billion Vision Fund.
Kentaro Kawabe, the other Z Holdings co-CEO said that they wanted to counter the ever-increasing strength of GAFA, an acronym for Google, Amazon, Facebook and Apple.
In order to achieve their goal, the company backed by SoftBank plans to invest $4.7 billion over the next 5 years and hire 5,000 AI engineers, so that they can improve their online services, increase their reach outside of Japan, and focus on developing artificial intelligence technologies.

Yahoo Japan-Line giant to face Viber and WeChat: where the Asian social media industry is going

One of the major critiques to the Z Holdings-Line merger is the hypothesis that the two companies combined will still be far smaller than their competitors, either compared to other domestic players such as Rakuten and to bigger names like Tencent and the GAFA conglomerate, in terms of revenue, market value and research budget. This casts a shadow over SoftBank’s founder Masayoshi Son’s desire to use the transaction to compete against bigger groups in China and the US, to the point that the deal has been defined as a measure for the two companies to survive in Japan, rather than to actively compete against global players.

Shin Jungho, Line’s founder, has gradually implemented the messaging app with options for payments, banking and other fintech businesses, which renders Rakuten its immediate competitor: among its businesses, Rakuten Ichiba constitutes the company’s main asset and one of the largest e-commerce platforms in Japan, whereas Viber is Rakuten’s messaging app, offering both texting and shopping services upon its download. As of January 2019, Viber has been used in 193 countries and has gotten 260 million monthly active users, with Ukraine making up 24.24% of the app’s traffic and Russia coming in a close second place with 18.59%.

Even though the merger will give Z Holdings access to neighboring markets in Indonesia, Thailand and Taiwan, it will have to compete against one of China’s largest and most prominent companies: Tencent, whose revenues for 2020 were $73bn and which controls about 40% of the market for electronic consumer payments through its WeChat Pay and QQ Wallet platforms, embedded into the main messaging apps, WeChat and Tencent QQ. WeChat is defined as China’s “app for everything” and totalizes over 1 billion monthly active users: because of its versatility, it has a large range of influence especially when compared to traditional e-businesses like JD.com and Alibaba, which lack the social media aspect.

Now more than ever, though, the time is appropriate for the Z Holdings-Line merger to happen, and that’s because Tencent has recently come under the scrutiny of Beijing’s government and, differently from previous antitrust investigations it has undergone, has been fined for issues over investment approvals and seen one of its planned mergers be halted, not to mention that its fintech core business seems in a very delicate position after the Chinese government has sanctioned Alibaba’s payment branch, Ant.

It is undoubtable that, even combined, Yahoo Japan and Line are smaller than Tencent and therefore smaller than the Silicon Valley group comprised of Google, Amazon, Facebook and Apple, and that the new entity will have a hard road ahead to prove itself on the south-east Asian market and eventually on a global scale, however there are some noteworthy points to be made on why now was the right moment for the action to happen.

Firstly, even though Facebook’s CEO Mark Zuckerberg has outlined a strategy that would drive the company’s future towards a merging of Facebook, WhatsApp and Instagram’s services – a step that Line had already taken upon its founding, in 2011 –, too many doubts remain on how the new gigantic conglomerate would make money from such a move, especially considering its profits largely come from advertising on the various news feeds. One potential solution could be the selling of metadata, which is the context surrounding a message that can be viewed even though the content is encrypted, or, in other terms, the data’s data. This, however, seems uncertain: given that both Europe and the United States are actively debating ways on how to dim Big Tech’s power, and that digital privacy is already a sensitive topic, it’s doubtful that such a big merge can be achieved this way.

One additional important factor at play is the state of the social media industry in the Asia-Pacific market as of 2021: even though last year overall advertising expenditure dropped by 8.5%, from $177.70bn to $162.61bn, the sole social media ad spend on mobile device is projected to grow at a rate of 15.4% between 2019 and 2024. Not to mention that a report from EY shows how 53% of Asia-Pacific companies included in the survey are actively planning to pursue mergers or acquisitions in the next 12 months, despite the risks and uncertainties posed by Covid-19, with technology being the leading sector in these deals: one of many examples is Baidu Inc.’s acquisition of social media company JOYY Inc., a strategic move that shares the Z Holdings-Line merger’s goal of containing Tencent’s growth.

In conclusion, it’s reasonable to think that the Z Holdings-Line merger happened at the right time, whether to defend a spot in the Asian market or with much bigger aspirations already on its agenda: important projects are already on the way, and the group’s co-CEO Takeshi Idezawa has stated that expanding the business in food delivery, ride sharing and e-commerce is on the radar; this task will be executed thanks to the potential tie-ups with Vision Fund-backed companies, such as the Indonesian e-commerce group Tokopedia and the ride-hailing and food delivering app Grab, giving the Z Holdings-Line group an additional edge to compete against the aforementioned rivals.